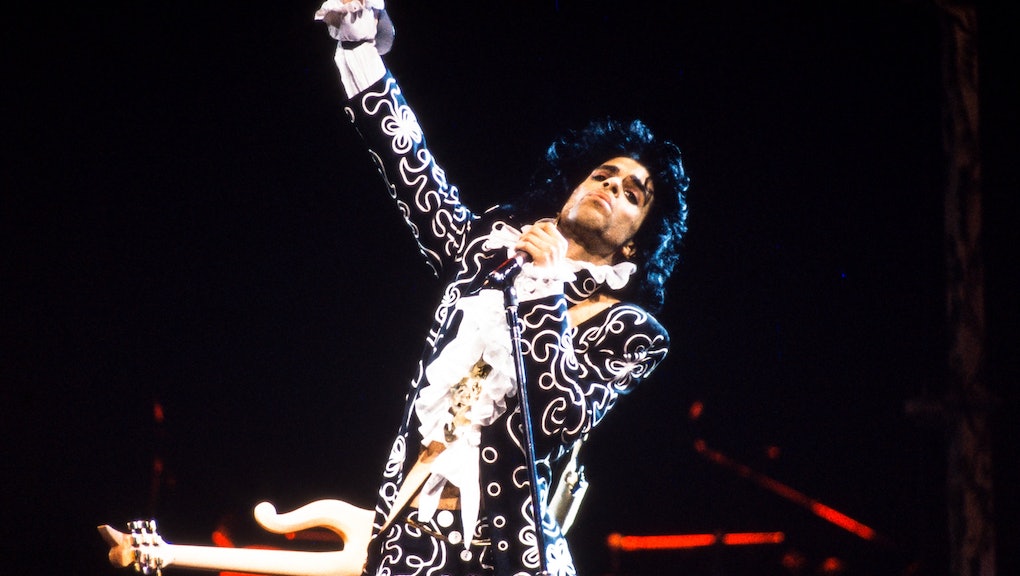 Purple Rain made Prince a superstar, but he soon grew tired of the material and brought the accompanying tour to a halt in April 1985, less than a year after the album’s debut. Journalist and documentarian Duane Tudahl’s new book Prince and the Parade/Sign O’ The Times Sessions: 1985-1986, out June 10th from Rowan & Littlefield, is a day-by-day account of the mercurial musician’s life as he created some of his most enduring work during a time of personal and professional upheaval.

The book begins with an enthusiastic foreword by Sir Elton John, recalling this era as “Prince’s great moment, when he was writing one incredible song after another.” During these two years, Prince wrote and recorded hits like “Kiss,” “U Got The Look,” “If I Was Your Girlfriend,” in addition to the hours of shelved material released last fall as part of the Prince estate’s Sign O’ The Times reissue.

Tudahl interviewed over four dozen people for his book, including members of the Revolution, engineers, and associates, in addition to quotes from other historical sources and extensive studio documentation. “Sometimes I had people cry when they tell me stories,” he tells Mic. “When you have somebody doing that, you want to make sure you respect the story, and the truth, and the performer. And they're telling me these things because they want to extend Prince's legacy.“

Tudahl hopes the book is reflective of his respect and love for Prince and his collaborators’ music. “It's not just a thing to get up and shake your ass to, it touches you. And when you're going through a breakup, or you're going through a heartache, or an excitement, or first date, or love, or whatever it is. He has a song for you.”

How did you make the connection with Elton John for the book’s foreword?

My wife and I were watching a fundraiser for the World Health organization where Elton John appeared. And we were sitting there talking and I said, "Wouldn't it be cool if Elton John wrote the foreword?" We both laughed about it because it was so far-fetched. And the next day, an old friend of mine named Mathieu Bitton, who is also a Prince expert, reached out to me and said, "How would you feel about Elton John writing your foreword?” He knew Elton's husband David, and suggested it, and they read the book back in September and really liked it. And then one morning I woke up to an email from Mathieu that said, "Here's the foreword," and I read it and started crying. And read it to my wife and she started crying. It's humbling. It's mind blowing. I grew up as a huge Elton John fan, one of my first albums was Goodbye Yellow Brick Road and Rock of the Westies … that's the stuff a kid memorizes. The funny thing is, I don't know how I top this. There's probably three or four people out there that are probably his peers. So I may have gone too far too fast.

What was your process for researching this book?

I had been researching the first book [about the Purple Rain era studio sessions] for about 20 years, and writing along the way, so I was researching other periods at the same time. It always comes down to if there's an interesting story to tell. The first book is about the rise of Prince to superstar, as big a performer as you're going to get. You're never gonna be able to maintain that. The second book is about what happens when you're at that level and it's this journey. It's about Prince’s brilliance and genius, and sometimes it's about him being a little bratty. He's 25, 26, 27 years old, on top of the world, with a lot of stress. That's how it's gonna be. I don't think that's a flaw. I think that's just a revelation about him as a person. I don't want to deify the guy, I want to make sure that the story is honest, and truthful, and as respectful as possible. And it's told by the people who are around him. The people were there, the engineers, the band members, the singers, and having them ... talk about where Prince was, in a way that's first person, as opposed to guesswork.

Beyond interviews, what documents did you use for research?

I got a lot of the work orders from Sunset Sound Studios, which is where a lot of this book takes place, where he was recording in Los Angeles. Other studios, too. Each one says in the book, the date, time, what songs, that stuff. If somebody was in the union and recording, whether it was a guest harp, or Eric Leeds, who was doing sax, or Matt Blistan who was doing trumpet, and (The Revolution members) Wendy & Lisa many times, would be billing things to the unions. So all those things can be documented too. Then you go to the Library of Congress, which has a series of dates that songs were copyrighted, so you can kind of backtrack there. So I know it was copyrighted by this date, so it had to be recorded before then. Then you also go to the individual people that had diaries, journals, billing documents. It's a giant Tetris, and you're putting all this stuff together. Also there's a lot of music that circulates between collectors. Band members may have had some stuff, or memories of songs. Rehearsals that float around out there.

What rare or unreleased music did you hear in the course of this book?

Those kinds of songs help tell the story because oftentimes, it's not only what got released, it's what didn't get released that's of interest, because those are the experiments. And sometimes it's just a sketch, sometimes it's a full-blown song he tried, and he goes, “This doesn't really work for me for this project.” And that's the cool thing about Prince, is he can do great songs, and not put them on the album because they don't fit the theme.

So do you have a favorite outtake or experiment or anything from this era?

I would say my favorites from this era are "When the Dawn of the Morning Comes," which is like a gospel-type song. I like "Cosmic Day." And those two are stuff from the fall of '86. [Ed. note: both songs appear on the fall 2020 Sign O’ The Times reissue.] So it's after the Revolution broke up, and that's interesting because music was flowing out of this guy. I think he had something to prove to himself after that.

What surprised you as you were working on this book?

The thing I walked away with, was how much the people who worked with him loved him and got frustrated with him. The first chapter is all about him being on the Purple Rain tour, and then recording an album while he's on tour. His day would be wake up, probably a phone call or two, travel, soundcheck for three or four hours, show, then afterwards he was in the studio, oftentimes writing and recording a new song until morning, then they'd jump on a plane and get to the next place. The amount of work they did and how hard he drove everybody, you see this guy was obsessed with making music. Then he goes to take a vacation in Rio. And he goes there for two days. And he flies home, he was like, "I was bored, I want to get back in the studio."

If there's a surprise, it's the revealing of why The Revolution broke up. To all of us, we just saw them on stage having fun. You hear the pieces that are falling apart, the arguments, and the frustrations, and some of that came out as music, but you also see the struggle to hold this together. At the end of the book, you realize where he is. After The Revolution broke up, his engagement to Susannah Melvoin, who was an inspiration for so much of this music, is broken up. Warner Bros. doesn't want to release his album. And what he does when he's that sad is go back in the studio, and that's his way of communicating. It reveals all of his character, in the sense that when he's in pain, or when he's going through this, he goes back in the studio, and bleeds. “Here's my life.” You see the artist that he is, and it makes him human.

I think the book does a great service to someone like Prince who does have this mythos about him. It is revealing to see all the work that he did as a very human person with an almost inhuman work ethic.

And it seemed magic to people because they don't understand he worked hard. He drilled his band, and it was hard. There were times that the band said it’s not fun. He's like, “I'm not paying you to have fun. You're not having fun, the audience has to have fun. I'm paying you to play!” With Prince, you are on. And if you're not on, you're getting fined. James Brown did that. To drill your band that hard, if you're on stage with Prince, you're on stage because he invited you. And if you are on stage with him more than once, it's because he liked what you did. And that's the bottom line. If he doesn't, you're not there. If he doesn't appreciate what you do, you're not in the room. And if you're in the room, there's a reason you're in the room. And that's one of the reasons I wanted to talk to all these people.

More like this
Lil Nas X’s ‘Montero’ is a vulnerable guidebook on self-acceptance
By Brandon Yu
Lil Nas X delivered his baby, 'Montero,' along with an ill-fated love story
By Kara Weisenstein
The moral of Nicki Minaj and the Tale of the Giant Balls? We need to explain vaccines better
By Kara Weisenstein
Stay up to date