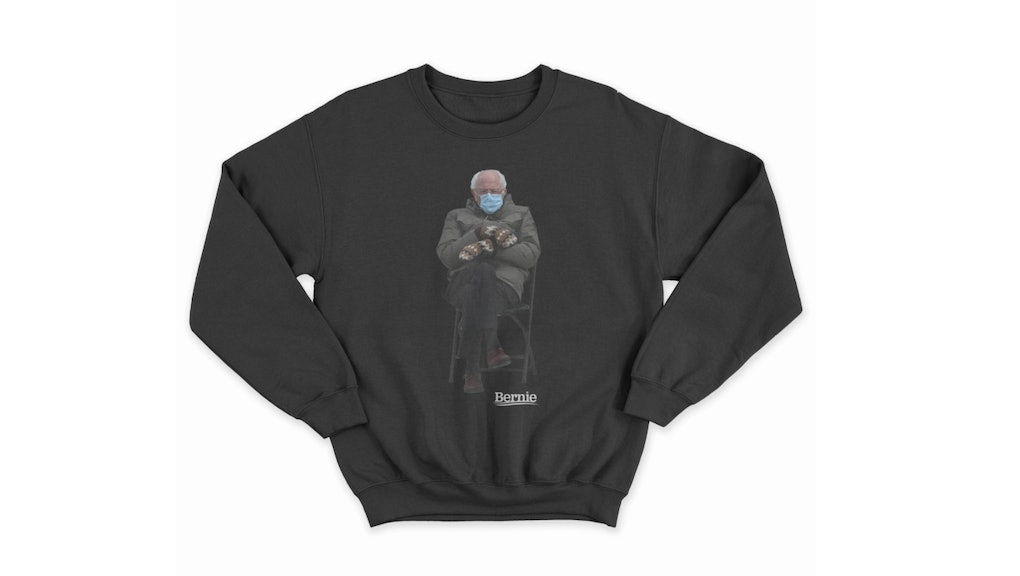 The Bernie meme is a sweatshirt now

The defining image from Joe Biden’s inauguration certainly didn’t involve the new president, Vice President Kamala Harris, or anyone else in their administration. It was primary rival and newly minted Senate Budget Chairman Bernie Sanders, slouched and bundled up on a folding chair, with legs and mittens crossed. The image was quickly meme'd to oblivion — resulting in dizzyingly stupid backlash — and led to a massive surge in interest for Sanders’s mitten maker. You might not be able to get a pair of his mittens right now, but the senior senator from Vermont is now selling a sweatshirt with the image on his campaign website.

The black long-sleeve, dubbed “Chairman Sanders Crewneck,” features the Bernie chair meme just above a tiny campaign logo. All proceeds will benefit Meals on Wheels Vermont, and the site notes it may take between 3–6 weeks for the sweatshirts to ship due to “overwhelming demand.”

Sanders sat down with Seth Meyers on Thursday night to talk about the Biden inauguration, and above all else, the memes it spawned. While a few supreme weirdos have tried to project sexist, racist, or otherwise sinister motivation onto his posture, Sanders had the simplest explanation for Meyers. “I was just sitting there, trying to keep warm, trying to pay attention to what was going on,” he said, without disclosing what was in the manila envelope. Sometimes it’s just that easy — people like watching the man do things, when he’s the closest analog to how a regular person might react to all that pageantry in the cold.

He also doubled-back on credit for Jen Ellis, the Essex Junction, Vermont, schoolteacher who made his mittens in the meme. “The woman who made the mittens... is a very, very nice person and she’s been somewhat overwhelmed by the attention that is being shown to her mittens,” Sanders said. By Wednesday evening, Ellis told Jewish Insider she’d received upwards of 6,000 emails inquiring about her mittens, but she doesn’t have anything in stock at this time.

So maybe the crewneck — or the dozens of unofficial merch options — can be a consolation prize for the thousands who want Sanders’s mittens, or at least an excuse to prolong the year’s first well-worn meme.

More like this
Trump is having his best week since leaving the White House
By Rafi Schwartz
Why is Facebook this confused over letting Donald Trump back?
By Rafi Schwartz
How “stoopers” turned New York City sidewalks into trendy, sustainable thrift shops
By Jasmine Vojdani
Stay up to date