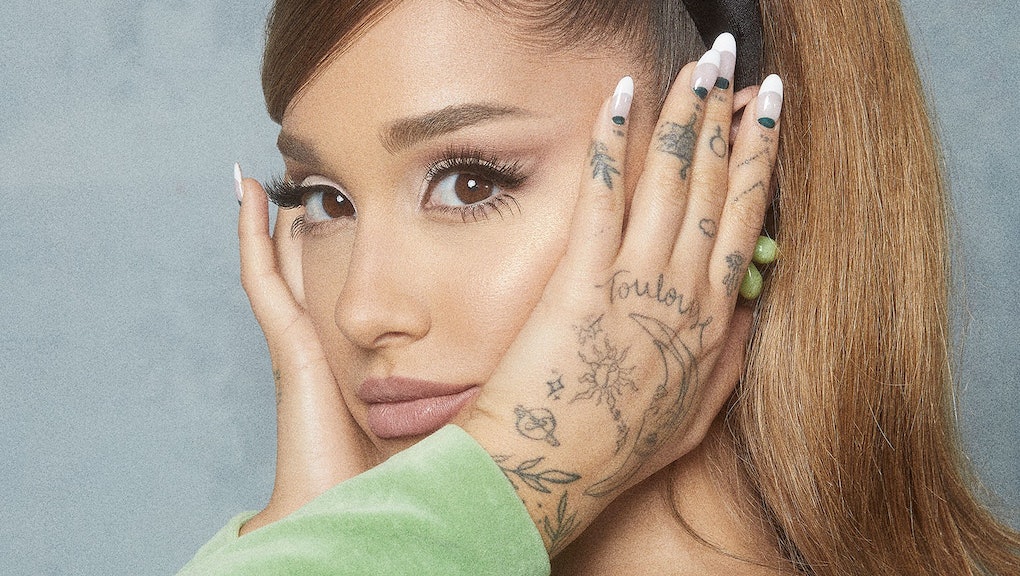 The best albums of the week, from Ariana Grande, Oneohtrix Point Never, and more

There’s something to be said for a guy who started the year in a Masked Singer costume and wound up at a President Trump event in Miami. While I won’t parse what led Lil Wayne into either scenario — I’d suspect there’s a similar impulse behind both, and Trump’s status as a totemic figure for rich guy excess in rap — he’s an ideal avatar for just how baffling everything about this year has been. The Trump campaign’s final message to voters is certainly a muddled one, relying on rallys in the face of record COVID-19 cases, recruiting Aughts hip-hop endorsements, and a confusing Hunter Biden conspiracy. No matter how lopsided the polls look, nobody knows how this thing will shake out. So as you breathlessly wait for some sort of resolution over the next few days or weeks, check out the week’s best albums, from Ariana Grande, Oneohtrix Point Never, and more.

She’s talking about the Billboard charts, right? Ohhh, I think I get it now. Once you plug the second track’s title into your calculator and listen to Ariana Grande’s all-nighter plans, Positions reveals itself as a debilitatingly horny effort. And frankly, she’s earned it: after the cathartic, emotionally taxing one-two punch of Sweetener and thank u, next, Ariana reserves the right to get cozy in lockdown with her hotshot realtor boyfriend. Where those albums contained boundless possibilities and conflicting impulses, she sounds quite a bit more content here with swooping strings and R&B production that can often settle into stasis. Even if Positions isn’t quite revelatory as those last two at first glance — or even hitting the skyscraping highs of My Everything — she’s still one of the best appointment pop artists going.

One of the most memorable house shows I’ve attended was way rowdier than it had any right to be. After a bouncy college rap duo got the packed basement going, Sinai Vessel took the kegger over with the cathartic, searching emo of 2017’s Brokenlegged. It didn’t seem to matter if they knew the songs, these kids were moshing around and responding in a way that you don’t always see with this stuff. Although the latest from Caleb Cordes’ project has a few moments that would work in that context, it evades the immediacy and demands a bit more space to unravel. But don’t confuse Ground Aswim with a demanding or challenging listen, though — it’s just a record that leans harder on heartland warmth and twentysomething listlessness. You hear the hesitation in the mathier instrumental stutters and the stretching, patient runtimes, but every so often — like on the tail end of “A Must While So Near,” everything snaps into place for one of the band’s signature soaring refrains. Always a project that’s seemed years ahead of where its current release arrives into the world, Ground Aswim feels like Cordes reaching the place he’d been striving for all along.

My favorite Oneohtrix Point Never memory was buzzing out of the theater from Good Time, after hearing one of the most frenetic pairings of scorer and film. The second favorite is probably when a museum curator introduced his set as On-ee-ahh-trix Point Never. Anyway, dude’s come a long way from glitchier ambient days of Returnal, one of the best albums to fall asleep with. Daniel Lopatin’s latest, Magic Oneohtrix Point Never, is such an active presence, gliding between the various modes he’s added to his toolkit in a decade’s time. With the restless, boundary-slicing confidence he deploys jittery electronic, calming new age, and driving alt-rock of “I Don’t Love Me Anymore,” you get a taste of everything. Lopatin’s pal and fellow Uncut Gems alum The Weeknd also scored co-executive producer credit here, featuring on “No Nightmares.”

Either the world wasn’t ready for Salem, or they weren’t ready for it. Bursting onto the scene with a wave of buzz and what many have hailed as the worst performance in SXSW history, the Witch house group rested at the intersection of trance, Southern hip-hop, and blog buzz that could make or break an artist for life. Well, after a decade out of the industry, Salem returns as a duo with Fires in Heaven. Jack Donoghue and John Holland are back with the sort of unnerving, moody backdrops that fit right into the current pop landscape, either a serendipitous coincidence or the latest in a tough run. The duo recently sat down for a great profile with the New York Times, which spans their rocky time out of the spotlight, including some unpaid work on Kanye West’s masterful Yeezus.

The Goalie’s Anxiety At The Penalty Kick — Ways of Hearing

Oh no...where are you going! But yeah, I know that a certain type of music fan might recoil once the band name scales past five words. (In this case, they’d be wrong — it’s cool, and comes from an old Wim Wenders film.) Nevermind the superficials, this is an incredibly promising new Philly emo band, carrying the torch for stage-stuffers like The World Is… at the height of their powers. As this sort of thing goes, you’re dealing with a surplus of band members, instrumentation, numerous Types of Guy on the mic, and a fearless approach to swelling, dynamic indie rock.

Well, here’s one old guard rapper you’d never catch on a Trump advisory board. Ever fixated on the apocalypse and the end times, Busta Rhymes has perhaps never been better suited to a moment than the one ELE 2 arrives in. Releasing 22 years after its first installment, the rapid-fire wordsmith comes with an updated outlook on the disaster movie doom and gloom — doesn’t something like Armageddon seem so quaint? Anyway, he sounds revitalized as ever, with Chris Rock narrating the end times, and Kendrick Lamar, Mariah Carey, Mary J. Blige, and uhh...Louis Farrakhan on hand to feature.

More like this
Lil Nas X's 'baby registry' proves trolling can be done with heart
By Brandon Yu
It’s never been more clear that we need a Diddy and Jermaine Dupri VERZUZ
By Keith Nelson Jr.
The 8 best reality shows you're not watching, but should be
By Brandon Yu
Stay up to date