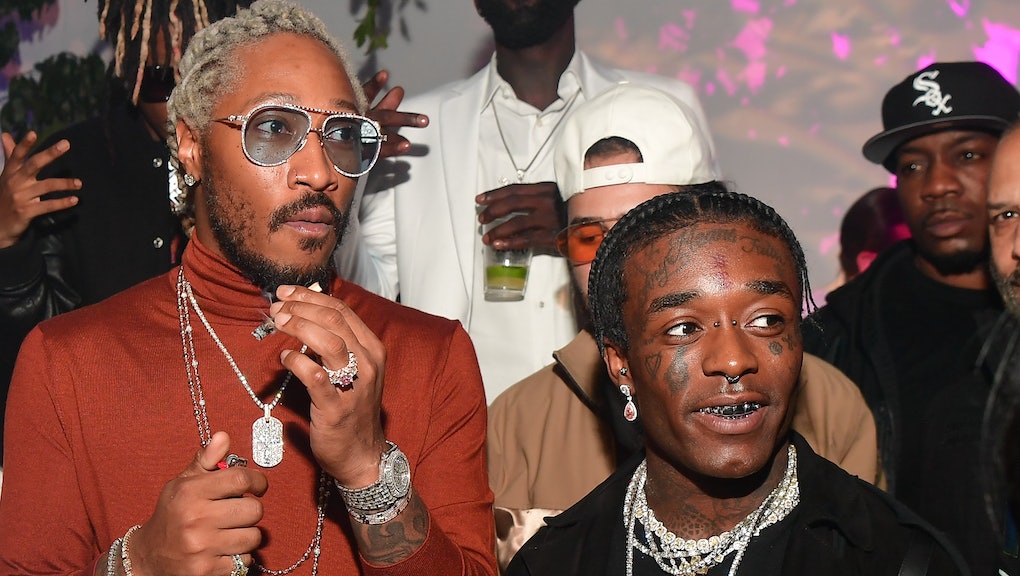 The best albums of the week, from Future and Lil Uzi Vert, 2 Chainz, and more

There’s always an arbitrary switch that flips earlier and earlier every year to determine when the holidays can begin. Before November, artists were already releasing Christmas albums. Last night, unrelated to the month or seasonal shifts, my girlfriend and I watched The Holiday — a movie in which Kate Winslet and Jack Black invent the concept of Christmas fettuccine? Soon after the credits rolled, Lil Nas X became a cyborg Santa in the music video for his new song “Holiday.” They’re here whether we like it or not!

In any case, with a few major albums left to close out the year — including Megan Thee Stallion, Miley Cyrus, adn Rico Nasty — expect things to slow down as we approach year-end list season. But for now, it’s another crowded week of new music, including records from Future and Lil Uzi Vert, 2 Chainz, Told Slant, and more.

Ignoring the actual baby Future, Uzi seizing the Baby Pluto mantle almost feels reductive at this point. After Eternal Atake, the guy’s more or less operating on his own plane free from imitation or outside influence. Future’s been involved in so many underwhelming marquee collab albums, from What a Time to Be Alive to Super Slimey, but Uzi’s at least a more invigorating presence and capable foil to the Atlanta rapper. If you come into something like Pluto x Baby Pluto with the right expectations — that is, a looser, lower-stakes sounding board for the pair to bounce ideas around — it’ll yield moments like “Real Baby Pluto” where their breathless flows truly lock in and hit the ground running.

An album called So Help Me God! taking forever to see the light of day...you don’t say! 2 Chainz has teased his latest record since this summer, but unlike Kanye’s promise of a record with the same name that never materialized, it’s finally here. His second gift this month, after calling Joe Biden and Kamala Harris different...and launching right into “I’m Different,” 2 Chainz further cements himself as a formidable album artist. He’s long outgrown the cheeky sidekick role, spinning world-weary autobiography with his last two records. 2 Chainz recently explained that his teenage album cover communicates a different sort of origin story than baby-faced classic rap artwork, but a track like “Save Me” drops you right into how the harrowing aftermath can linger into adulthood.

Felix Walworth’s records as Told Slant have always traded in gentle, enveloping warmth when confronting the hardest contours of being alive. Their warbling baritone gets propped up by light fingerpicking, soft piano and percussive touches, and guest vocalists who only emerge when the cathartic builds call for an extra hand. Point the Flashlight and Walk is mainly concerned with the challenges of devoting yourself completely to another person, and how frightening the aftermath can look when it eventually comes crumbling down. This is challenging thematic terrain to wade through, but Walworth lends a sturdy shoulder to lean on.

The Omaha, Nebraska guitar virtuoso has such a strong command of jammy ‘70s rock and roll reverence that it’s almost hard to believe. With a slightly intimidating Bandcamp catalog to sift through, Staunch Honey presents a ready-made entry point to get into the world of David Nance. With jangly psychedelia, buzzsaw lo-fi guitar solos, and the familiarity of reliable blues rock progressions, Nance has the right sense of when to let a song just kind of hum and throttle onto its natural endpoint. Be sure to stick around for “If the Truth Ever Shows Up” and all its rollicking fret work.

Amaarae — The Angel You Don’t Know

The debut record from Amaarae is a skittering, vibrant introduction. The Angel You Don’t Know finds the budding Ghanian-American star further dissolving the flimsy boundaries between Afropop and pulsing electropop that’s reigned stateside for the past decade. Her voice — porous and smooth enough to glide through any dancefloor — is both familiar and inimitable. You’re hard pressed to find a more deliriously suggestive opener than “I like it when you call me zaddy” on “FANCY,” which just sets the table for the effortless euphoria that follows.

Man, I don’t know what this guy’s on about half the time. Here’s Aesop Rock, in his own words, about Spirit World Field Guide: “If you are among the countless individuals who find themselves feeling both dead and alive at the same time, the information contained within may serve as an invaluable asset to your journey,” he says in the press release, adding that the album is “rife with hallucinatory images of killer eels, magic spells, and people on the run.” Alrighty then! Your guess is as good as mine, but the verbose, veteran MC remains one of our best technicians. In the past decade, he’s loosened up, grown more personal, and even dabbled in film scoring. Now, he’s further down the conceptual rabbit hole than ever before, compromising none of his virtuosity.