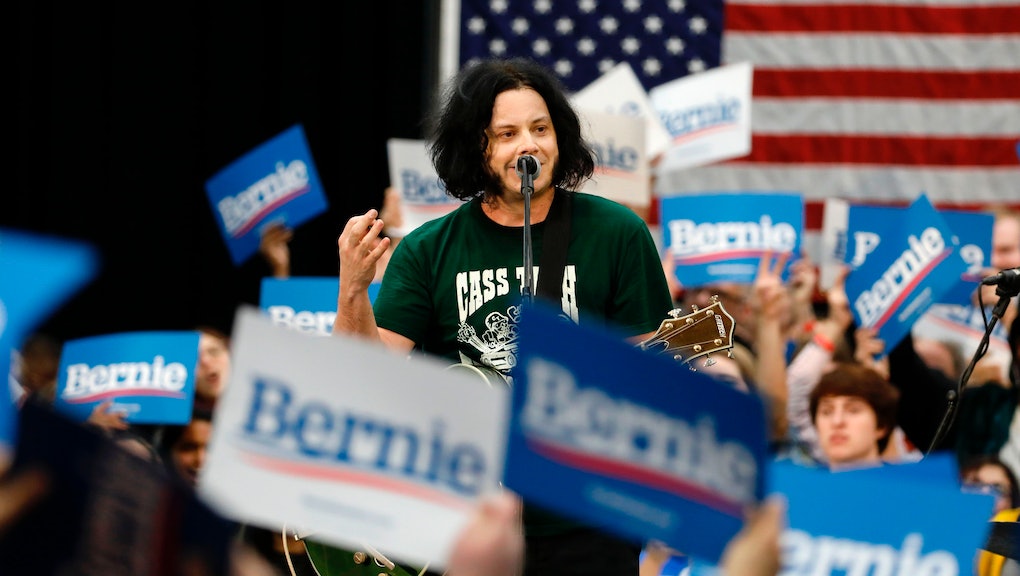 The buzziest indie rock tour of 2020 is shaping up to be the Democratic campaign trail. Recently, a number of bands beloved by people who were in college circa 2010 have thrown their weight behind Bernie Sanders, playing at his rallies in states with early primaries.

Today, The Strokes announced they’d be taking the stage with Sanders at a rally in New Hampshire on February 10. “We are honored to be associated with such a dedicated, diligent and trustworthy patriot — and fellow native New Yorker,” frontman Julian Casablancas said in a statement. “As the only truly non-corporate candidate, Bernie Sanders represents our only chance to overthrow corporate power and help return America to democracy. This is why we support him,” the band added.

A week ago, both Bon Iver and Vampire Weekend announced they’d be playing sets at Sanders rallies in Iowa just ahead of the state’s caucuses on Monday, February 3. Bon Iver will perform at the Horizon Events Center in Clive, Iowa, this Friday, with Vampire Weekend appearing in Cedar Rapids on Saturday, February 1. Glancing quickly at the Iowa weather forecast here’s hoping Ezra Koenig puts “Unbearably White” on his setlist.

Musicians have long been vocal Sanders supporters. Vampire Weekend appeared at several rallies when the senator was running for president in 2016. Many of the same stars who “felt the Bern” four years ago are back on board for the 2020 campaign — as are a lot of new supporters in the music industry.

Jack White played a Sanders rally at a high school in Detroit, Michigan, late last October. A few days later, two members of the band Dispatch, Brad Corrigan and Chad Stokes Urmston, performed at Sanders event in New Hampshire and voiced their support: "It's a real honor to be here" Stokes Urmston said. "We've been Bernie fans for a long time now and really admire his courage to say what he believes all these years.”

Democrats in Hollywood are using their influence to boost other candidates, too. Entertainers like Dave Chappelle and Donald Glover are part of the “Yang gang.” Charlamagne Tha God endorsed Mayor Pete Buttigieg, as did Ellen DeGeneres. And Elizabeth Warren has the likes of Queer Eye’s Jonathan Van Ness in her corner, as well as John Legend, who told Vanity Fair she’s "the best candidate running today."

But nobody has the enthusiasm of musicians behind them like Sanders, and it sounds like the love flows both ways: "One of the questions Bernie always asks before an event is do we have a band,” Sanders deputy campaign manager Ari Rabin-Havt told CNN.

“We try to have a musical event at every rally because that's something he really believes in. For Bernie, political events should be fun, should be cultural and should be entertaining. And it's not just about getting famous musicians to perform. We try to have local musicians of a variety of genres from rap to blue grass to reggae perform,” Rabin-Havt added.

According to the New York Times, the latest polling shows Sanders leading in Iowa, with about 25% of voters reporting he’s their first choice. Another poll conducted by the University of New Hampshire and CNN has the senator leading there by about the same margin. Biden, Buttigieg and Warren trail him in each state.

And no big surprise here, but Bernie’s especially popular among millennial and Gen Z voters. According to a new Quinnipiac poll, 53% of Democrats nationwide under the age of 35 are Sanders supporters. His sudden surge has centrists suddenly feeling really nervous about nominating a Social Democrat for president — though they’d be wise to pay attention to millennial voting preferences, since young voters were crucial to 2018’s “blue wave.”

This brings us back to the phenomenon of a bunch of bands touring in support of a septuagenarian politician. Initially, I wondered whether Sanders — beloved by those generations his junior; reviled by people his own age, who still equate socialism with communism — really needed the support of a bunch of indie bands. Weren’t their fans already on the Bernie bus?

But then I started thinking about the optics of massive turnout at Sanders rallies and Rock the Vote events in Iowa and New Hampshire. Young people really could propel him to the White House — and maybe even force establishment Democrats to take a Sanders presidency seriously. They're certainly spooked by the revolutionary energy: "The air buzzed with the intoxicating collective energy unique to social movements on the rise," New York Times opinion columnist Michelle Goldberg wrote of the vibe at a Sanders rally in Iowa last weekend featuring Portugal. The Man.

Whoever secures the nomination this summer will need the votes of young people to defeat Donald Trump in November. The Harvard Youth Poll found that voters under 30 are especially motivated, with 57% saying they will “definitely” show up at the polls on election day.

Bon Iver frontman Justin Vernon plans to tour Wisconsin in October 2020 in support of the Democratic nominee — though he hopes it’ll be Sanders. “I believe, unequivocally, that all people deserve support, love, and the freedom to choose how to live their own lives,” Vernon said in a statement. “There are promises in our constitutional language that are being superseded by money and greed in this country; I believe that Senator Sanders is the only one that has the pedigree, the experience, the courage, and the undying spirit to begin to put these obstacles of freedom to rest.”