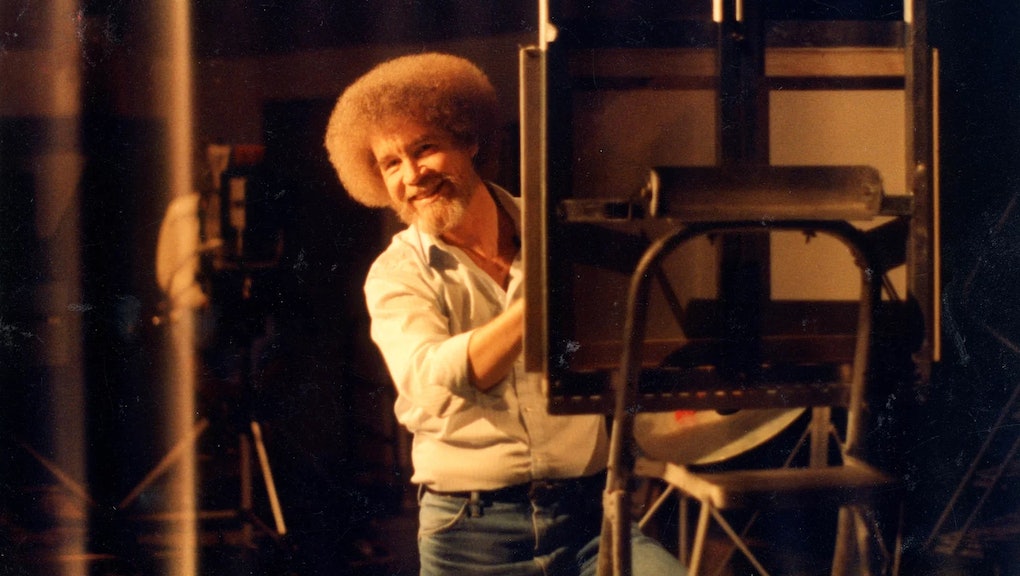 The Bob Ross documentary shows the dark side of happy accidents

It wouldn't be 2021 if the culture gods weren't arriving on horseback, clomping through the happy little forests of Bob Ross to muddy his legacy. At least that's what it felt like when the ominous anti-trailer for Netflix's Bob Ross: Happy Accidents, Betrayal and Greed came out a few weeks ago, just a quick flash of Bob at his canvas in black and white as the words "we want to show you the trailer...but we can't" flitter across the screen over an eerie soundtrack. Our collective stomachs groaned as we feared one of our few cultural icons of true purity and positivity might be ruined forever. What was revealed in the film itself, though, was perhaps more depressing: the truth that even our most precious cultural exports aren't safe from exploitation.

There are few people who conjure such happy feelings as Bob Ross. He passed away in 1995 from lymphoma, but decades later is still emblematic as a pioneer of self love and creative expression, his ASMR-ready voice reminding us, "The first step of accomplishing anything is to believe you can do it, and I know you can do it ... We can do anything in this life that we believe we can do." And yet despite such an iconic place in American contemporary cultural history, Ross's name, according to the documentary, was stolen from him, along with the rights to his empire.

While the documentary does add a little flair to the Ross we know and love, portraying him as somewhat of a PBS Casanova in the heady television art instructor scene (a portrayal ripe for a Christopher Guest script), his image comes out even more immortalized in goodness. The villains who come in to give credence to the sinister score are Annette and Walt Kowalski, who, according to the film, went from being Ross's early business partners, to greedy, maniacal money grabbers who would stop at nothing until they had everything.

Over a dozen individuals purportedly declined to participate in the making of the film because they feared legal retribution from the Kowalskis, whom the doc paints as incredibly litigious individuals in the pursuit of protecting the Bob Ross Inc. (BRI) empire that they now own. Steve Ross, Ross' son, is portrayed as having been completely cut out of his father's estate by the Kowalskis. Ross on his death bed apparently was trying to prevent that fate, refusing to sign any further legal documents with the Kowalskis, and leaving a will granting Steve 49% of his estate. He also married his nurse, Lynda, whom he had only known for a few months, as an attempt at a line of defense. Regardless, the Kowalskis were successful at their ultimate posthumous grab of everything by suing Lynda and Ross' brother Jimmi Cox in 1997, who owned the other 51% of the estate via Ross's will, and settled with the Kowlskis relinquishing ownership. Cox also declined to participate in the documentary "citing fear of being sued."

The Kowalskis are also shown as infringing on the kingdoms of other art instructors, by stealing their approaches and regurgitating them for their own shows or cornering them out of art supply markets. The Kowlaskis refused to participate in the documentary outside of a letter denying their relationship with Ross was "fractured at any point" and warning of legal action. BRI has reached out to publications who have reviewed the film as well, saying, "Bob Ross Inc. takes strong issue with the inaccurate and heavily slanted portrayal of our company in the Netflix film," and adding, "At no time did they pose specific questions to Bob Ross Inc. or ask for any form of rebuttal to specific assertions they had decided to include in the film."

While digesting what happened to America's minister of calm and high priest of happy little trees is difficult, it's important to recognize that we live in a society that wants to wildly consume art, but not value the artist. The Kowalskis might be the villains of Ross's story, but they are also a metaphor for the corporate greed that often bulldozes art. For every great new painter, there's a think tank wanting to turn their images into wall art for dorm rooms sold at Urban Outfitters. For every aspiring new chanteuse, there is a paywall at places like Spotify that make them trade exposure for fair royalties. The Bob Ross story is a reminder to read your contract three times, and then have a lawyer read it. Stories like these are the reasons why famous musicians tried to band together to make Tidal successful, and why a Banksy print self-destructed in front of an entire auction room after selling for $1.4 million. It's the reason why a banana was sold for $120,000 at Art Basel — they're all examples of challenges to the questions of who really owns art to begin with.

There is a thin line between the artist creating things to be consumed, and the consumer gorging on the artist as a product. Unfortunately for Steve Ross, the Kowalskies won. The wonderland of BobRoss.com is entirely owned by the Kowalskis, down to every coffee mug and waffle maker. But let what happened to Bob Ross be a reminder that art and artistry must be protected. We need stronger laws and fairer royalty structures; attempts at exploitation should not be such a given. Ultimately the documentary attempts to squeeze a drop of happiness into the ending, showing that Steve is still carrying on his father's legacy by teaching the joy of painting, and zeroing in on the happiness that Ross's show brought into people's homes. It's the silver linings kind of outlook Ross would probably want, but then again, he probably also would have wanted his kid to have the rights to his estate and likeness.

More like this
Alanis Morissette is really not happy with the 'Jagged' documentary
By Kara Weisenstein
Mariah Carey's 'Glitter' era deserved better
By Treye Green
The 8 best reality shows you're not watching, but should be
By Brandon Yu
Stay up to date