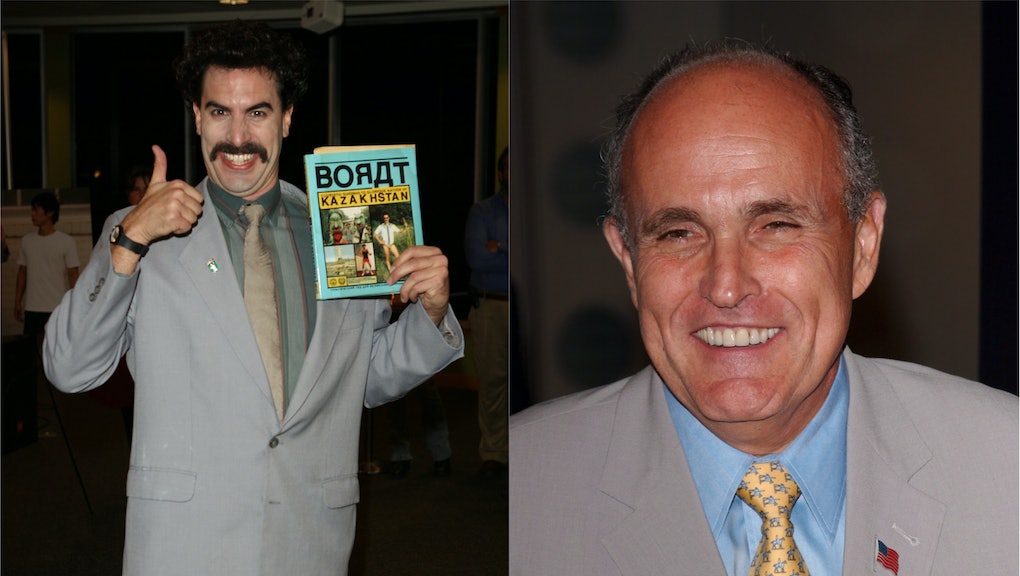 Back in July, Rudy Giuliani dished to Page Six about a run-in with Borat star Sacha Baron Cohen. As Giuliani told it, a young woman interviewed him in a hotel room for an earnest segment about President Trump’s response to COVID-19, before someone he presumed to be Cohen in disguise interrupted. While he described the general arc of this sequence, which appears in Borat Subsequent Moviefilm, Giuliani omitted one key detail. Soon after their segment, the interviewer — Borat’s daughter in the film, played by actor Maria Bakalova — brings Giuliani into the hotel bedroom, the pair flirt between sharp edits, he lies down on the bed, and runs his hand down his pants on camera.

After becoming a household name from the first film, Cohen’s Borat reprisal dons numerous disguises to get close to his subjects. Cohen, in character as Borat and in his second disguise of the segment, crashes the room before it goes any further. “This guy comes running in, wearing a crazy, what I would say was a pink transgender outfit,” Giuliani told Page Six at the time. “It was a pink bikini, with lace, underneath a translucent mesh top, it looked absurd. He had the beard, bare legs, and wasn’t what I would call distractingly attractive.”

Despite his ideation of a “transgender outfit,” this is mostly true. Before Giuliani and Bakalova’s character enter the other room, there’s light flirtation, and some jarring edits follow them into another bedroom. Giuliani asks for her number and address as they start to shuffle their clothes around. Then, Giuliani lies down on the bed and slides his hand down the front of his pants, with the camera clearly visible in the mirror above. At this point, Cohen storms in screaming, “She’s 15, she’s too old for you!”

In that same interview with Page Six, Giuliani claimed to be familiar enough with Cohen’s work to not be duped:

Giuliani explained, “I only later realized it must have been Sacha Baron Cohen. I thought about all the people he previously fooled and I felt good about myself because he didn’t get me.” A rep for Cohen declined to comment.

However, the former New York City mayor added, “I am a fan of some of his movies, ‘Borat’ in particular, because I’ve been to Kazakhstan. [Adopting a Borat accent, Guiliani repeats a famous line from the movie:] ‘She is my sister. She is number four prostitute in all of Kazakhstan.’ That was pretty funny.”

It’s been a week for national politicos and indecent behavior. On Monday, Vice reported that New Yorker reporter Jeffrey Toobin masturbated in front of colleagues on Zoom during an election simulation. Toobin has been suspended from the New Yorker, and CNN positioned his leave as voluntary. “Jeff Toobin has asked for some time off while he deals with a personal issue, which we have granted,” a CNN spokesperson told Vice.

However implausible that the former mayor known for butt-dialing reporters and accidentally uploading racist videos to YouTube would be in on the joke, we’ve reached out to representatives for Giuliani for comment, and will update this post if we hear back.