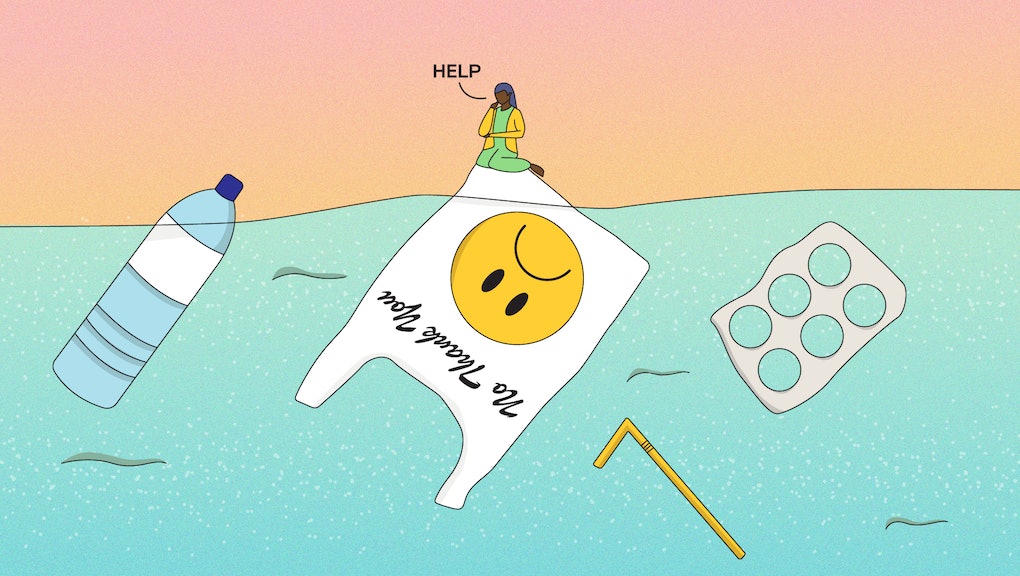 The connection between climate anxiety and white fragility

We've known that climate change is real for decades now. But for many people, particularly white people, it has felt like a threat that exists somewhere in the future but not quite right now. In recent years, though, that has started to change — particularly for the generation that will likely bear the worst effects of it. Gen Z is feeling an increased sense of existential dread, worried that they will inherit a planet that will become unlivable during their lifetime.

But while they might be dreading the future, people of color are living with the consequences right now. Marginalized communities and Indigenous people are on the frontlines of the climate crisis thanks to systemic racism. They have had their land stolen and exploited, deal with more pollution, are displaced by extreme weather at a higher rate, and receive far less support to build back their communities after disasters.

Sarah Ray, a professor of environmental studies at Humboldt State University and author of Field Guide to Climate Change: How to Keep Your Cool on a Warming Planet, has noticed a distinct trend in her classroom: that many of the students experiencing climate anxiety most viscerally are white. And that's to say nothing of most researchers studying the phenomenon. In a conversation with Mic, she explained where climate anxiety comes from, how it affects different communities, and what tools we have to address it. (This interview has been lightly edited and condensed for clarity.)

Mic: What sets the climate crisis apart that has young people feeling an ongoing existential anxiety?

Ray: There's something uniquely challenging about this moment. It's related to two things: One is that this generation is actually unique in their demographics. They are the largest generation that America has ever had. They are the most ethnically diverse generation that we've ever seen. They are the least economically well-off generation, and predictions around their economic well-being are worse than any generation before. It's the first time that it's expected people will not be better off than their parents.

They are also, depending on how much you believe the studies, the loneliest generation, and the most suicidal and the most depressed, most anxious. And, of course, that is something that professors can really tell you. Something has happened over the last 10 years. Students are really suffering. You feel like you're constantly walking people over to counseling and psychology in a state of urgent emergency, which didn't used to be the way it was.

If we believe the models and the [Intergovernmental Panel on Climate Change] and 99% of scientists, the prospects of what the planet is going to be like in the next 10, 20, 30 years is not looking good. That is their futures. They're wondering if this means that everything changes, will they get to do things like have jobs and have retirement and have children and do all their life-course things that seem to be the bedrock of what normalcy is in America. I think young people think that's all up to question. It's existentially jarring. What this generation is seeing is the threat of planetary collapse.

Mic: In Scientific American, you wrote about how climate anxiety seems to be a white phenomenon. When did you start to realize there was a different experience happening in different communities?

Sarah Ray: In [A Field Guide to Climate Anxiety], I described a story of a student who kind of melted down in the class one day, and he was a really privileged white guy. And he just sucked up all the oxygen in the room. He was really involved in research with me, but he had decided that it was all futile. And he just melted down, and he questioned everything we're doing.

I couldn't help but think of the students who were in that class who were first-generation students, Latino students, students thinking that college was their ticket to be both good in the world and also claim some upward mobility for their families. A lot of students who are first-generation are really just trying to get a step up from where they've come from. And I kept thinking that this was really insulting to them. His perspective was occupying the whole space, right? It was becoming the narrative.

I came to environmental studies from a social justice perspective. I thought, "This is a really interesting way to understand justice." But when I got to the field, I was surprised that it was so white. And then that became my question. It was the driving question that I wrote my first book [The Ecological Other: Environmental Exclusion in American Culture] about: Why, if the environment is such a critical way to understand social injustice, is the environmental field so white?

That's where the [Scientific American] article came from. This topic is obviously something that cuts across different communities. In fact, people who are most experiencing climate injustice are probably the most anxious and the most despairing and the most grieving. So why is the circle of people studying it so white?

I need to credit a student, a Latino student, who in a presentation mentioned something about how the white students in the class were grieving about the environment. She dismissed it as white fragility. And I remember thinking, "Holy cow!" The idea that people feeling terrible about the planet is a form of white fragility, that was just a real moment for me where I had to get out of my own white floaty head.

Mic: Does that mean feeling a sense of climate anxiety is born of privilege, in a way?

Sarah Ray: On a cynical day, that is what I think. But it's actually more complicated than that.

"Climate change is the most current layer on top of historical oppression."

But oftentimes, the dread or the existential sense of insecurity that those communities feel, they have been feeling in historically different frames for generations. Climate change is the most current layer on top of historical oppression. To call it climate anxiety can feel like an erasure of all of the historical trauma. To call it climate anxiety is to suggest that there hasn't been a long history of other forms of anxiety and grief and mourning that are related to things like colonialism or capitalism or slavery. And all of those things in our country put the same communities who are suffering most from climate change in these vulnerable positions in the first place.

So, those communities can feel climate anxiety. It is not just a privilege thing. However to call it climate anxiety can run the risk of erasing all of the other forms of historical oppression that cause existential dread in those other communities. And I think that's where the stickiness is.

Mic: The idea of climate anxiety can feel almost theoretical. But communities of color are on the frontlines and are already feeling the effects. Does that result in a different feeling — something other than anxiety?

Sarah Ray: That is a really important distinction. Climate psychologists do distinguish those things, so some of the language around it has to do with climate trauma, which means you're experiencing a climate event on the frontlines.

"If your present is secure, and you're worried about a future, then that is inherently a form of privilege."

The idea of anxiety is this sort of amorphous thing that doesn't attach to an object. That distinguishes anxiety from worry. Worry has an object: I'm worried about my bills, for example. Anxiety, by definition, is amorphous and doesn't necessarily have an object. So if you're not on the frontlines, having clear objects in front of you to worry about, then it is kind of a privileged thing to have this amorphous anxiety of some uncertain future. If your present is secure, and you're worried about a future, then that is inherently a form of privilege.

Mic: What can we learn from some of these communities that are already experiencing climate change?

Sarah Ray: The climate movement, which has been predominantly white, has not been thinking about existential tools because of their privilege. Environmental problems and climate problems have been thought about in terms of scientific or technological or even political fixes. People who operate in those realms haven't really been thinking about the fixes being cultural, or fixes being psychological. It's really only in the last five or six years or so that the climate movement has become more increasingly shaped by social justice movements. Now we have something called the climate justice movement.

The strategies around resilience come from a lot of different social movement traditions, and different communities that are bringing that to the climate movement. In the last chapter [of Field Guide to Climate Anxiety], I talked about the need to make sure that white people don't just appropriate those traditions for reinforcing their own power. While the justice tools have come to the climate movement, the solidarity has to go both ways, you know?

More like this
Another reason to legalize weed: It'll be better for the environment
By AJ Dellinger
Eco-friendly houseplants: Here's how to ensure your indoor plants are good for the planet
By AJ Dellinger
Greta Thunberg calls out G7 leaders for their frivolous and wasteful meeting on climate change
By AJ Dellinger
Stay up to date