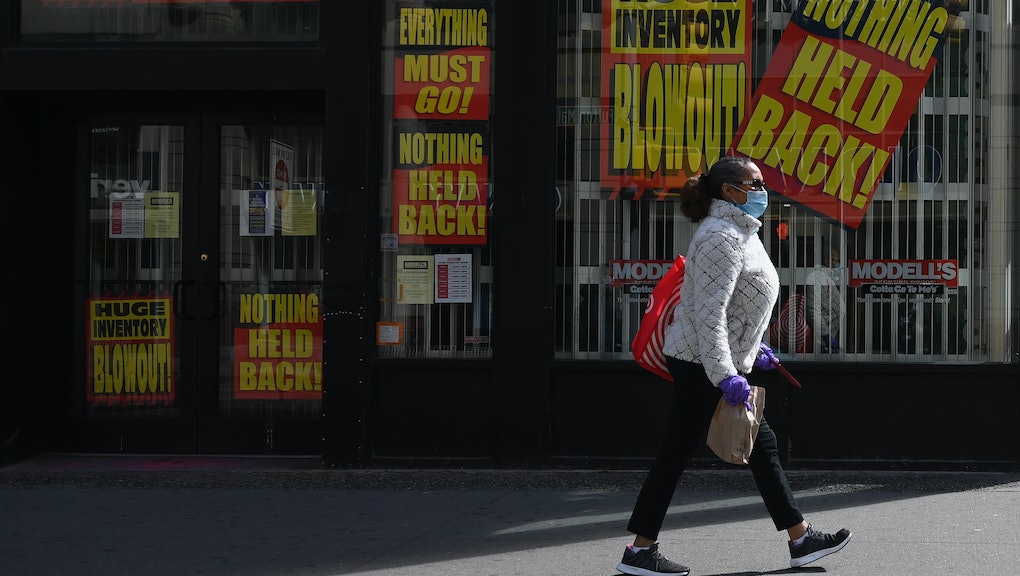 The coronavirus recession is already worse for Black Americans

As the COVID-19 pandemic worsened in April, many Americans were shocked by the extent that Black Americans were being disproportionately impacted: higher infection rates, more deaths and greater job loss.

But many Black Americans were not surprised. This is not new. The same dynamic has been going on at times of crisis for decades and generations.

As a labor economist and former chief economist at the U.S. Department of Labor under the Clinton administration, I know that history has shown that Black Americans consistently bear the brunt of recessions and natural disasters.

Prior to this pandemic, the worst economic downturns in post-World War II America were the 1981-82 recession and the Great Recession that followed the 2007-2008 financial crisis. During those downturns, the jobless rate of Black Americans peaked at 20.2% and 14.8% respectively, according to my calculations. From each downturn’s onset, it took 16 and 18 months to hit those levels.

Black Americans have higher likelihoods of losing their jobs because those jobs are concentrated in the hardest-hit sectors of the economy, such as hotels, restaurants, bars and other food services, and department stores.

Many who have kept their jobs face higher risks of infection because they work in “high touch” jobs such as transit workers and grocery clerks.

Further, because they tend to live in more densely populated communities, they also have a harder time practicing physical distancing.

This, along with the long-standing chronic health challenges of many Black Americans, puts them at greater risks of infection, illness and death.

Only when the public protested did they finally pass legislation that targeted additional resources to the neediest hospitals. It took until the second installment of the Paycheck Protection Program for many minority and women-owned businesses to get access to funds.

Black Americans also tend to have access to fewer resources, making it harder for them to be more resilient when faced with a challenge like a pandemic, recession or natural disaster.

This has been their experience during past economic recessions, but even during “normal” times, it is harder for Black Americans to compete on a level playing field.

Lower wealth and smaller savings form part of a patchwork of long-standing structural barriers that mean that in times of economic hardship, Black Americans tend to get hit hardest.

Fewer education opportunities, lower rates of work experience, discrimination in hiring and pay and having to live further away from where jobs are located all contribute to higher unemployment rates, lower earnings, greater part-time employment and more underemployment.

So too does the high rates of incarceration. Economists have found that when the incarcerated population is factored in, Black Americans are in no better an economic position than they were back in 1950.

As a result of these barriers to well-paying, sustainable jobs, the budgets of Black American families tend to be more vulnerable to economic shocks.

The figures also undercut pre-coronavirus claims by the Trump administration that in terms of jobs, Black Americans have never had it so good.

Although the headline unemployment rate suggests black Americans over the last three years have experienced their best economy ever, when carefully examined this is not true. My analysis of Bureau of Labor Statistics data shows that the share of black high school graduates that were employed just before the coronavirus crisis took hold is still well below its pre-Great Recession level. This is also true for black college graduates.

And it has taken over 10 years for the incomes of black Americans to return to its pre-Great Recession level. This all factors in to why the economic hit of the pandemic has been so hard for black Americans.

Under this comparison, the Trump economy looks less favorable for black Americans. Although the unemployment rate is lower, a comparison of the employment-population ratios — a measure that includes people not looking for work and is generally favored as a snapshot of labor market conditions — reveals that black Americans did better during the Clinton administration.

But when compared to past recessions, so too were many other Americans unprepared – even before the current crisis around 40% of American households could not pay an unexpected bill of US$400.

Globalization and technological change have weakened institutions such as unions. The Trump administration has undermined policies put in place to help create safe and fair workplaces.

Meanwhile, tax cuts that favor corporations and wealthy individuals and actions such as stock buybacks have further muted the impact of economic growth on Main Street.

The bottom line I see is that the U.S.‘s failure to maintain its investments in human priorities such as education, unemployment insurance, housing and community services, and health and recreation services, is threatening the ability of all Americans to bounce back from economic adversity.

So what next? As a member of the New Jersey commission advising the governor on how and when to reopen, I’m looking at immediate economic concerns. But a long-term federal plan will reach more people.

Instead of another rehash of what typically happens, I think many black Americans – along with many Americans of all backgrounds – want a new and different response to addressing racial inequality. Polling from before the current crisis found that a majority of people acknowledge that being black hurts a person’s chance of getting ahead.

Black Americans have historically borne the brunt of economic downturns, so they will need a disproportionate share of resources to create and sustain their resiliency, including policies that improve opportunity, lessen overall inequality and fight discrimination.

I suspect that many will say the country can’t afford that kind of investment. Past surveys have indicated a lack of general support for increased federal spending on needy Americans and it is not known if COVID-19 will have changed minds.

But I believe we can’t afford not to invest in better, sustainable communities. Failing to do so will condemn those left vulnerable – both black, and nonblack Americans alike — to suffer from future economic shocks.

This article was originally published on The Conversation by William M. Rodgers III. Read the original article here.

More like this
Should vaccinated people wear masks indoors?
By Peter Chin-Hong
Cybersickness is real. Here's how to prevent your screen from making you miserable
By Angelica Jasper
Could mindfulness make you more selfish?
By Michael J. Poulin
Stay up to date