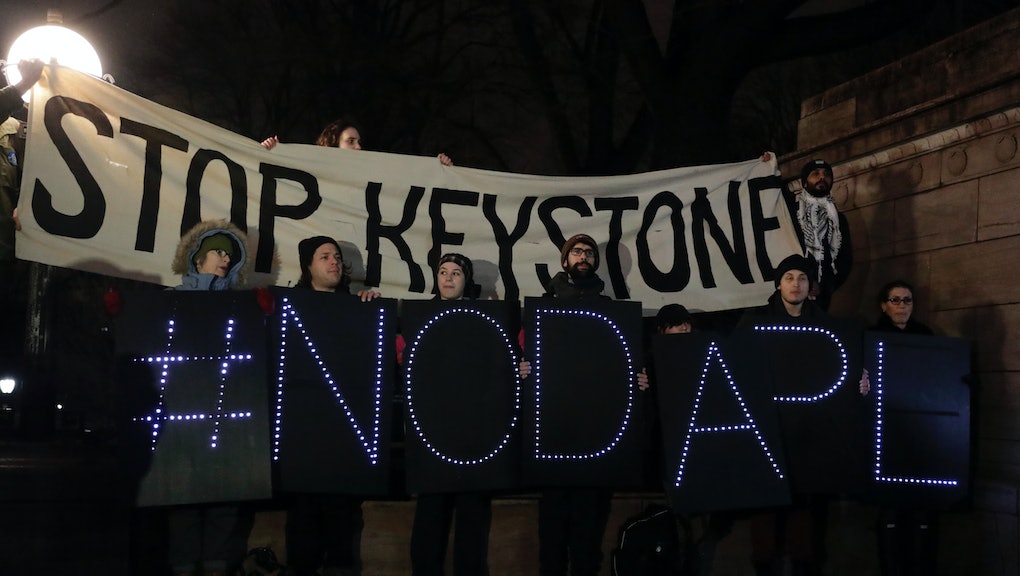 The Dakota Access pipeline has been ordered to shut down

The Dakota Access Pipeline (DAPL) must cease operations and be emptied of its oil in the next 30 days, a judge ruled Monday. In the U.S. District Court's ruling, the Judge found that the U.S. Army Corps of Engineers violated the law by publishing an environmental impact study of the pipeline that lacked scrutiny on the implications of a potential oil spill. The ruling demands that the owners of the pipeline halt oil transportation until a lawful and accurate study can be conducted.

The Standing Rock Sioux Tribe first filed a lawsuit against the federal Army Corps of Engineers in 2016, saying that the government violated multiple laws in its approval of the pipeline's construction. The violation of the National Environmental Policy Act (NEPA) means the owners do not have the authority to move crude oil through the a pipeline built below Lake Oahe. NEPA is a federal policy signed into law during the Nixon administration that says governmental agencies are required to "follow the process of analysis, documentation, disclosure, and consideration in decision making" as projects relate to environmental concerns.

In their initial court documents, the tribe argued, "The construction and operation of the pipeline, as authorized by the Corps, threatens the Tribe’s environmental and economic well-being, and would damage and destroy sites of great historic, religious, and cultural significance to the Tribe." The judge's ruling today agrees with this statement, and finds, "given the seriousness of the Corps’ NEPA error, the impossibility of a simple fix, the fact that Dakota Access did assume much of its economic risk knowingly, and the potential harm each day the pipeline operates, the Court is forced to conclude that the flow of oil must cease."

This ruling is a huge win for both the tribe as well as the broader environmental justice movement. Environmental activists and Indigenous water protectors have struggled to maintain their footing during president Trump's tenure in the White House. Though the Obama administration denied permitting for the pipeline after years of public pressure, the Trump administration reversed this order just days after Inauguration Day in 2017. Later that year, pipeline construction was completed. After four years of relaxed environmental guidelines for corporations, today's judgement clears a pathway for future lawsuits on behalf of tribal sovereignty.

The Standing Rock Sioux is a federally recognized tribe by the Department of the Interior and therefore beneficiaries of a government-to-government relationship with the U.S. federal government. Despite this legally binding relationship, the events leading up to Monday's judgement were not the first time U.S. authorities had attempted to supersede the autonomy of the tribe. In 1958, the U.S. Army Corps of Engineers stole 56,000 acres of sovereign tribal land for construction of a dam project.

But in the past four years, Indigenous water protectors garnered international attention for their efforts to halt the construction of the 1,168 crude oil pipeline because of the violence utilized by police and federal agents to disperse those standing in the way of construction. The tribe and environmental justice activists argued that the pipeline, which transports oil from North Dakota to Illinois, would spill oil into the waterways it traverses, including the Mississippi River, which millions rely on for municipal, farming, and home use.

Tribal lawyers and opponents of extractive operations have long said that oil spills are not an "if" but a "when." It's quite common for pipelines to leech oil into the ground and waterways, as crude oil breaks down pipelines as it moves through them. Crude-oil is also notoriously difficult to clean out of delicate ecosystems, which means that the impact of an oil spill can take decades, if not longer, to correct.

It's not clear what will happen in the long-term as a result of this ruling, or what the company is allowed to do after the 30-day stop on oil transportation. A spokeswoman for Energy Transfer said that the company plans to ask for an expedited appeal and a court order to halt Monday's ruling.

More like this
Biden's pledges aren't enough to avoid the worst effects of climate change, new study says
By AJ Dellinger
Eating meat is killing people, but not in the way you think
By AJ Dellinger
Chicago is releasing feral cats to deal with its rat problem
By AJ Dellinger
Stay up to date