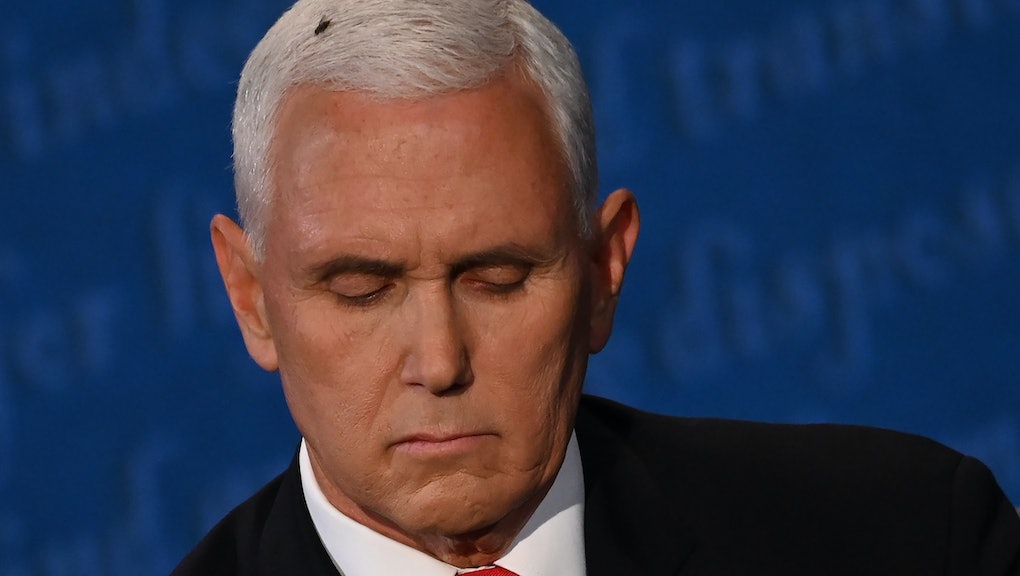 Last night’s vice presidential debate has already vanished from memory, but the sole enduring images — Vice President Mike Pence’s ostensibly pinkened eye, and the fly that rested on his head for a few minutes — might linger for a day or two. The debate fly became a meme on impact, spawning a fleeting moment of inspired posting that was quickly overshadowed by a dose of hollow parody grifting.

It was the sort of wacky moment that both the fiercely anti-Trump and fascist-adjacent could share a laugh over. Of course, there were the darker observations — flies tend to swarm around the dead and subhuman — and racist jokes — someone grafting the “he has one Black friend” trope onto...a bug? As always, there were the banal observations of the fly WINNING the debate, or speculation that Jeff Goldblum should play the debate fly on SNL because, haha. But it was briefly a pure space to get a few jokes off, somehow still continuing more than 12 hours after the debate wrapped:

But perhaps the worst of fly memes were reserved for the hundreds of parody accounts to surface in short order. The Pence fly accounts recalled another element of the 2016 experience, when stuff like Emo Kylo Ren or Donald Trump movie review accounts were all the rage. There’s no easier way to amass a large following on a microscopic moment in time, but it’s certainly not easy to stick out in a crowded field:

If one managed to, however, it was the account “Mike Pence’s Fly,” with a rainbow flag next to its name and a link to flywillvote.com in the bio. This is not-so-tacitly a brainchild of the Lincoln Project, home to the cabal of never-Trump conservatives getting out in front of their party’s rehabilitation project. Already a collaborator with FuckJerry, the notorious joke thieves responsible for Fyre Festival’s social media strategy, the Lincoln Project is the lamest possible venture, co-opting online teenspeak for the audience of boomer civility appreciators. The “Mike Pence’s Fly” account suddenly racked up an enormous following — currently sitting just over 109,000 followers — and follows just three accounts: The Lincoln Project, Lincoln Project comms director Keith Edwards, and Pence.

The same people who participated in the most notorious scam of a generation — and in the case of Edwards, a campaign for the Democratic Party’s racist billionaire primary candidate — get to just do this stuff infinitum. We’re doomed to this continuing no matter who wins in November, because it’s the easiest way for our least inspired and cruelest types to rebound into respectability.