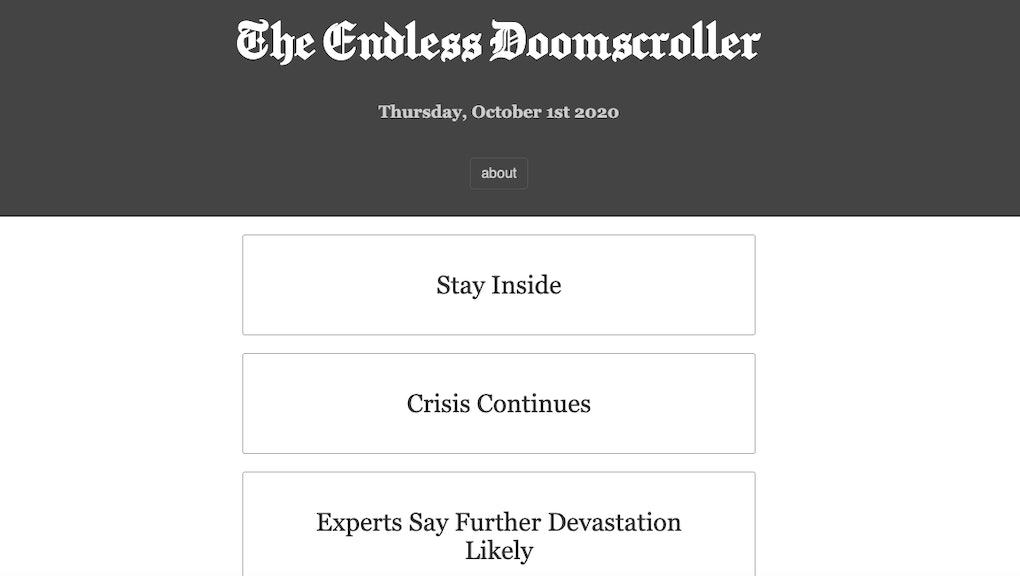 Via The Endless Doomscroller

'The Endless Doomscroller' is soothing my doomsday anxieties

Ben Grosser, artist and professor at the University of Illinois, has found himself doomscrolling a lot lately. The habit, which involves compulsively reading bad news, especially via headlines on social media, has seen a surge during the pandemic. And despite the fact that it’s widely considered to be bad for our mental health, Grosser and many others find it difficult to stop.

Grosser’s work typically focuses on “the cultural effects of software,” and the phenomenon of doomscrolling got him thinking about how the presentation of news and social media were combining to keep people scrolling. This realization inspired him to create the Endless Doomscroller, an art project that serves as a commentary on “designed-to-be-addictive social media interfaces.”

The Endless Doomscroller took Grosser a couple of weeks to complete. On the website, he describes it as “an opportunity for mindfulness about how we’re spending our time online and about who most benefits from our late night scroll sessions.” Pulling primarily from the Washington Post, New York Times, and articles posted to the coronavirus and politics subreddits, it cuts out any context, leaving behind only short, ominous warnings: “Solution Elusive,” “Global Crisis Continues,” “It’s Not Safe.” You can swipe forever but you can’t click through to anything. There are no images, metrics, or comments. Just bad headline after bad headline. And yet, somehow, unlike the guaranteed bad mood caused by regular doomscrolling, I find it soothing.

Grosser told me he’s never heard anyone describe it in exactly those terms before. Mainly, he says, it helps people realise exactly what they’ve been doing on other platforms, and just how unhelpful that behavior can be. The project has been popular, attracting praise for its accurate distillation of social media and how it critiques the news. And though some see it as a darkly humorous recreation, others have said they use the project instead of reading Facebook or Twitter. To that, he says, “at least it's a healthier alternative to these other platforms.” Gizmodo suggested similarly, or at least that it might show how an alternative, less addictive platform would look.

“Maybe the abstractions are a bit calming,” adds Grosser. “There’s a homogeneity to it that I think reveals that the news really isn’t changing all that much.” He emphasised that, of course, there is an incredible human cost to day-to-day statistics, particularly during the pandemic. But spending several hours reading them, particularly at the expense of sleep, doesn’t actually do anything to help.

By softening that genuine daily tragedy via abstraction, Grosser suggests that the Endless Doomscroller might even become similar to exposure therapy. “It’s a way of treating our doomscrolling afflictions by letting us have a substitute that isn’t full of all the content that’s going to take us away and down other rabbit holes,” he says. Professor Graham C.L. Davey, professor of psychology at the University of Sussex, agreed that this is a possible outcome. “Continually reading negative headlines is likely to habituate the response, giving a feeling of calmness,” he wrote in an email.

My best hypotheses are similar. As Grosser alluded to, the Endless Doomscroller strips away content that could lead to a spiral of reading increasingly worse things. On Twitter, for example, a tweet sharing bad news can be a portal to a wall of replies full of bigotry or coronavirus denialism. Grosser’s project at least takes away that additional stressor.

Similarly, the heavily abstracted headlines of the Endless Doomscroller are a reminder that any real headline is also an abstraction of its article’s contents. This can happen for any number of reasons, from wanting to increase engagement to the simple fact that summarizing necessarily leaves out details. This was something Dr. Davey emphasized as well. “Headlines, and especially negative headlines, don’t convey the context,” he wrote. “There are probably many reasons why the predicted negative events might NOT occur which are not included.” By serving as a reminder that doomscrolling doesn’t provide a full picture of the world, the Endless Doomscroller seems to erase some of the damage of its real(er) counterpart. Later, when seeing bad news online, it’s easier to challenge the snap assumptions caused by the headlines.

Grosser also pointed out that scrolling itself can be both a compulsive and soothing behavior. “It really feels like you’re in control of a physical thing. You push a little faster and it goes a little faster, you push a little slower and it goes a little slower. The satisfaction that comes from feeling control over the interface, I think provides a calming effect and because it’s suggestive of agency over the system.”

There’s this feeling that even if you’ve scrolled and read what you need to know, [what’s] just below the bottom of the screen might give me something more important than what I know now. - Ben Grosser

This dovetails with another of Dr. Davey’s observations: paradoxically, seeking out news can itself calm anxieties caused by uncertainty. “Most people have a desire to feel safe, so they access headlines and news soundbites in order to discover if they can still feel safe — even if doing so might cause them some distress.”

This is something that Grosser noted social media platforms use to their advantage to keep people engaged with their own scroll-based systems. “There’s this feeling that even if you’ve scrolled and read what you need to know, [what’s] just below the bottom of the screen might give me something more important than what I know now. And it’s because these things never end, there’s always more.”

Because of this, he explained, he worked hard to make the Endless Doomscroller never stutter, as Twitter might when it loads in the next chunk. Again, while his intention was predominantly critique, it also emphasises the meditative nature of the scroll. Dr. Daria J. Kuss, associate professor of psychology at Nottingham Trent University, thought similarly. “The Endless Doomscroller presents headlines very fast, making it difficult to read. Instead, people engaged with it are exposed to a constant stream of words, which may have a calming effect comparable to observing clouds passing by or watching the flow of a stream,” she explained.

Of course, watching clouds passing by or observing the flow of a stream would probably be altogether healthier activities for my brain. But the Endless Doomscroller provides a gateway to recognizing when actions get compulsive, how it’s influenced by social media algorithms and feeds, and how we might make kinder choices for ourselves. “Risk Continues” indeed, and “The Future is Uncertain,” but being aware of the world also means being aware of your own behavior, and which parts you might be better off without.

More like this
“Panny,” “panettone,” “panini”: Why silly pandemic nicknames are getting us through it
By Melissa Pandika
What is e-carceration? Understanding the U.S. justice system's dirty little secret
By Vanessa Taylor
Elon Musk's Neuralink made a device that lets a monkey play Pong with his thoughts
By AJ Dellinger
Stay up to date