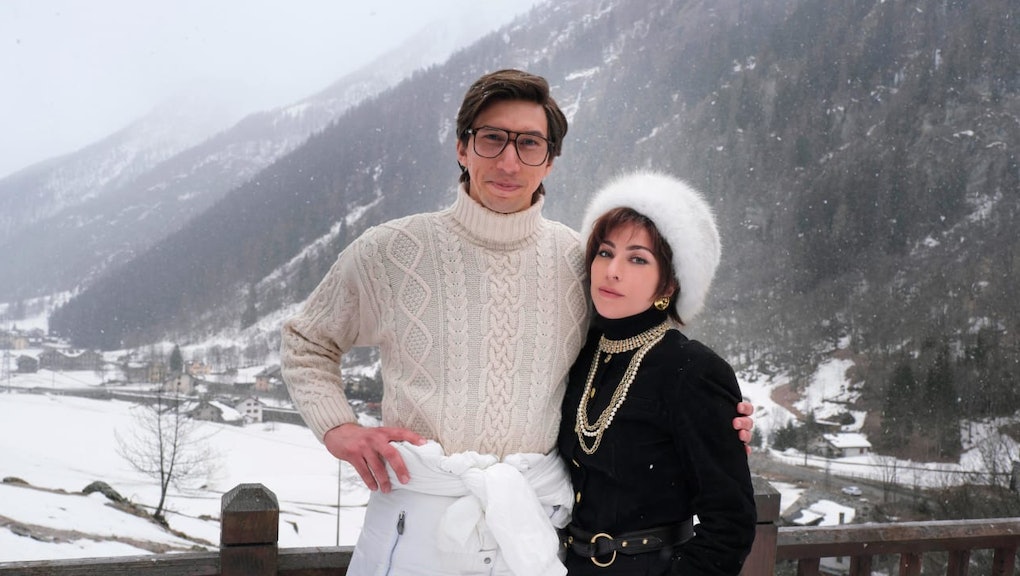 A portrait of Lady Gaga and Adam Driver in '80s Alpine cosplay has had the internet agog since late Tuesday. The cozy, glitzy image isn't a nostalgic campaign by Gucci the couturier, as I first assumed. It's actually a behind-the-scenes snap from the set of Ridley Scott's new film, House of Gucci.

Gaga is playing real-life Italian socialite Patrizia Reggiani. In 1998, she was convicted of plotting the murder of her ex-husband, fashion mogul Maurizio Gucci, who's being played by Driver in the film.

In 1985, after 12 years of marriage, Gucci left Reggiani for a younger woman. He told her he was going on a business trip and never came home. In March 1995, Gucci was shot and killed by a hitman hired by his ex-wife as he arrived at work.

Reggiani's subsequent trial was a media circus, and the press dubbed her the "Black Widow." She was sentenced to 29 years in prison and served 18 before being released early for good behavior in 2016.

Ridley's film is based on the book The House of Gucci: A Sensational Story of Murder, Madness, Glamour, and Greed by Sara Gay Forden and charts Reggiani's downfall. Lots of people are speculating that House of Gucci could nab Gaga another Oscar someday. (Somewhere, Bradley Cooper is shaking in his boots.)

Anyhow, the iconic photo of Gaga and Driver posing in their après-ski finest evoked a lot of feelings, prompting some pretty inspired tweets. Peruse the best of the bunch, below:

More like this
'Exterminate All the Brutes' is a messy, ambitious documentary that ties together genocide, white supremacy, colonialism ... and Josh Hartnett?
By Nicholas Russell
'The Nevers' will be so much better when Joss Whedon has nothing to do with it
By Kara Weisenstein
Queen Rihanna marched with the people against Asian hate this weekend
By Kara Weisenstein
Stay up to date