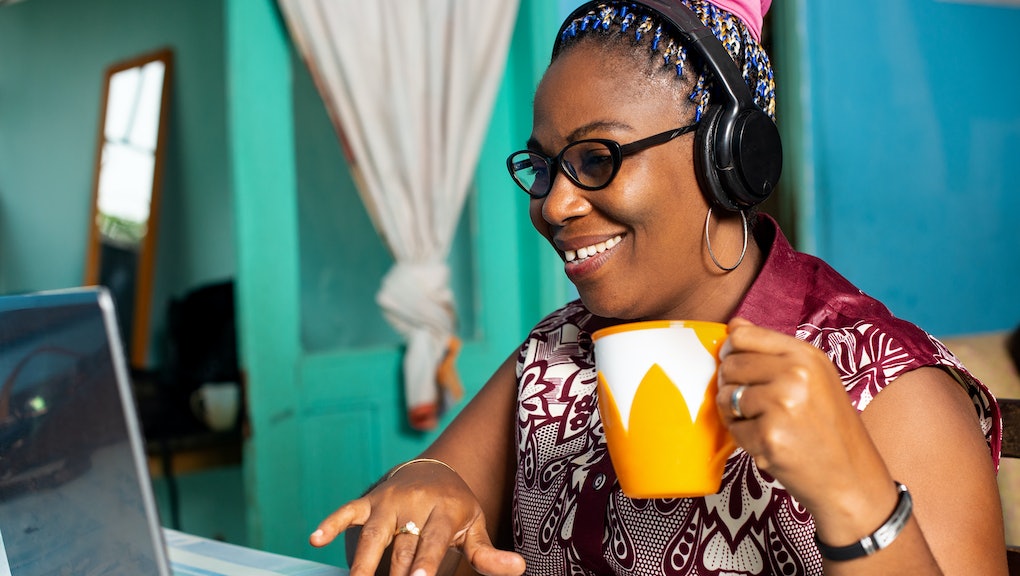 The essential quarantine playlist, according to people who always work from home

The coronavirus situation is escalating extremely quickly here in the US, and droves of workers are being sent home by their employers. Tons of city-dwellers who started the week commuting to an office woke up to a text from their boss this morning or last saying, “Yeahhh, maybe wfh for the rest of the week if you can. Thx!”

Setting up a functional and sustainable home office situ can be a real challenge if you’re not accustomed to it. You will not do your best work in the coming days, weeks, (gulp) months if you’re sprawled on the couch in darkness and silence subsisting on takeout as brain fuel.

I’ve worked remotely as a writer for more than a year now, and I absolutely love it. It suits me, skipping the whole commuting hassle and taking my dogs outside whenever I need sunshine and a breather. But optimizing my work-from-home setup took a certain amount of experimentation, and paramount among the elements that help induce a productive vibe is music. For me, at least, it’s hard to get into the groove without a killer soundscape.

Science backs up the theory that a good soundtrack boosts productivity. A classic study from 1994 found that listening to music during repetitive tasks helped people complete them more quickly, accurately and with less boredom. Scientists also say beat-driven music without lyrics and songs that are familiar are best for focus. Huh, that’d explain why my Spotify year-in-review was dominated by albums from 2015: Caribou’s Our Love and Jamie xx’s In Colour. It’s the gentle electronica I routinely turn to whilst hunched over my laptop on deadline.

Call me a stereotypical millennial, but I’ve recently gone analog with my “wfh” music preferences. I’ve been growing a modest record collection for the last year or so; I’ve got an $100 AudioTechnica turntable and some Harman Kardon speakers I scored on Craigslist. There’s something so pleasing about putting on a record and letting it spin while I hunker down and concentrate for 20-to-30 minutes before I’ll have to get up, stretch my legs, and flip it over.

“I vastly prefer working from home,” Los Angeles-based culture writer Nicole Clark told me, “because the prevalence of open plan offices makes focusing impossible for me.” She added it’s important to “not only take stock of what works for you, but why it works.” Her soundtrack of choice tends to be “wordless, atmospheric music” like Miyazaki film scores composed by Joe Hisaishi. Lena Raine is another favorite, “especially her Celeste soundtrack,” Clark said.

“I generally work in silence,” said Kim Kelly, a freelance writer and editor who’s the labor columnist at Teen Vogue and a contributor to lots of other publications, including Mic. “My block in South Philly is pretty quiet, and I do most of my writing late at night, so the lack of distractions makes it easier for me to concentrate,” she said.

When silence isn’t an option, like “at an airport or a coffee shop or something,” her go-to is “classic outlaw country music (your Waylons, your Lorettas, your Merles, and so on).” Kelly spent four years as Noisey’s heavy metal editor, but it’s not her work soundtrack of choice. “My beloved heavy metal remains my ‘thank god I just hit that deadline’ music!”

Naveen Kumar, a freelance writer and editor based in New York, said he streams KEXP, a Seattle-based indie radio station (that’s a personal favorite of mine too, actually). “I've been tuning in for most of my workday for several years, so the DJs are like my coworkers at this point,” he told me. “They play an incredible mix of music. [...] Think Soccer Mommy and Grimes meets David Bowie and The Clash.”

Krista Louise Smith, a Brooklyn-based painter who spends the bulk of her work time isolated in an art studio with her puppy (another big “wfh” perk), told me her soundtrack depends on what she’s doing. If it’s “grunt labor I listen to NPR,” she said, “just to update myself.” When she wants to capture a certain mood in her work, “I usually see how I am feeling, like do I need to channel sad girl vibes and play some Lana or Angel Olsen? Or do I need to rock out and do Zep or the Rolling Stones discography,” Smith said.

"Working from home is the perfect opportunity to blast all the music you'd be embarrassed to play at the office," said Grant Perdew, an animator based in Portland, Oregon. "For me, it's soundtracks. Most recently, Trent Reznor and Atticus Ross's Watchmen score and Ludwig Göransson's music from The Mandalorian."

That's another thing about "wfh" music that majorly rocks: playing it as loud as you want — on good speakers, if you have them. If you don’t have a quality sound system and are looking at an extended period of semi-isolation, I wholeheartedly recommend adding that to your coronavirus shopping list, actually. The expense is worth it after just one Donna Summer lip sync performed for your cat in your underwear, I promise.

More like this
Your burnout is about more than just your damn job
By Tracey Anne Duncan
The 8 best reality shows you're not watching, but should be
By Brandon Yu
Steve from 'Blue's Clues' gave us the closure we didn't know we needed
By Kara Weisenstein
Stay up to date