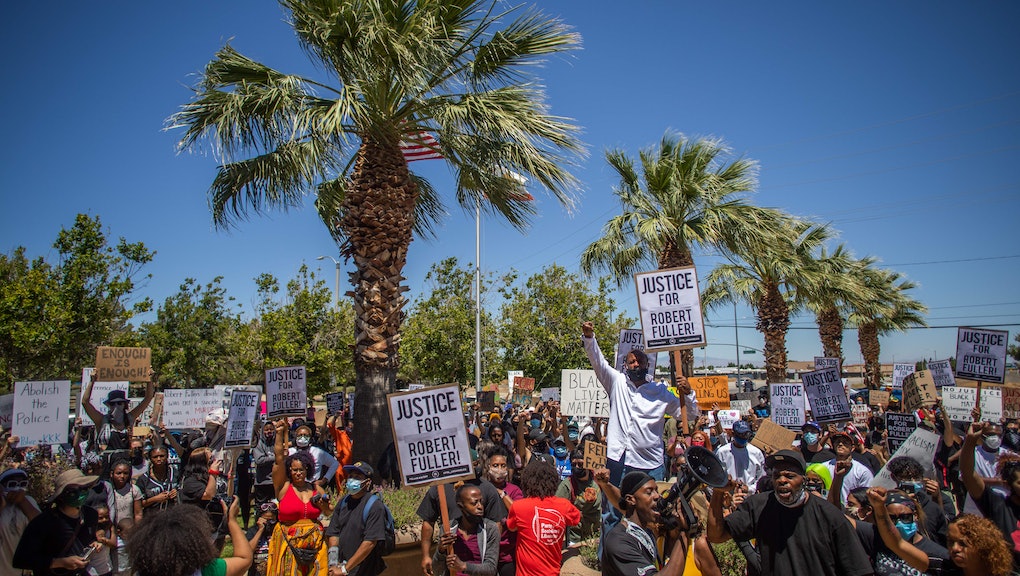 The families of two Black men whose bodies were found hanging from trees in California have denied authorities' claims that the deaths resulted from suicide. Now, after weeks of advocacy by family members, local authorities are launching an investigation into the deaths, which occurred within 10 days and 50 miles of each other.

A spokesperson from the San Bernardino Sheriff's Department said that officers responded to a report of a man who had been found hanging from a tree on May 31 in Victorville, California, which is about 80 miles east of Los Angeles. The man, later identified as Malcolm Harsch, was 38 years old.

"A death investigation is being conducted," spokesperson Jodi Miller told The Desert Sun, a local newspaper. "There were no indications at the scene that suggested foul play. The cause and manner of death are pending."

Harsch's family disagreed with the presumption that the cause of death was suicide and felt that the investigation was taking too long. "He didn't seem to be depressed to anyone who truly knew him," the family said in a statement. "Everyone who knew our brother was shocked to hear that he allegedly hung himself and don't believe it to be true as well as the people who were there when his body was discovered."

On June 10, just over a week after Harsch's body was found, another man, 24-year-old Robert Fuller, was found hanging from a tree in Palmdale, California, about 50 miles west of Victorville. Officials initially ruled that Fuller's cause of death was also suicide. "Robert Fuller was a young man in the prime of his life. His death obviously is painful for many people," Los Angeles County Sheriff Alex Villanueva said Monday during a press conference. "So my condolences to the Fuller family, and with this death investigation we'll hopefully answer all the questions and we'll get full closure to what happened here."

On Saturday, amid protests for Black trans lives and mounting calls for justice for Breonna Taylor, family and friends gathered in Palmdale seeking justice for Fuller, too. "We really want to find out the truth of what really happened," Fuller's sister, Diamond Alexander, said Saturday afternoon. "Robert was a good little brother to us, and it's like everything that [authorities] have been telling us has not been right."

The investigation launched by the Los Angeles Sheriff's Department into both men's deaths will be overseen by California Attorney General Xavier Becerra. "I take my commitment to transparency very seriously. As such, I want to thank [Becerra] for agreeing to monitor our investigation into the death of Robert Fuller," Villanueva said in a tweet. On Monday afternoon, Villanueva announced that the civil rights division of the Federal Bureau of Investigation will be looking into the deaths as well.

While the investigations are ongoing, authorities continue to call both men's death suicides. But some believe that the deaths were lynchings, especially in light of the history of KKK activity in the area as well as the current protests against white supremacy and police brutality taking place across the nation. One NAACP official called the February killing of Ahmaud Arbery, a Black man who went for a jog only to be chased down and shot by two white men, a "modern-day lynching."

Meanwhile, just last week, Kentucky Sen. Rand Paul (R) blocked the passage of legislation that would have made lynching a federal hate crime.

If you are in danger of acting on suicidal thoughts, or are seeking support and resources, call the National Suicide Prevention Lifeline at 1-800-273-8255 or text 741-741 for the Crisis Text Line. You are not alone.

More like this
Tennessee wants to fine schools millions for even hinting at critical race theory
By Rafi Schwartz
"This is how I'm gonna die": Capitol cops' testimonies highlighted the cowardice of the GOP
By Vanessa Taylor
Nancy Pelosi took a stand on the Jan. 6 committee, and it left Republicans whiny as hell
By Rafi Schwartz
Stay up to date