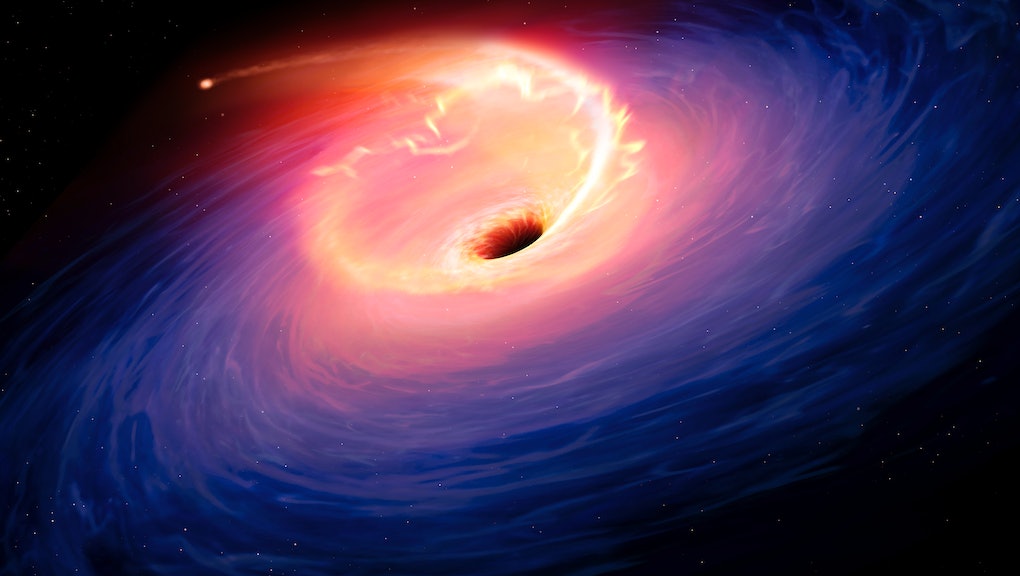 A study published yesterday in the Monthly Notices of the Royal Astronomical Society for the first time measured just how large the universe's fastest-growing black hole is. The hole itself, named J2157, was discovered in 2018 by astronomers with the Australian National University (ANU). Now, two years later, that same team has determined that the hole has a mass of about 34 billion times that of the Earth's sun, and eats mass nearly equal to our sun every single day. That makes J2157 nearly 8,000 times bigger than the black hole at the center of the Milky Way galaxy.

"If the Milky Way's black hole wanted to grow that fat," lead author Dr. Christopher Onken commented in a press release, "it would have to swallow two-thirds of all the stars in our galaxy."

The researchers had guessed that this black hole was huge when they first identified it two years ago. The amount of mass black holes consume generally depends on how big they are, so something that eats that much mass would have to be growing to an enormous size.

"We knew we were on to a very massive black hole when we realized its fast growth rate," said co-researcher Dr. Fuyan Bian. "[For] this one to be devouring matter at such a high rate, we thought it could become a new record holder. And now we know."

The astronomers estimated the mass of the black hole by relying on spectroscopic measurements, which provides data on the light emitted by the gasses surrounding the black hole. Black holes on their own are difficult enough to find due to their absolute darkness, let alone measure, so astronomers have to use the light-radiating gases to analyze and figure it out.

This black hole is sucking in so much mass and gas that it's creating a large amount of light that shines "thousands of times more brightly than an entire galaxy," ANU's Dr. Chris Wolf said in a release. "If we had this monster sitting at the center of our Milky Way galaxy, it would appear 10 times brighter than a full moon. It would appear as an incredibly bright pin-point star that would almost wash out all of the stars in the sky."

J2157 is such an absolute unit that, if it were in our galaxy, life on Earth wouldn't be possible. The sheer amount of x-ray radiation would have killed off any chance of life flourishing.

The rapid growth of the black hole brings more questions than answers for the scientists. "Is this galaxy one of the behemoths of the early Universe, or did the black hole just swallow up an extraordinary amount of its surroundings?" Dr. Onken wondered. "With such an enormous black hole, we're also excited to see what we can learn about the galaxy in which it's growing."