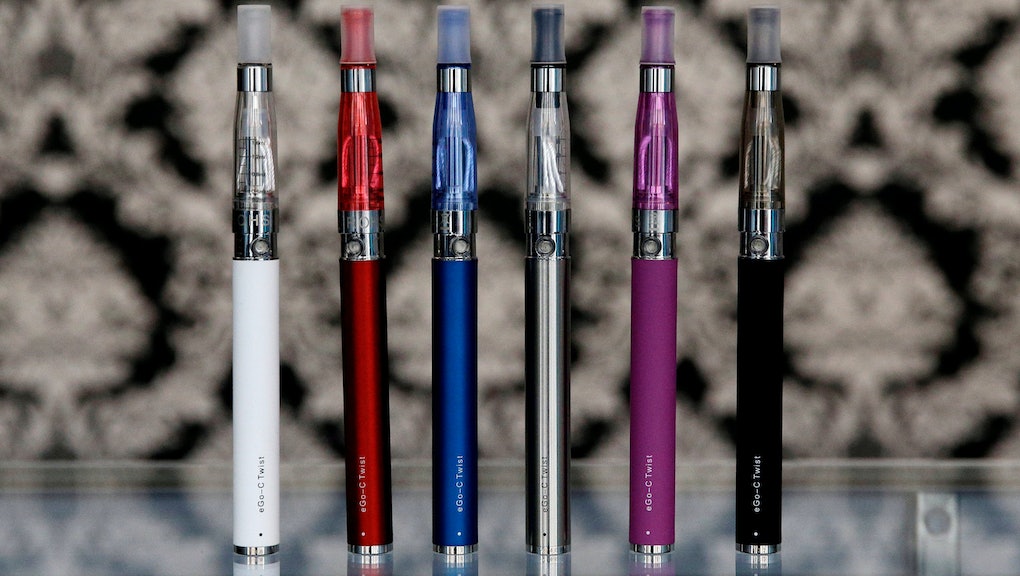 The FDA didn't regulate e-cigarettes for a decade. Here's why

As of October 8, nearly 1,300 cases of lung illness apparently linked to vaping had been reported to the Centers of Disease Control, leading to 26 confirmed deaths. Amid the outbreak, the Trump administration said in September that it would ban flavored vapes, widely blamed for ensnaring teens and young adults, whose vape use has skyrocketed — and who comprise the majority of those sickened. A judge has also ruled against a four-year extension set by FDA commissioner Scott Gottlieb for vape companies to prove their products carry more public health benefits than risks. In other words, FDA didn't regulate e-cigarettes for way too long, and now, the vape industry may be facing a crackdown.

Yet vapes first emerged in the US in 2007, according to a New York Times investigation; as lung disease cases continue to rise, these efforts to tighten restrictions on vape products feels like too little, too late. New York Times reporters point to a combination of vape and tobacco companies’ heavy mobilization against federal regulation, plus Gottlieb’s vested interest in the vape industry.

The Times traces the tug-of-war between the FDA and vaping industry to 2009. Although vape companies had marketed their products as smoking cessation aids, the FDA was skeptical. In 2009, the agency announced that vapes were illegal, unapproved drug-device combinations, stopped imports of them, and said they harbored noxious chemicals.

In response, vape companies sued the FDA and won. Under the 2010 ruling, the FDA had to regulate vapes not as drugs, but as tobacco products, which face more lax safety requirements.

Amid these court challenges, the FDA had trouble acting swiftly to impose broad regulations for vapes and other tobacco products. When the agency finally submitted its proposed rule for oversight of tobacco products to the Office of Management and Budget for final approval in 2015, the tobacco and vape industries fought intensely to loosen the regulations.

Indeed, nicotine and vape liquids both come from tobacco leaves, and many tobacco companies had made up for lost revenue from declines in smoking through vape products. Tobacco companies exploited their leverage as big donors to convince members of Congress to support pro-industry bills. By the time the proposed rule came back to the FDA, it included new regulations, such as prohibiting sales to teens, but the ban on flavors had been omitted.

President Trump’s appointment of Gottlieb as FDA commissioner in 2017 further snagged efforts to regulate vape products: Although he divested at the time of his appointment, Gottlieb had been a board member of the vaping lounge chain Kure, and he still believed vaping could help smokers quit. Not long after he assumed his new position, he gave vape companies a four-year extension to ensure compliance with the FDA’s new rules.

Although he divested at the time of his appointment, Gottlieb had been a board member of the vaping lounge chain Kure, and he still believed vaping could help smokers quit.

Meanwhile, vape use among teenagers had surged from 2.1 million in 2017 to 3.6 million in 2018, according to the CDC, prompting Gottlieb to begin lobbying the White House and lawmakers to tighten regulations on vape products.

Since then, the FDA has warned companies whose vapes seem to attract youth and has begun investigating whether Juul had illegally marketed its products to teens and adolescents. Last November, Juul halted sales of most of its flavors to retail shops. Not long after, the FDA said it would require retailers to prohibit teens from accessing vapes.

Further complicating efforts to identify the ingredients responsible for the apparently vape-related lung disease is that the FDA’s regulation of THC, the main inebriating compound in weed, remains a legal gray area, yet many of those who have fallen ill had puffed on vapes containing THC. Although cannabis remains illegal at the federal level, more than half of states have legalized medicinal use, and 11 states and Washington, D.C. have legalized recreational use.

More like this
A suicide safety plan saved my life. Here's what it looks like, and why it worked
By Kimberly Zapata
The benefits of liquid chlorophyll, explained
By Melissa Pandika
COVID-19 antiviral pills could be our reality by the end of this year
By Tracey Anne Duncan
Stay up to date