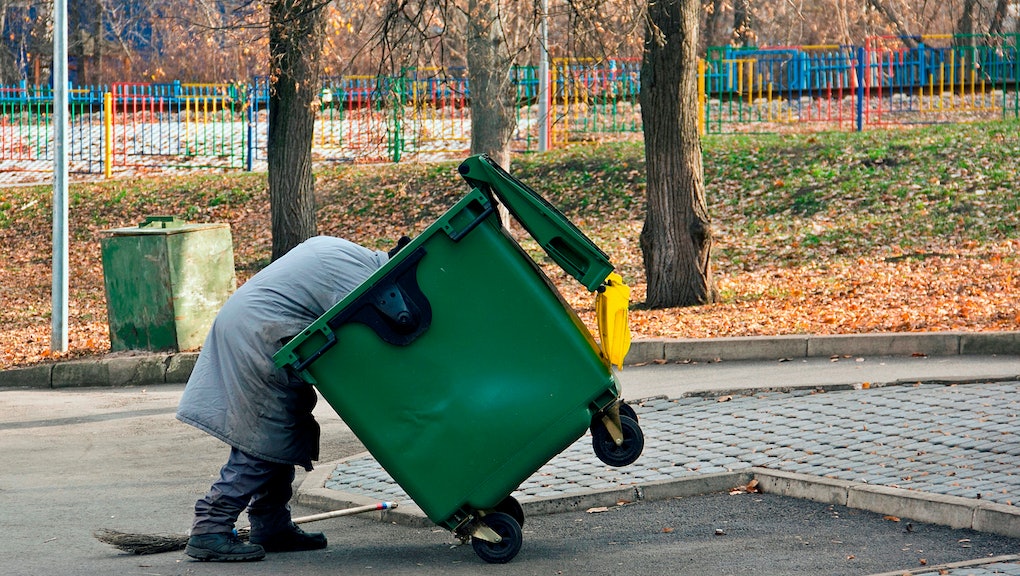 The futile, hypnotic quest of dumpster diving for gift cards

Once a month, 47-year-old Scott Lindsay visits his local GameStop with a stack of 15 to 20 gift cards. He hands the cards to a cashier, who patiently scans each to determine the remaining balance. These cards don't come from the usual suspects — they weren't lovingly tucked into a Christmas card by his grandma, or ceremoniously presented as a present from his co-workers.

Lindsay finds these cards in the trash.

Since November, Lindsay has been dumpster diving across his home city of Sacramento. At 7am every morning, the online seller will begin his hour-long route to a roster American chain stores. He goes from GameStop to Burlington Coat Factory, to Michaels, to buybuyBABY, to Ulta, to Bath & Body Works, among others. Every day, Lindsay looks for anything and everything in their dumpsters — strollers, clothes, home décor, games, expired ink — but at least twice a week, he’ll find a used gift card. He keeps the cards until he’s saved up a handful from each store before getting their balances checked.

“The Ulta girls definitely look at me weird when I come in with a stack of them,” Lindsay says. “They never say anything, but they look at you.” The awkwardness of the exchange is exacerbated because the majority of the cards Linsday finds are empty. “The most I think I’ve found is $1-something on a card,” he says, “It’s usually five, ten, 15 cents or whatever… You just never know — it’s like the lottery — you never know what you’re gonna find.”

Linsday is far from the only person partaking in the unusual hobby of “gift card dumpster diving”. On YouTube, divers share their finds with a surprisingly rapt their audience — a woman named Steph has accumulated 1.5 million views on a video where she shows off a haul of 300 gift cards.

Many of the cards Steph found were empty or otherwise unusable, but in total she found $126.14. Five out of the 136 Ulta cards she found had money on them, with balances ranging from 27 cents to $30. Though she found an Apple gift card with a $50 balance, buybuy BABY was less profitable — a handful of cards had 1 cent, 57 cents, 3 cents, 41 cents, and 2 cents each.

“It’s free money!” Steph exclaims in the video. “This money is gone now, it’s the store’s money that’s in the trash and the store just gets to keep it, so why not have somebody use it?” She encourages other divers to spend found gift cards without embarrassment, adding that a store’s staff “don’t know you found it in a dumpster”.

Unlike Lindsay, most gift card dumpster divers don’t go into stores to get card balances checked. Instead, after saving up a stack, many painstakingly type the numbers on the back of the cards into store websites. Another dumpster diving YouTuber, The Speedy Diver, tells me he has spent up to six hours at a time typing out card codes.

“Oh it’s boring, it’s really boring,” says The Speedy Diver, who isn’t prepared to disclose his name, age, or location. The Speedy Diver has found over 1,000 gift cards when dumpster diving, and has manually checked over 500 of them. Yet the largest amount he has found on one card is $20. What keeps him going?

The promise of “free money” not only keeps divers diving, but keeps YouTuber viewers hooked on their videos.

I’m hoping to find a girlfriend one day that will go with me.

Tom, a computer refurbisher in his early 20s from Texas, is one of the lucky dumpster divers who once found a gift card with a triple-figure balance. A year ago, while looking in a bin behind a shoe store, Tom came across a Target gift card. He checked the balance on his phone almost immediately and was shocked to find the card contained $100.

“It was nowhere near the closest Target so I assume it was dropped on the floor and ended up being swept up,” he says now. He has also found $93 on a gift card for a local car wash, and $30 on a GameStop card.

Like Lindsay, Tom doesn’t just look for gift cards but dives for anything valuable. He says he hits between 50 and 75 dumpsters a week and goes diving for half an hour on his lunch break every day. “I go alone because nobody in my family likes doing it,” he says, “I’m hoping to find a girlfriend one day that will go with me.” Tom explains that he finds between five and 15 cards every time he checks game stores’ dumpsters, but finds just five cards a week from other stores. “There are probably loads of cards [in game stores] because of the number of parents who don’t know what game their kid wants,” he muses.

Despite finding his $100 Target gift card, Tom admits that the risk/reward ratio of gift card dumpster diving can look pretty poor on paper. While he used to check 50 game cards at a time, the rise of captchas on websites has slowed down his process and he can now check less than ten a day. “To this day I have probably checked close to 2,000 game store cards and only gotten a grand total of like $50 from like 10 cards,” he says, before admitting, “it does seem kinda pointless now.”

Yet trash is a generous mistress, and a few years ago, Tom also found a magnetic card reader in a dumpster. After fiddling with the settings, Tom is now able to get the reader to type out the gift card number on his computer after he swipes a card. This speeds the process up considerably. “Smaller piles can be done in an hour or less,” he explains. “It can be boring, but I am always doing something else while I check like watching YouTube.”

Is gift card dumpster diving worth it? Tom says “98-99%” of the cards are empty, meaning you shouldn’t necessarily be encouraged by Steph’s success.

But after a lot of collecting, stacking, typing, and swiping, one man’s trash truly can be another man’s treasure. The Speedy Diver says that in the end it isn’t about the money but the joy of the hunt.

“Personally, I don’t think you can make a living off of it. There’s no way,” he says. “I think it’s more like a pastime, like a hobby if anything. If you enjoy it, it’s worth it.”