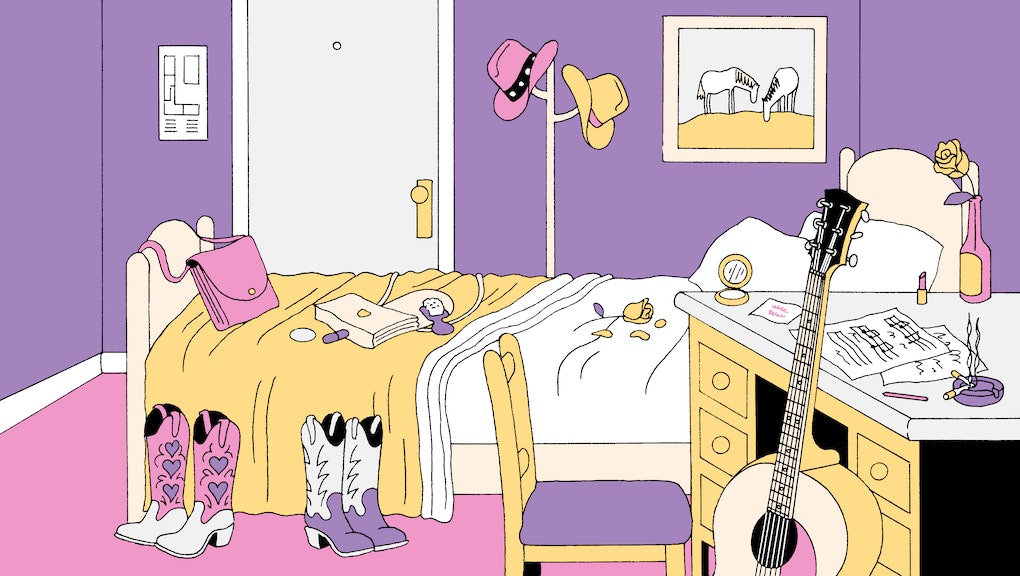 Dianne Davidson had a major Nashville record deal starting when she was a teenager in 1970. With her bellowing voice, gutting, emotive lyrics, and folksy sensibility, Davidson didn’t have a problem getting country music’s doors to open wide for her — at first. Her career took off soon after moving to the country music industry hub from West Tennessee at seventeen to make music. Her songs were heavy on the raw sincerity and the folk-acoustic instrumentals that were popular in the ‘70s, combined with a gut-wrenching drift that was all her own. It was only natural to her to be real about everything: the industry was rewarding it, it seemed. Davidson was getting radio play, interviews, and glowing reviews for the four years that followed her debut. But buried in track eight of her highly anticipated fourth album was “Song About Georgia.” It was about her first love, another woman.

“She was going on down to Columbus/I suppose to find her soul/And I yelled at her, but she didn’t hear,/‘Hey babe I still love you so.’”

That’s when everything came to a halt.

Davidson shopped her album around to all the major record labels after the label she was signed to went under, an incident that she didn’t expect to be a challenge because she was so in-demand. She quickly learned how wrong she was.

“People would say, ‘It’s an incredible album, it’s really genius, and I’m not touching it,’” she told Mic in a phone call. Although none of the label executives would give Davidson reason for not publishing it, she heard through multiple insiders that the song in question was precisely why.

After that, Davidson never got another major record deal. She performed in town and did odd jobs for a while before leaving country music altogether and moving to western New York to take a corporate job.

Davidson’s album was rejected in 1974, back when same-sex sexual activity was still illegal in Tennessee and in 42 other states. It was five years before the first national gay rights march even took place. A lot has changed throughout the country since then. But less has changed in country music. That is, at least, until right about now. The genre widely known to celebrate rural America, bask in traditional values, and speak to a largely conservative base, has been penned by dozens of gay songwriters for decades.

Many of them are finally ready to be open about that.

On a Saturday afternoon in June, the Frameline LGBTQ+ film festival at San Francisco’s historic Castro Theatre welcomed the premiere of the documentary Invisible, which chronicles the stories of lesbian songwriters behind country music. The women have spent their careers writing songs for stars including Barbara Mandrell, Johnny Cash, Charley Pride, Willie Nelson, Reba McEntire, Vince Gill, Tim McGraw, and Blake Shelton. Much of their work is searingly honest about love, loss, and the human condition — but with heterosexual storylines. The movie marks the first time most of these songwriters have spoken about the gay experience in country music.

Jess Leary, who penned the number one Billboard-charting country hit for Tim McGraw, “Where the Green Grass Grows,” (“I’m gonna live where the green grass grows/Watch my corn pop up in rows/Every night be tucked in close to you/Raise our kids where the good Lord’s blessed/Point our rockin’ chairs towards the West,”) said at a premiere afterparty that although she hopes her peers in country music see the film, she is somewhat nervous for them to do so. “I don’t want anyone to think I’m a liar,” she said. Yet she added that she doesn’t believe she would have been able to have the career that she had were she out as a lesbian in the 1990s when her songs took off.

This was echoed by other songwriters interviewed for the film: they had to make a choice between being in open and healthy relationships, or achieving their lifelong dreams of writing country music. Kye Fleming, like Leary, chose the latter and won over 42 BMI awards including Songwriter of the Year for three consecutive years. Fleming was first discovered by members of Elvis’s band. Her illustrious catalog includes the songs “Smoky Mountain Rain” and “I Wouldn’t Have Missed It For the World” by Ronnie Milsap, “She Used to Love Me A Lot” by Johnny Cash, and songs recorded by Willie Nelson and Tina Turner. But it all came at a cost. “After all these years, I am only beginning to understand the quiet compromises that impacted my personal life,” she said. “Ultimately, I have made sexuality something that’s easier to just deny altogether.”

Other writers didn’t. Shane McAnally and Brandy Clark both achieved commercial success while being out — although their first songs were recorded in the mid-2000s and their first hits came around the 2010s, while Leary started writing professionally in the early 1990s and Fleming in the late 1970s. Notably, McAnally and Clark co-wrote the hit single, “Follow Your Arrow” for and with Kacey Musgraves, which advises listeners to “Make lots of noise/Kiss lots of boys/Or kiss lots of girls if that’s something you’re into.” Many country radio programmers refused to play it. Lil Nas X came out as gay in 2019, six months after he released one of the best selling singles of all time, “Old Town Road.” Although the song sparked a heated industry debate over whether it should be considered country and Billboard removed it from its country chart, it was recognized by many fans as a country music song — and country icon Billy Ray Cyrus appears on the remix. Still, Lil Nas X chose to release his more recent song espousing his feelings for another man and boldly featuring gay themes, “Montero (Call Me By Your Name),” as a hip-hop song rather than as country rap.

Being out isn’t the entire battle for the songwriters. Bonnie J. Baker, who has written for Reba McEntire and Hunter Hayes, has been out as a lesbian since her early days in Nashville in the ‘90s. Her songs have been recorded abundantly in both country and pop. Still, Baker has experienced homophobia in country music, especially in terms of being silenced by her straight peers. Fellow writers and industry professionals would tell her throughout the 2000s, as Baker recounts it, “I just don’t want it in my face, but I’m okay that you’re gay,” or, “I’m not really prejudiced, but I just don’t want to talk about it.”

One day, when Baker told her publisher she would have to leave a writing session early for an appointment related to her and her partner’s forthcoming child, her publisher, according to Baker, held up her hand and said, “You know, I’m happy that you’re doing this but I don’t really need to know about it.” After that, Baker went silent. She felt like she couldn’t invite most of her co-writers to the baby shower. She refrained from talking about her child to people in the industry after they were born. “I lived openly as a gay person but becoming a parent just kind of was a bridge too far for some of them,” she said.

Baker’s experience being gay and having a gender-fluid child has nonetheless informed some of her writing, like “Invisible” by Hunter Hayes: “And you’ve been trying for so long/To find out where your place is/But in their narrow minds/There’s no room for anyone who dares to do something different.”

Baker believes that just this year there has been a “seismic shift” within the industry around gayness, which she pegs to T.J. Osborne of country duo The Brothers Osborne coming out publicly as gay in February and still retaining the support of the bulk of his audience. This move made Osborne, who alongside his brother has won five Academy of Country Music Awards and four Country Music Association awards, the most commercially successful openly gay country artist to date.

Baker says that since then she’s seen more conversations about LGBTQ inclusion within the industry than ever before. She notes that this shift also comes at a time when artist Mickey Guyton has just set the internet on fire with the hit “Black Like Me,” which discusses her challenges being black in country music, a club that includes a growing, but still disproportionately tiny roster of artists. “It’s all working at the same time,” she said.

Although there are many openly gay songwriters in country music, there are few openly gay songs. Baker and others interviewed for this story describe an ecosystem in which both country record labels and country radio executives are risk-averse, and each blame the other for the problem. “They have left so much money on the table in my mind because they just are so narrow in their view and vision of what music can be,” Baker said. She was talking about many things — the male-heavy gender imbalance they stoke, the number of songs they champion that lack well-worn tropes like dirt roads and trucks — but as far as the cash potential of gay country fans goes, the fan base is there.

Dale Geist runs the website Country Queer, which highlights emerging LGBTQ country artists and discusses news at the intersection of the two worlds. The site gets 14,000 visitors per month, according to Geist, and he says that number keeps growing. Some artists Geist has highlighted have been invited onto podcasts and radio shows and have been asked to open for more established touring acts — but none have gotten major record deals yet. “It’s not for a lack of talent,” he said. He thinks the hesitancy starts with country radio, which in turn affects the labels, who he describes as less homophobic these days but still commercially sensitive. “One of the things we do at Country Queer is demonstrate that there’s really an audience for queer country artists so that radio and major labels are less afraid to take a chance at exposing them,” he said.

On the social media front, the hashtag #countrygay has over 15 million views on TikTok. It features heaps of gay creators donning overalls and cowboy hats while lip-syncing and dancing to country music. The Instagram account @queerappalachia, which is run by a group of self-described “Fag Hillbillies,” “Swamp Divas,” and “Farm Femmes,” has attracted a staunch following for its posts about the intersections of queerness, advocacy, and American rural life.

Dianne Davidson is once again writing songs in Nashville, and she’s piecing together a living doing it. Last year, she was able to pull together tapes and files from her 1974 album that never saw the light of day and self-release it. She’s enjoying tending to a small but devoted fan base that couldn’t care less about her sexuality, some of whom were fans at the beginning of her career before losing access to her. A few of them send her money to help her out, telling her to “consider it royalties” on her blacklisted album. Back in the fold, she has some thoughts on today’s country music industry. “Better than it used to be? Oh, you bet,” she said. She would know. “But should it be farther along? Yeah, I think so.”

More like this
Alanis Morissette is really not happy with the 'Jagged' documentary
By Kara Weisenstein
Mariah Carey's 'Glitter' era deserved better
By Treye Green
Colin Kaepernick's new Netflix documentary highlights the man behind the icon
By Keith Nelson Jr.
Stay up to date