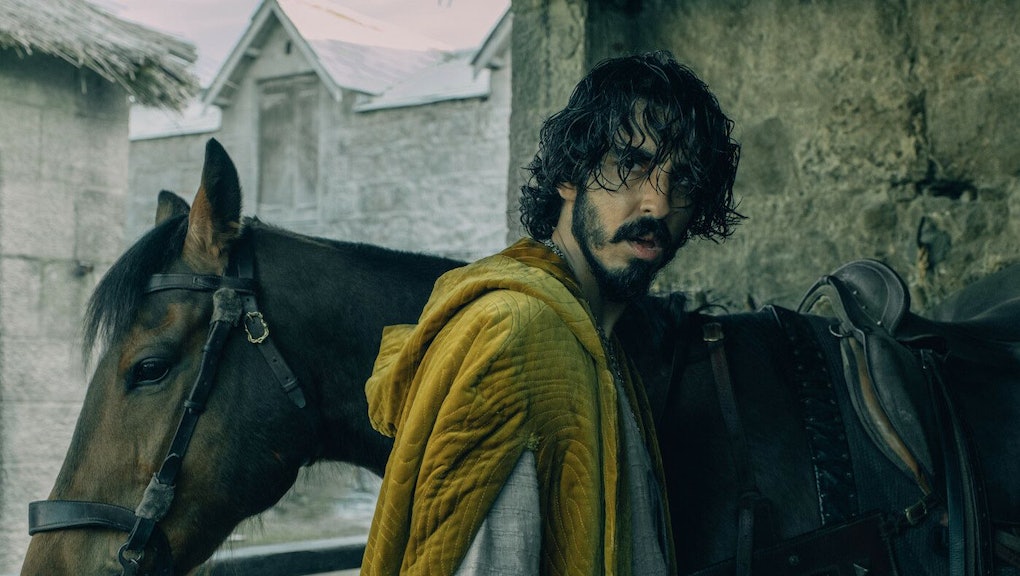 (This story contains slight spoilers for The Green Knight.)

It was early on in The Green Knight when I began to think, rather unexpectedly, of Simone Biles. Not long into the film, King Arthur (Sean Harris), the uncle of Sir Gawain, the wayward protagonist of David Lowery’s staggeringly audacious new work, wonders if it’s such a bad thing to want greatness for his nephew. Gawain (a stellar Dev Patel working at full capacity), at this point just a hard-partying young man shrugging off the expectations of his becoming a knight, does not believe he is destined for such a thing. More specifically, he seems to be afraid of what it takes to be great.

The notion of greatness and how it is built and perceived undergirds the mesmerizing, terrifyingly beautiful fever dream that is The Green Knight. It is one of the special things about Lowery’s approach: in taking on a canonical Arthurian legend, that of the tale of Sir Gawain and the Green Knight, it flips it on its head by concerning itself with the idea of its own myth-making. In an earlier scene, King Arthur asks his nephew to tell him a tale about himself, to which Gawain shamefully admits he has none to tell. To become a knight as part of King Arthur’s round table is to know you have to embark on the hero-making adventure if you are to have stories that will be rehearsed and told.

Gawain is quickly given the opportunity. Aided by the witchcraft of Gawain’s mother (Sarita Choudhury), the eponymous and mysterious green knight (Ralph Ineson) strides in on Christmas day and offers a challenge to anyone at the round table: land a free blow upon him, and next Christmas, the challenger must visit him at the Green Chapel six days north to receive a reciprocated blow. Gawain leaps at the challenge, finally able to prove his mettle, and beheads the knight.

Patel masterfully embodies a desperate, fumbling desire for courage, as the film tracks Gawain’s utter fear while he prepares to meet the knight again a year later. He seems both determined and ambivalent about earning his badge of honor, the virtue, he unconvincingly opines at one point, that dictates why a knight does what he does.

In this uncertainty and vulnerability — the opposite qualities of the prototypical noble knight — I thought of Biles. She was unimaginably brave in piercing the veil of her own mythos and revealing her humanity as someone whose physical and mental health were taking an insurmountable toil under the weight of expectation. She provided a sobering lens: what does a circular piece of metal, or a certain amount of spins and twirls, all really mean, outside of what we’ve invented around them and in the face of a person’s fundamental safety and well-being?

The Green Knight might ultimately land on the side of endorsing the notion of a knightly courage, but its most interesting parts are when it persistently interrogates the nature of man’s arbitrary ideas of greatness, honor and bravery. Late in the film, when Gawain finds himself at a castle toward the end of his journey, the Lady (Alicia Vikander, who also plays Gawain’s lover — a double casting that is one strand of the film’s delightfully unexplained mysteries and layered meanings) asks why the green knight is, in fact, green. In considering this, she unspools a contemptuous monologue about the silliness and smallness of men and their invented definitions of virtue, how the earth will grow over them and be here long after their games. (Not coincidentally, the Lady, who eventually seduces him and declares he is “no knight,” is the same face of his lover who earlier in the film asks Gawain why he must go on this quest to begin with; why he should bother with caring about a certain definition of how to be.)

It’s hard not to see the whole thing, and the very idea of the legends that burnish a hero, as an indictment of man’s ego. Lowery seems to know this: throughout his journey, Gawain traverses varied, awe-inspiring landscapes that dwarf him, and eventually he comes upon a set of literal giants that goes largely unexplained (it might be some mushrooms that he ate awhile earlier, even though the timing doesn’t really check out). Is this how we see ourselves, when we are in fact so much smaller? In reaching ambitiously for allegorical ideas around the folly of man, Lowery is also smart enough to create a film that is resolute in not providing answers to its many mysteries. The result is daring cinema. The end of the film is an ambitious, marvelous gamble that fast-forwards through the years and follows Gawain’s aging (Patel adeptly offers another dimension here to his talent) like an arc of man — through time and war, the making of a king and the fall of a kingdom — only to erase it all in instant.

It’s a treasure to simply see a film that is willing and allowed to go absolutely bonkers — alongside the unexplained giant men and disembodied heads that talk is also a talking fox, gorgeously surreal imagery and a fittingly operatic score — in a way that mirrors the gargantuan mythos and the infinite interpretations of a fable. (It also feels like a middle finger to the state of things in Hollywood — the film came out the same weekend of the new Disneyland-ride-turned-blockbuster Jungle Cruise and made on a fraction of a fraction of its budget, while infinitely more gorgeous and breathtaking.) Yet even in its extravagance, it's the archetypal questions that brought me to think most deeply and also somehow of Biles while watching it — that regardless of the stories they tell about you, self-conviction is what determines who you are.