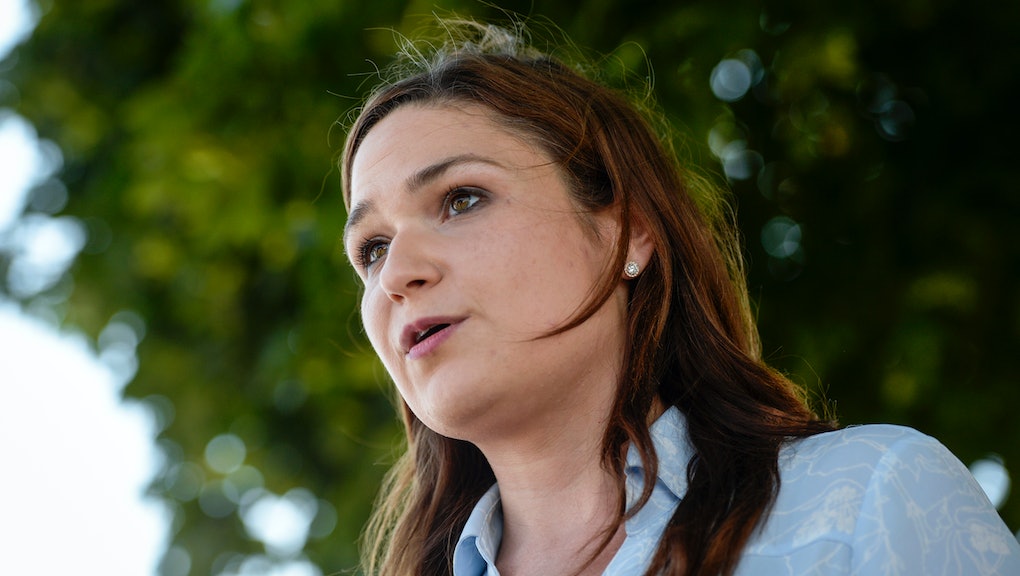 This year, millions of girls and women living in the United States will suffer from endometriosis, a painful condition caused by the lining of the uterus growing in other parts of the body. Endometriosis patients often may not even know why they're in pain, as the condition is so misunderstood and underfunded. It's a fight Rep. Abby Finkenauer (D-Iowa) is familiar with, which is why she introduced the House Endometriosis Caucus this spring. The bipartisan effort is designed to increase awareness of the condition, as well as boost funding for research on it — and on Thursday, it notched its first big win when the House approved Finkenauer's amendment to double the existing endometriosis research budget from $13 million to $26 million annually.

The House's vote comes five months after Finkenauer launched the House Endometriosis Caucus. The funding will increase the overall budget for the National Institute for Child Health and Human Development, which distributes research grants for endometriosis.

Since speaking of her pain on the House floor, Finkenauer tells Mic that scores of other women have shared their stories with her. She says she heard from women who dropped out of the workforce because of their endometriosis-related pain; women who suffered from infertility; women in their 70s, who, as young adults in their 20s, underwent hysterectomies. "That's who I thought about [Thursday] when we were passing this amendment," she says: "all of those women who have lost decades of their lives [to endometriosis]."

Despite the fact that endometriosis is widely experienced — estimates say it affects about 10% of American women — experts still don't really understand the condition. They don't fully know why the lining of the uterus migrates to other parts of the body or what a cure might be. Patients report that their family physicians and gynecologists, as a result of not knowing enough about endometriosis, have offered them incorrect information about the condition — or worse, have denied their pain altogether, leaving them with debilitating discomfort and no treatment, let alone a cure.

"There were moments as an 18-year-old, in that kind of pain, you do often wonder, what does your life look like if you aren't able to get treated?" Finkenauer says, reflecting on her early years dealing with endometriosis before she knew what it was. She says she wondered, "What will my life look like if I have pain like this so often?"

Increased funding will allow researchers to develop pain mitigation techniques and possibly uncover ways to mitigate the condition with less-invasive and non-surgical methods. (One of the more extreme treatments for endometriosis is to remove a patient's reproductive organs, which is why endometriosis is the leading cause of hysterectomy in women in their early 30s.) More federal research funding may also bolster projects to uncover answers as to why some people with periods suffer from endometriosis and others don't.

Doubling funding is an important step, but it's just also the first step, Finkenauer tells Mic. She says that it's critical that lawmakers "not lose sight of the fact that [endometriosis] is still one of the least-funded [medical] issues in the country." In particular, she wants the amendment's passage to send a message: that funding for women's health research is important. Next year, she'll be asking for more.

After all, she says: "We have a lot more work left to do."

More like this
The EACH Act would overturn a "blatantly racist" abortion rule. Will it pass?
By Clare Busch
FEMA said it would reimburse cities for housing homeless people. Most cities ignored the offer
By AJ Dellinger
Title IX will once again protect against gender identity discrimination
By Rafi Schwartz
Stay up to date