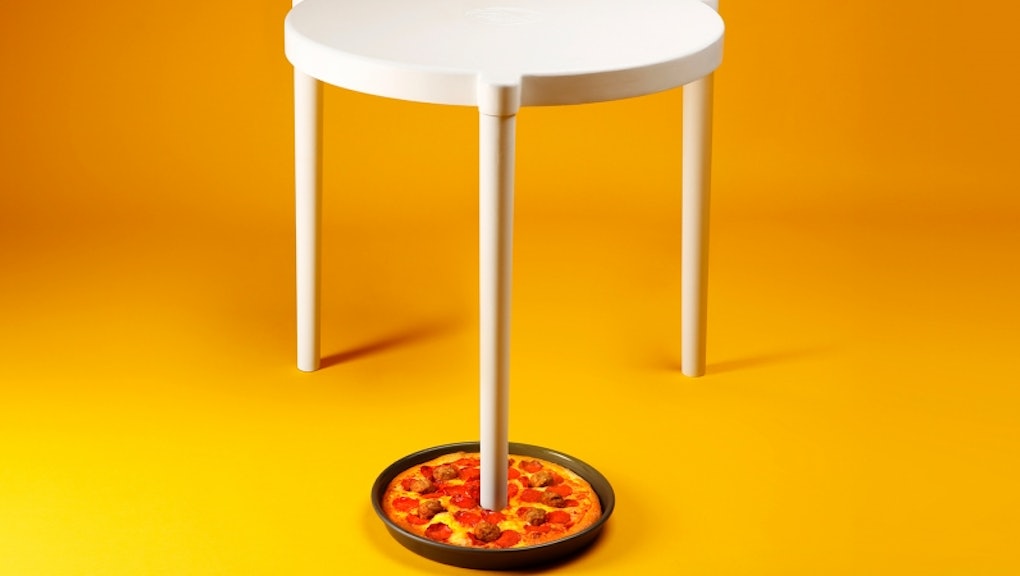 The Ikea Pizza Hut table is a revelation

It’s possible to have an unexplained affection for Pizza Hut and also believe that it isn’t entirely pizza. Perhaps better known for its hallucinogenic creations at this point, like the hot dog pizza, mozzarella poppers pizza, or the Doritos Crunchy Crust pizza, the brand is nothing if not committed to taking the biggest swings and whiffs. These bold choices are often temporary and oddly inspired, and their latest collaboration looks to be no exception.

The pizza empire’s Hong Kong division has partnered with Ikea to make the Säva table, which is a lifesize version of the tiny tables you’ll find in the middle of pizza boxes. It’s been launched through a partnership with the advertising agency Ogilvy Hong Kong, and has its eye on practicality as much as being another branding novelty product.

The Säva is just the right size for a large pizza box (although maybe not the enormous 24-inch Big Dipper pizza,) and even comes in its own life-size pizza box. No disrespect to Ikea, but many of their antiseptic minimalist coffee tables already kind of looked like the little pizza tables, so I’m not sure how much new design work this required.

According to Ogilvy, the table’s selling significantly faster than expected, with 67% more units sold than initially projected in the first three days, so it could be a matter of time before this migrates to other territories. That said, the one facet of the Ikea-Pizza Hut collaboration I’d like to see come stateside is the Swedish meatball pizza. Pizza Hut Hong Kong had been teasing the new creation with a photo showing a delivery driver, decked out in an end-times surgical mask, sleeping on an Ikea sofa in store.

It’s still probably a hefty endeavor to get those meatballs to stay on the pizza, but it at least looks to be less cumbersome than the Pizza Hut novelties with collapsing crusts. Much like how the Ikea cafeteria is strategically placed at the exact point in the store where you’ve begun to lose faith in yourself and humanity, the Swedish meatball pizza has arrived just in time.

More like this
Dua Lipa has officially distanced herself from DaBaby
By Kara Weisenstein
8 shows like 'Ted Lasso' to watch if you need more feel-good TV
By Brandon Yu
Why is Team USA still dressing like a bunch of preppy assholes?
By Chloe Stillwell
Stay up to date