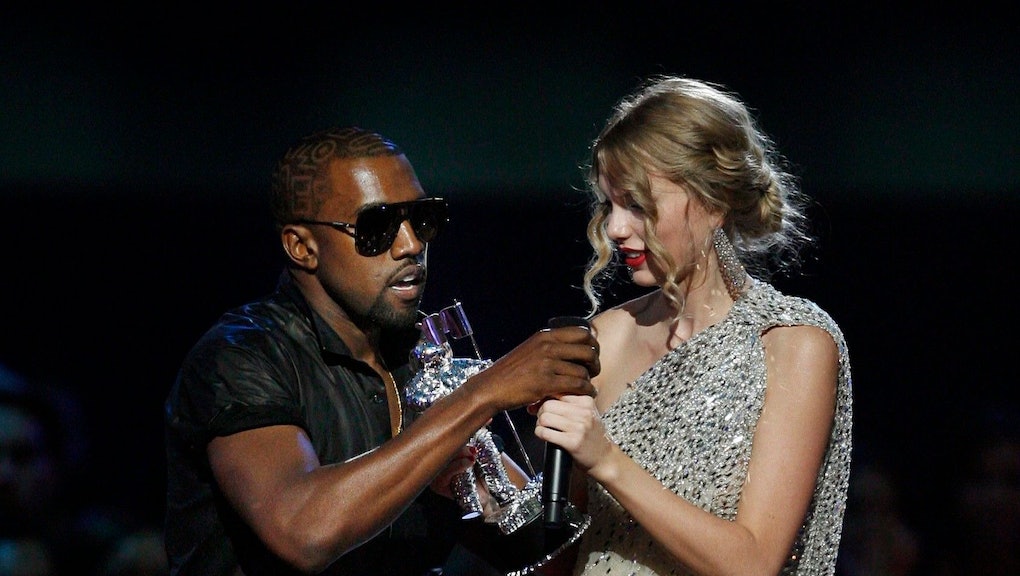 “I just remember thinking, This is not going to end well.”

Today Billboard published an expansive oral history of the MTV Video Music Awards’ infamous “Imma let you finish” debacle. Now, the particulars of the Tay/Ye drama — which went down ten whole years ago — are all we want to talk about.

As a quick refresher, here are the basic facts: on the night of September 13, 2009, Kanye West showed up on the red carpet of the VMAs swigging from a bottle of Hennessy. The quote above is from Whitney-Gayle Benta, the former VP of talent relations for MTV News. She saw him acting pretty intoxicated in front of the press and discreetly asked him if he was okay. “I was like, ‘What's up with you?’ And he was like, ‘I'm here living my best life,’" Benta said.

When Kanye got to his seat in the front row of Radio City Music Hall, he started passing the bottle of Hennessy around to other celebrities, according to Jim Cantiello, a former correspondent and producer for MTV News who was covering the VMAs that night. “I thought that was the funniest thing ever,” he said.

The show had barely begun when West bum-rushed Taylor Swift onstage, outraged that she’d won “Best Video by a Female Artist” over Beyoncé. Most people know the rest, but click play below to relive the moment.

Incredibly, Swift pulled herself together enough to sing on top of a taxi cab in the street outside Radio City just minutes later. “We get her prepared, and thank god she's a real pro. She got it together, and [...] she did an amazing performance,” said Jonathan Mussman, former SVP of production at MTV. Fun fact: the first part of the video was sneakily pre-filmed during an all-night shoot on the S shuttle between Times Square and Grand Central in sweltering late summer heat. The second bit, outside Radio City, was really live.

It’s fascinating to revisit the id of 2009 Kanye today, in the context of Kanye in 2019. He’s a multi-millionaire who’s fathered four children with Kim Kardashian, one of the most powerful influencers in the world. He’s become a Trump supporter and gives unwieldy interviews. And he’s one of the best-selling artists of all time. He even founded his own new-age gospel Sunday church service in Calabasas.

Which brings us back to the 2009 VMAs. Kanye might’ve been sloshed, but it was his self-righteousness that propelled him to upstage Swift. He thought Beyoncé’s “Single Ladies” video was better than Swift’s “You Belong with Me.” And since his opinion didn’t align with the accolades doled out by MTV in that moment, Kanye decided to correct things.

What he didn’t know was that MTV had bigger plans. “Best Video by a Female Artist” was small potatoes; it was one of the first awards given out that night. All of the award winners were predetermined (though they don’t tell the artists beforehand), and Beyoncé was slated to win the whole shebang, taking home the Moonman for Best Video. Period.

In the end, some quick-thinking by Van Toffler, former president of Viacom, offered a path to reconciliation. “I walk behind the stage — and sure enough there is Beyoncé and her dad, and she is crying. She was like, ‘I didn't know this was going to happen, I feel so bad for [Swift].’ And that's when it started to click in my head, and maybe hers, about potentially having the whole arc play out in that one night,” he said.

Toffler let slip that “Single Ladies” was the big winner that night. “And wouldn’t it be nice to have Taylor come up and have her moment then?” the media mogul asked one of the most powerful musicians in the world. “Perhaps this is a way to have this come full circle and let [Taylor] have her moment. I would normally not say anything, but I had two crying artists,” he said.

So that’s what happened. Beyoncé gracefully invited the younger artist onstage to make an acceptance speech. “Maybe we could try this again?” Swift asked. Then the two women stood onstage together awkwardly, in semi-solidarity, while a drunk man raged in the night.

More like this
Mariah Carey's 'Glitter' era deserved better
By Treye Green
Steve from 'Blue's Clues' gave us the closure we didn't know we needed
By Kara Weisenstein
Lil Nas X delivered his baby, 'Montero,' along with an ill-fated love story
By Kara Weisenstein
Stay up to date