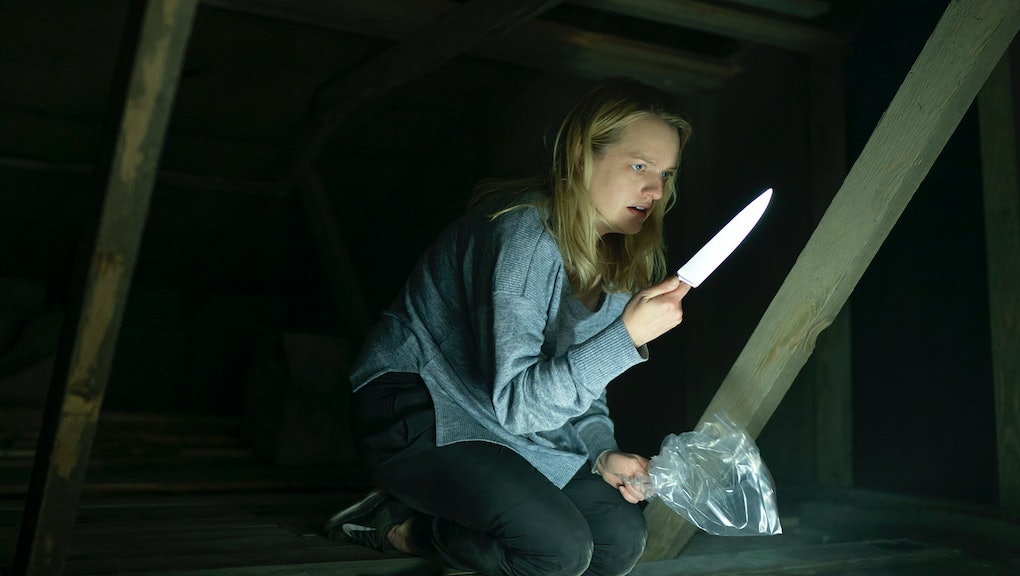 'The Invisible Man' doesn't quite earn its cruelty

So many recent horror films have limited the senses of their heroes and villains — A Quiet Place, Don’t Breathe, Bird Box — and explored how society responds to a threat with some sort of impediment. That monster takes on a more personal form of terror in The Invisible Man, a taut, claustrophobic reworking of H.G. Wells’ 1897 novel that bears little resemblance beyond its title. The film shifts the story's focus to the eponymous villain's victim (Elisabeth Moss,) the irreparable trauma he’s caused, and how little anyone believes her.

We open with Moss’s Cecilia packing up her essentials in the middle of the night, finally ready to break free of her abusive boyfriend and optics expert, Adrian (Oliver Jackson-Cohen.) She escapes the modernist cliffside barracks nearly without a hitch, until the dog sets off a car alarm in the garage, altering Adrian to chase after her and shatter the window of her getaway car. Two weeks later, her sister (Harriet Dyer) brings news that Adrian’s died by apparent suicide.

Cecilia is staying with her childhood friend-turned-cop (a beefy Aldis Hodge,) who along with her sister thinks she’s closer to getting out of the woods. Her incremental steps toward recovery from living in near-captivity — walking to the mailbox is a mountainous task — suggest otherwise. She also can’t shake the lingering suspicion that he’s still out lurking, likely with access to invisibility. This belief becomes strengthened by haunted house gambits like a flickering light, a blanket being yanked off her and her friend’s daughter (Storm Reid, always brightening things up) and a memorable moment where she’s standing outside one night and sees breath but no body.

Director and screenwriter Leigh Whannell last helmed the ultraviolent vigilante flick Upgrade and is a frequent James Wan collaborator, penning the first three Saw films and the Insidious franchise. Here, he thrives in domestic spaces, letting the camera slowly glide from room to room, or just linger and pivot back and forth when needed. Common tasks like unpacking clothes or cooking bacon and eggs summon extraordinary dread, waiting for something to wrinkle in the negative space or burst into flames. These work better than the more conventional jump scares which still employ clever, playful use of invisible-proof household items.

Moss is remarkable as usual, adding another level of gravity and desperation to Cecilia, as she tries to get all of her family and close friends to believe what seems so obvious. Before the Invisible Man’s abuses threaten to uproot every relationship in her life, it takes on more mundane forms of torture, like when she shows up to an interview at an architecture firm to find all her samples were taken out of the briefcase. Moss gravitates to these projects that require unravelling and enduring immeasurable pain, so the material would be a natural fit.

The most generous reading of The Invisible Man is that it’s a timely gaslighting parable, giving a voice to countless women who’ve suffered privately in the presence of unbelieving loved ones. A less charitable one might be: wow, I’m not sure if there’s a point to all this suffering — who is this for? After the dam broke on #MeToo in 2017, exposing decades of widespread abuse, it became common to see art about sexual trauma elevated as “post-MeToo” or re-examined under a new lens. Hazel Cills wrote a great piece for Jezebel about the damage of viewing art through this prism. “But to cast a film or a piece of art as specifically pertinent to #MeToo speaks to a long sexist tradition: the idea that women’s art is valuable insomuch as it’s about tidy realizations of women’s trauma,” she wrote.

Strip away its technical achievements and The Invisible Man’s treatment of Cecilia — especially during a brutal sequence highlighted in the film’s marketing and a shocking reveal in the film’s third act — steers further into trauma fetishism. The responsibility of handling this material as a man dawned on Whannell, who’s said that he interviewed counselors who worked at domestic violence shelters in Los Angeles and that Moss was involved in a number of key choices on set. It’s harder to critique the more crushing elements of toxic masculinity without portraying them, but once it pushes past a certain threshold, you begin to wonder whose gaze this is for.

Moving the material away from the supernatural — where it might have landed in Universal’s failed Dark Universe franchise — lends the material gravity, but also bends the metaphor into something a bit too literal. We’re given a monster who isn’t really a monster at all, whose instruments of harm are tactile and human. You don’t have to look hard for those.

More like this
The bittersweet success of 'Shang-Chi' after a year of pandemic-fueled Asian hate
By Brandon Yu
The 8 best reality shows you're not watching, but should be
By Brandon Yu
Merely changing ‘The Activist’ from game show to documentary misses the point
By Shamira Ibrahim
Stay up to date