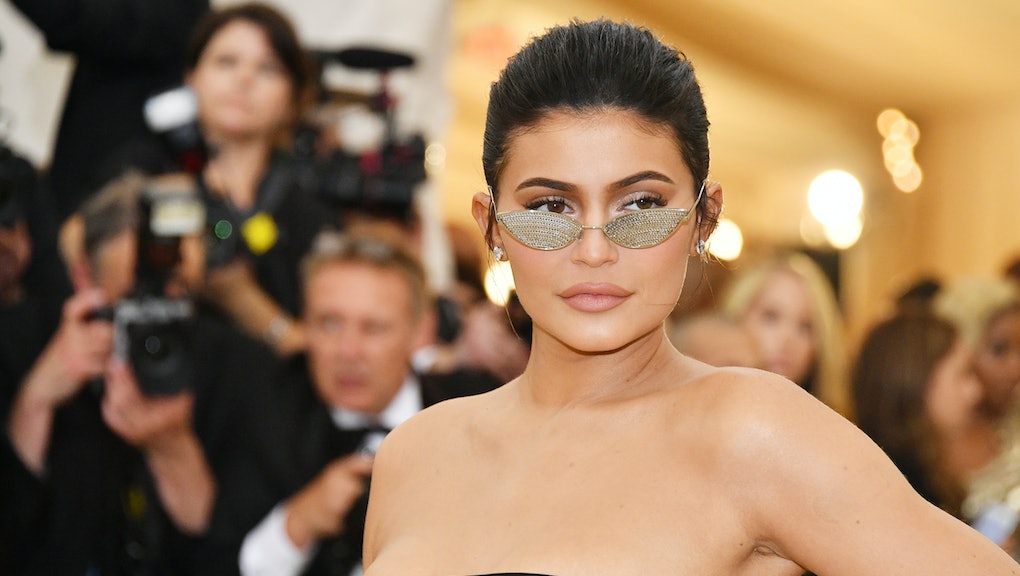 This year for Christmas, Kylie Jenner’s 1-year-old daughter Stormi got a palatial furnished playhouse from her grandmother, Kris Jenner. It has two levels, a balcony, and even comes with a doorbell, meaning it’s both larger and more functional than many New York City apartments.

Kylie narrates her Christmas vlog with such nonchalance she almost tricks you into believing a house that could comfortably house a petite adult is a normal thing to give an infant. But the house is a fairly modest toy by Kardashian standards. Stormi’s cousins Penelope, Mason and Reign (Kourtney’s kids) have their own $100,000 playhouse featuring white shag carpets, which seem totally child-friendly.

Not to be outdone by her mother and the baby mansion, Kylie gave Stormi (who is, again, a baby) an even more opulent present: an absolutely gigantic diamond ring. Kylie shared a clip of her daughter wearing the bling on her Instagram story, then deleted it pretty quickly when the backlash was swift and harsh. And that’s not all, folks. According to another since-deleted Instagram story, Stormi also got a pony. Pardon me while I go watch the Christmas breakfast scene in Little Women again — where they give all their food to the poor — to detox.

The list of extravagant presents goes on and on and on. Last Christmas, Kim Kardashian flew to Japan and brought back at least eight Louis Vuitton handbags for “all of the baby girls in the fam,” including True, Dream, Stormi and her daughter Chicago. That’s anywhere from $1,500 to $7,000 per infant and anywhere from $12,000 to $56,000 total.

This Christmas, Kim and her husband Kanye West upped the ante and stoked controversy by giving their 6-year-old daughter North the custom velvet jacket Michael Jackson wore to Elizabeth Taylor’s 65th birthday as well as the hat the late singer wore in the music video for “Smooth Criminal.” Evidently, North is a huge Michael Jackson fan. “We knew she would love this, so we won this on an auction for Northie for Christmas,” Kim said in her Instagram story. “She is so grateful and so excited.”

No matter how rich and famous you are, giving an accused pedophile’s clothing to a 6-year-old is just bizarre. But questionable parenting choices aside, Kim dropped some serious cash on North’s present. The auctioneer, Julien’s Auctions, estimated the jacket was worth between $10,000 and $20,000. Kim bought it for $65,625. The white wool hat, which still has Jackson’s makeup on it, had an $800 to $1,200 estimate. The West family dropped $3,840 to cop it.

The Kardashian tribe sure knows how to flex. They hardly invented extreme wealth, but they’re easily the most visible celebrity influencers in the world, worth millions apiece — and in Kylie’s case, a billion.

It’s easy to write-off their flashy spending as harmless, view it as entertainment, or even get some satisfaction out of judging them for it. Peeking into their lives is just fantasy. But psychologists are starting to understand the insidious ways social media rewires our brains.

Seeing these images day after day makes extreme wealth and influence seem attainable, when it’s just not. The gap between the richest and poorest people in America is the highest it’s been in 50 years, which makes the Kardashians’ flexing all the ickier. The whole family ought to take a page out of Cardi B’s book to atone for their spending. The rapper bought $5,000 worth of gifts for children in need just before Christmas.

The other issue is that funneling so much ostentatious capitalism into our brains is really bad for people. "After over 200 studies, we know that the more people endorse materialism, the worse their well-being. They're less empathic, less prosocial, more competitive," Tim Kasser, a psychologist at Knox College and author of The High Price of Materialism, told Wired.

"They're less likely to support environmental sustainability. They're more likely to endorse prejudicial and discriminatory beliefs,” Kasser added. Well, here’s hoping 2020 bestows us with more influencers like Greta Thunberg, and no more Kardashians ever.