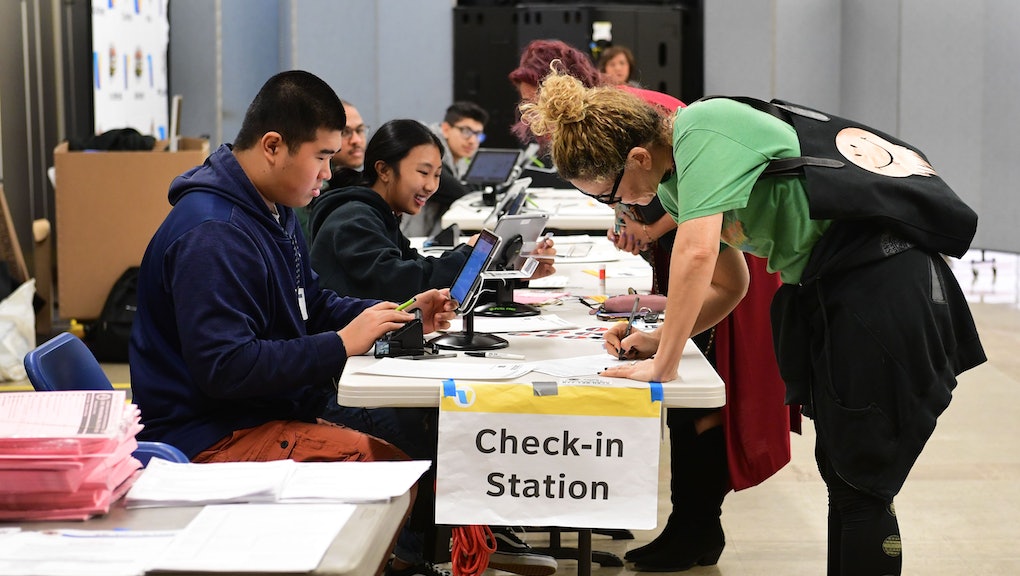 The Kentucky GOP is working to expand access to the vote

Republican members of the Kentucky state legislature are working to make it easier to vote. The Easy to Vote bill, announced by Kentucky Secretary of State Michael Adams in a video posted to Twitter on Tuesday, would extend voting hours, add new polling locations, and expand absentee ballot access among other improvements.

Adams, a Republican, succeeded Democrat Alison Lundergan Grimes in the secretary of state position after Grimes was ineligible to run for re-election in 2019 due to term limits. In his video announcement, Adams said, "Throughout my campaign for this office, I promised I'd make it easy to vote and hard to cheat. ... If enacted, [the Easy to Vote bill] will reduce county's election costs, shorten wait lines at the polls, and increase voter participation."

The legislation, also known as House Bill 596, was introduced to the state legislature by Republican state Rep. Jason Nemes. “My hope is that this bill will make it easier for our citizens to vote by expanding the category of those who are allowed to vote early and increase the locations where voters may vote, in their county, on election day,” Nemes told Mic in an email. He added that hopes the bill will pass the Republican-controlled state legislature in time for the Kentucky's primary May 19.

Crucially, Adams alluded to his efforts to make it "hard to cheat" in Kentucky's elections, too. The Easy to Vote bill was preceded by a voter ID law that would require people to produce photographic identification before they're able to cast a ballot. That bill, known as Senate Bill 2, passed in the state Senate with a party-line vote and will take effect before the November election. The American Civil Liberties Union of Kentucky has called it an unnecessary barrier to voter access, the Louisville Courier-Journal reported.

Joshua Douglas, a professor of election law and voting rights at the University of Kentucky College of Law, wrote on Twitter that while he doesn't support voter ID laws, Kentucky's SB2 is "a fairly mild form of a voter ID law." He celebrated the introduction of HB596 on Tuesday, and told Mic in an email, "I'm glad that Republicans are promoting positive voting rights reforms. That does not happen in a lot of other states," adding, "Expanding voting hours and changing the registration deadline can improve turnout overall."

Kate Miller, the advocacy director for the Kentucky arm of the American Civil Liberties Union, tells Mic that any bill aimed at increasing access to the vote in the state is popular on both sides of the aisle, given that Kentucky does not currently allow for early voting. Though the bill only proposes increased early voting access for "essential service personnel" such as first responders, it's a start, says Miller.

Kentucky saw a major increase in voter turnout in its 2019 election, with more than 42% of registered voters in the off-year election for governor. That was the highest turnout rate in the state since 2003, and more than double the turnout in the state's 2019 primary election, which was around 19%.

The Easy to Vote bill may strike some political observers as dissonant, given it comes at a time when other GOP-controlled statehouses are working to make the vote harder to access, not easier. Even within the Kentucky legislature, there's SB2, which Adams also initiated. Voter fraud is actually extremely rare, and studies show that photo ID laws don’t actually help reduce voter fraud.

Douglas said in an email to Mic that there is “no need for a photo ID bill” and that “even one valid voter who has a harder time voting is one too many.” Still, he said, "I think [Easy to Vote] is part of an overall package, including the photo ID law that Secretary Adams has promoted, such that they go hand in hand. I don't support a photo ID law for voting, but I'm glad it is going alongside a law to expand voter access."

Miller adds that photo ID laws negatively and disproportionately impact older Americans, voters of color, and those who are generally less likely to need or use photo identification. "We are very concerned with Senate Bill 2 for a variety of reasons," Miller tells Mic. "There has never been an incident of in-person voter fraud in the state of Kentucky — ever."

Kentucky Gov. Andy Beshear, a Democrat, took office in December 2019 after winning a close race against incumbent Republican Matt Bevin. One month after his election, Beshear signed an executive order restoring voting rights for formerly incarcerated individuals — about 140,000 individuals in the state of Kentucky who would have otherwise been permanently disenfranchised. At the time, Kentucky had the third-highest voter disenfranchisement rate in the country, affecting 25% of African American voters in the state.

More like this
This very bad Florida voting bill furthers the GOP push to disenfranchise voters
By Vanessa Taylor
Caitlyn Jenner's campaign is off to a great start!
By Rafi Schwartz
Texts from Matt Gaetz's "wingman" allege that the congressman paid for sex with a 17-year-old
By Rafi Schwartz
Stay up to date