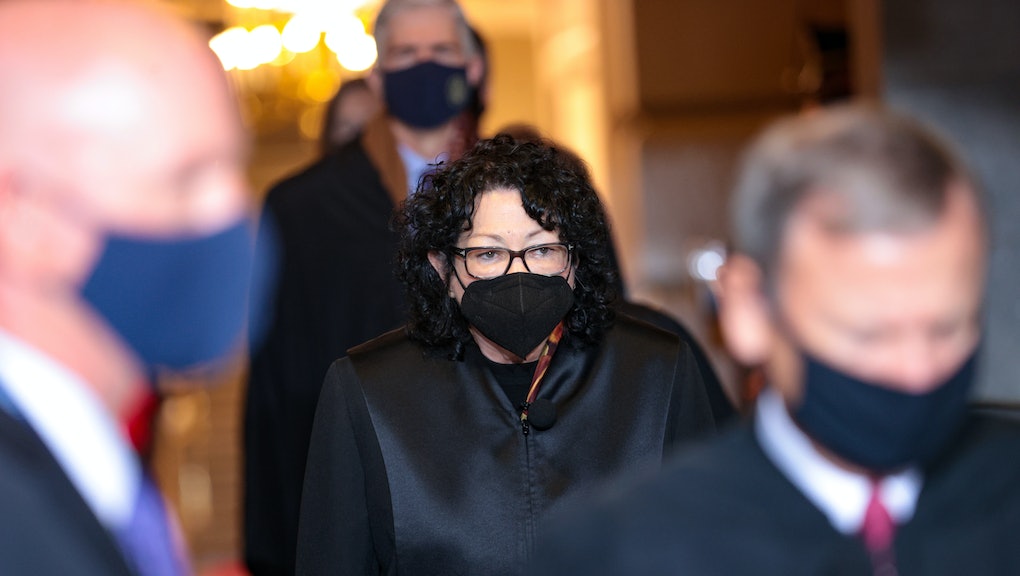 When "anti-feminist" attorney (his words) Roy Den Hollander fired his gun into the New Brunswick, NJ home of U.S. District Court Judge Esther Salas this past summer, he did so reportedly fueled by the belief that Salas was a "lazy and incompetent Latina judge appointed by Obama."

Now, seven months after Den Hollander — who was later found dead of an apparent self-inflicted gunshot wound — killed Salas's son and seriously injured her husband, the judge is opening up about the experience. Speaking with CBS News's 60 Minutes for a report airing this coming Sunday, Salas suggested that Den Hollander was also targeting another officer of the court: Supreme Court Justice Sonia Sotomayor.

Salas described never-before revealed contents of a locker owned by Den Hollander, which investigators searched after the shooting. "They found another gun, a Glock, more ammunition," Salas told 60 Minutes. "But the most troubling thing they found was a manila folder with a workup on [Supreme Court] Justice Sonia Sotomayor."

While a Supreme Court spokesperson declined to comment to CNN on the matter, Den Hollander had, in fact, been quite public about his loathing for the Obama-nominated Justice. In a more-than 2,000 page collection of writings posted online in 2019, the attorney accused Sotomayor of being "angry that nobody had invited her to her high school senior prom," The Atlantic reported.

Den Hollander also reportedly wrote that Sotomayor was "52 years old, prime age for a Feminazi." He even compared Salas herself to the Supreme Court justice, writing that the former, his eventual target, "clearly wanted to further her career by moving up the judicial ladder to the Court of Appeals or maybe even the Supreme Court." He continued, "After all, there was now a Latina seat in the form of Sotomayor on the Court."

Salas' revelation comes amidst a crescendo of animosity toward judicial officials, with a 400 percent increase in threats — including hate mail, phone harassment, protests at their homes, and murder attempts — to federal judges over the last five years, per CBS.

The U.S. Marshals, tasked with protecting judges, are now asking for 1,000 more officers (which would cost $250 million), while Salas is part of a group pushing for tighter safety measures to protect judges from the sort of harassment and violent threats she — and, reportedly, Justice Sotomayor — faced this past summer. One such measure would be the passage of a federal bill, named for Salas's late son, that would prohibit government agencies from posting judges' personal information online, among other protections.

"Who knows what could have happened?" Salas told 60 Minutes during her interview, which airs in full on Sunday. "But we need to understand that judges are at risk."