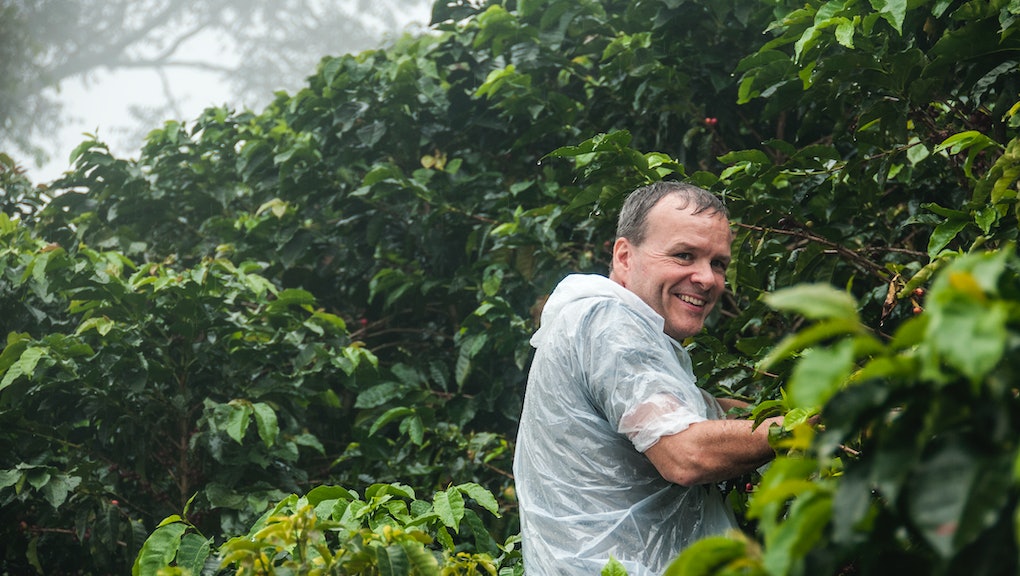 The Many Lives of Laughing Man® Coffee: Urs Stuker wants to create something that lasts

Urs Stuker has been a lot of places. As a coffee buyer for Keurig Green Mountain, Inc.’s Laughing Man® Coffee, he currently floats between Uganda, Honduras, Peru, and Colombia. When we talk, he’s in Peru, which becomes evident with the abundant sounds of birds chirping along the streets of Jaen.

Urs began his career 30 years earlier at a trading company in Switzerland – where he was raised – and spent more than 15 of those years working at sources in Ecuador, Honduras, and Guatemala. He came to work with Laughing Man® Coffee in 2015 and was immediately impressed with how the brand engaged with farmers on an individual level. For Urs, the coffee business is one big family and he is still interacting with people he’s known since his early years in the industry. One of the most rewarding things, he says, is not just interacting with people he’s known for many years but improving the lives of people he doesn’t know. With the social programs sponsored by Keurig Green Mountain, Inc. and Laughing Man® Coffee, Urs has been able to witness the impact these livelihood programs have on farmers and their families – whether through investing in farmer trainings, improving access to clean water, providing consistent and sustainable incomes or other livelihood programs, Urs is passionate about the social impact these initiatives can create.

“One of the programs we have worked on together with the Laughing Man Foundation is housing improvements. Members of the Cooperativa Coocentral in Huila, Colombia get a chance to apply for funding to fix urgent housing problems or renovate their homes for the health of their families, like with new roofing, smoke free kitchens, or sanitation improvements. It’s a hands-on program and the families and communities often contribute. The impact is great and the families are not only very proud of their renovated homes but they are also deeply engaged [in the programs, even working to] help other[s in their community].” Urs has seen the improvements and work done for himself, sharing cups of coffee with farmers who have directly participated in this program.

“The beauty about this program is that farmers get the feeling of ownership. They know where their coffee ends up, they know the brand. It becomes very rewarding for them to see that their hard work is appreciated by consumers. They can actually see their coffees in advertisements.”

One of Urs’s favorite memories from his career with Laughing Man® Coffee was when he was able to help in preparing for a crew to go and film a commercial of Colombia Huila Coffee in a small village called Garzón. “[The attendees] said we put their little village on the world map by having the Laughing Man® Coffee brand down there. [After we] showed the video [of their village at an event hosted by] the Specialty Coffee Association, there were tears in their eyes. They were so proud of what they had achieved. [It was] very rewarding not only for me but for everyone involved in the program.”

While Urs is proud of his work with Laughing Man® Coffee, he is far from settling down. He says he’s got a lot more coffee origins on his bucket list that he’d like to visit, specifically mentioning the areas of India, New Guinea, and Kenya. Urs says that if he can continue to spread sustainable opportunities, he can consider that a success because it’s something that lasts.

“You know, everything is very short lived. Everything is quick. If you manage to leave a legacy behind, and it sticks for years and years to come I think that is success. If you've managed to leave something behind and its impact will have made a long lasting change, that is success. It must be the Peruvian air that is making me philosophical.”