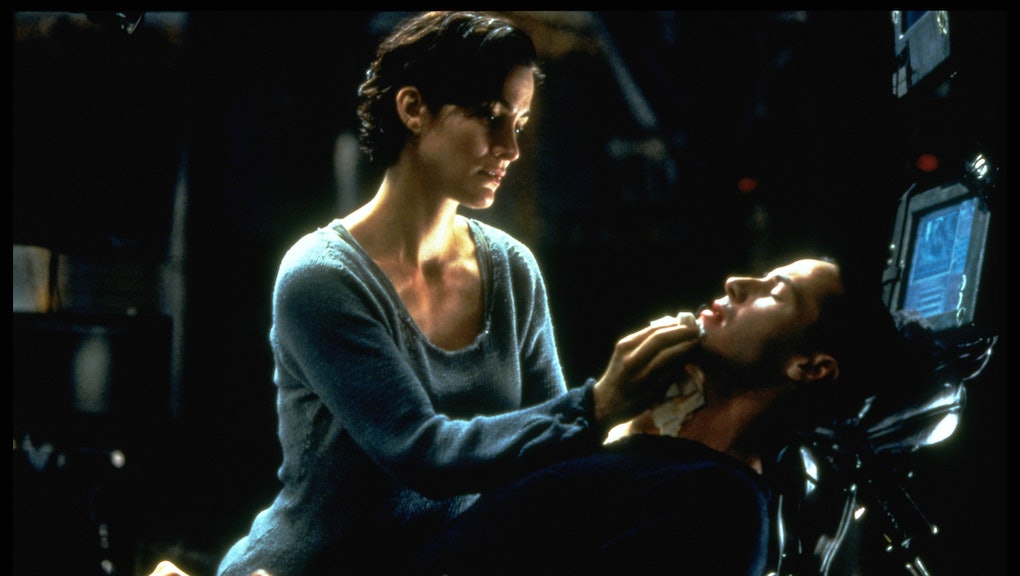 Neo and bullets being frozen in mid-air is back. Today, the world got a glimpse of the first trailer for the filmmaker Lana Wachowski's The Matrix Resurrections, and it's a thrilling mirror into a world we already live in.

In The Matrix Resurrections trailer, Thomas Anderson, played by Keanu Reeves and dressed like John Wick, is confused by recurring dreams of his past life as humanity's savior, Neo. He's also been scarfing down blue pills, which in The Matrix world means he's been ingesting reality suppressors that keep him in the fabricated world of the matrix. Eventually, it appears Anderson becomes Neo again, displaying his trademark powers such as stopping bullets in mid-air, but this time also redirecting a missile in mid-flight — a major scene we'll all be waiting to see on a giant movie screen. He's visited by an as-of-yet unnamed character played by Yahya Abdul-Mateen II, who makes him decide between the red and blue pill similar to Laurence Fishburne's Morpheus in the original Matrix trilogy.

The trailer is deeply referential of the past three Matrix films, all but ensuring die-hard fans will have hours of fun digging through multiple viewings to find the easter eggs. Outside of the obvious callback to the famous red pill/blue pill scene between Morpheus and Neo from the first Matrix, Abdul-Mateen II is seen simultaneously shooting two machine guns with his arms crossed similar to how Neo began his shooting rampage in the lobby scene of the original Matrix movie when him and Trinity were trying to save Morpheus. Before Anderson becomes Neo in the first Matrix film, he gets mysterious messages on his computer instructing him to follow the white rabbit before coming across a woman with a white rabbit tattoo. The trailer shows Anderson once again being met by a woman with a white rabbit tattoo, who instructs him to follow her to find the answers he seeks.

When the new Matrix film hits theaters and HBO Max on December 21, it'll be re-entering a world it not only predicted, but partly shaped. When the Matrix trilogy began in 1999, cell phones were so obscure, the characters of the film exited the Matrix by picking up landline phones and hopping in phone booths that are now practically extinct. At the time, Morpheus's grand speech explaining a civilization blindly adhering to a system ruled by technology from the first Matrix film was at best prophetic, but was a bit divorced from a reality where less than half of Americans owned home computers, social media was relegated to obscure message boards, and the internet had yet to crumble the music industry. Now, the average person spends an average of 2 1/2 hours surfing the web on their phones, people have died from blindly walking into oncoming traffic in order to capture digital Pokemon, and we're so digitally interconnected as a human race that increased time on social media has been linked to an increased risk of teenage suicide. We're not transforming into suit-wearing Agent Smiths, but The Matrix's prediction of a world full of people who derive their identity from technology has pretty much come to fruition.

People aren't shoving chords in the back of their heads to virtually transport their body to a digital world where they can learn karate as Neo famously did in the first Matrix movie. But, people are strapping into virtual reality headsets to fight Resident Evil zombies in the digital space while their real bodies look like they're running away from air. Artificial intelligent machines haven't enslaved the human race in pods as bio-electric power for the AI overlords to snack on as in The Matrix. But, they do drive us around in Teslas, can beat humans in almost any game, and have Elon Musk terrified for its potential to make humans obsolete. When Matrix-esque mass surveillance from our government is old news, it's safe to say our present reality is the past's science fiction.

More than just predict the future, The Matrix trilogy inspired actual scientists to rethink the entire concept of reality. A number of scientists actually believe there is a possibility our entire reality is nothing but a Matrix-style computer simulation. In 2013, nuclear physicist Silas Beane wanted to test if this was possible by studying cosmic rays. Musk himself has even started a company just to be able to connect the human brain to computers and fully believes we're living in a simulation.

Whether it's our mindless obsession with Instagram likes or super geniuses spending billions to turn us into cyborgs, it's safe to say we're all living in The Matrix, so the new film should feel right at home.

More like this
Alanis Morissette is really not happy with the 'Jagged' documentary
By Kara Weisenstein
Mariah Carey's 'Glitter' era deserved better
By Treye Green
The unmatched power of Michael K. Williams
By Bonsu Thompson
Stay up to date