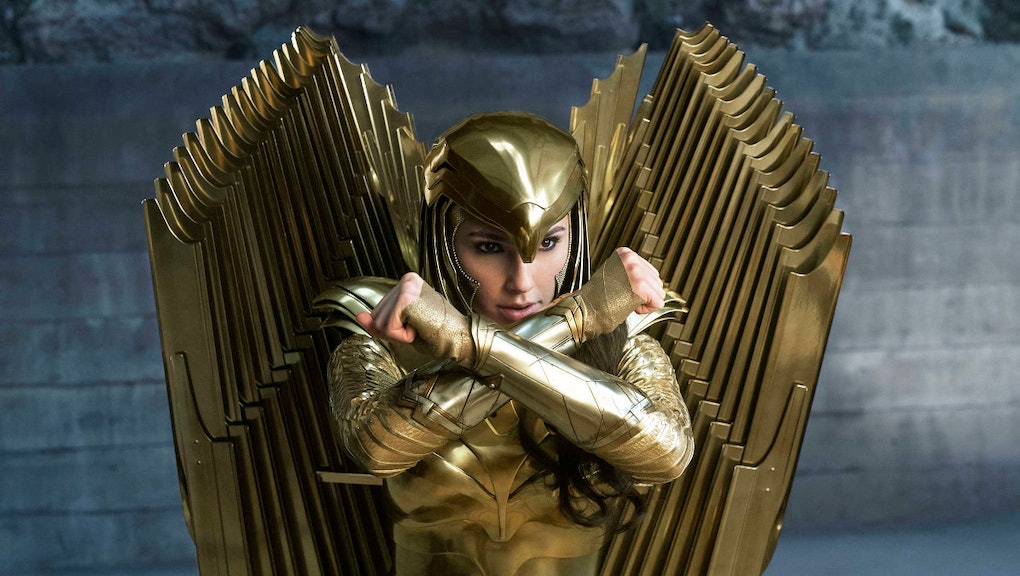 The messy politics of 'Wonder Woman 1984'

Be careful what you wish for. That’s the cautionary tale at the heart of Wonder Woman 1984 (the sequel to the Gal Gadot-helmed 2017 original) where our titular heroine has to save the world from a grifter villain enabled by an ancient mystical artifact that grants wishes, but for a price.

Wonder Woman gets her dead lover back but in exchange she loses her powers. The villain Max Lord (Pedro Pascal) gets the oil empire he dreamed of but loses his health. And as more and more people get their wishes, the world descends into chaos and nuclear war. (Spoiler alert: Wonder Woman saves the day.) You could argue that the mechanics of the wishing stone can be read as an allegory for the capitalist and colonialist pursuit of progress and consumption (although in real life it’s the working class and the environment that tend to pay the price for billionaires’ sins). But if we turn the stone’s logic back on the movie itself (and the larger franchise celebrated for female empowerment), what’s the price we pay to feel good about a Hollywood blockbuster where someone of the so-called fairer sex beats up the bad guys? Basically, what’s the cost of commodified (white) feminism?

In 1978, American artist Dara Birnbaum remixed footage from Wonder Woman, the live-action television series (1975–79) starring Lynda Carter. Nearly six minutes long, Birnbaum’s moving-image work titled Technology/Transformation fragments and loops clips from the TV show — many feature Carter spinning, focusing on her transformation from secretary into superhero, punctuated by explosive bursts of fire. Edited together these clips read like a stuttering series of GIFS, their effect both hypnotic and jarring. In a 2002 interview, Birnbaum explained her logic in making the work: “I felt I had to capture that idealized vision of a woman, with a perfect body, wrapped in an American flag. This was a horrendous image for me.” The artist was speaking just months after then President George W. Bush, priming the public for the invasion of Iraq, had identified “the axis of evil” as Iraq, Iran, and North Korea. “If Bush has his own ‘axis of evil,’” Birnbaum continued, “then that image was mine... For me ‘the evil’ was and is… an industry that men dominated, where they could form a commodified, corporate image of women.”

Birnbaum’s comments are interesting to consider in light of the latest iteration of the Diana Prince story, Wonder Woman 1984, a tentpole superhero sequel released on Christmas Day, which itself is a commodified corporate product timed to maximize profits. Wonder Woman played by Gadot is still that idealized vision of a woman with a perfect body wrapped in an American flag that Birnbaum was critiquing. And the artist’s Bush-era comments feel especially pertinent considering the 2020 film’s pro-imperialist messaging comes in the form of an American businessman embezzling oil in the Arab world, racist Middle Eastern stereotypes, and the positioning of Wonder Woman as a white savior. One thing that’s (sort of) changed since Birnbaum’s comments, however, is that Hollywood is arguably not as male dominated. Wonder Woman (2017) — the first blockbuster superhero movie centered around a female superhero — and this new sequel are both directed by a woman, Patty Jenkins.

The collective eagerness to uncritically celebrate Hollywood’s slick and sanitized vision of girl power tells us a lot about that recent cultural moment."

When the first chapter of the Gadot-helmed franchise hit theaters in 2017, its message of kick-butt female empowerment was generally well-received. Feminism was as mainstream as it had ever been. Just months earlier, 200,000 (many in pink pussy hats) protested Donald Trump’s anti-women sentiments, taking to the streets in Washington, D.C. It was the largest single-day demonstration in U.S. history. An estimated 5 million people joined worldwide via satellite events. The Guardian proclaimed the 2017 Wonder Woman “a masterpiece of subversive feminism.” The kicker summarizing Zoe Williams’s article argues “yes, the new movie sees its titular heroine sort of naked a lot of the time. But the filmmakers have still worked to turn sexist Hollywood conventions on their head.” While Williams’s article doesn’t make a very good case for exactly how Jenkins’s film subverts such conventions or why Gadot’s body isn’t being objectified, the collective eagerness to uncritically celebrate Hollywood’s slick and sanitized vision of girl power (see similarly laudatory articles about the film’s feminism in USA Today, the Washington Post, etc.) tells us a lot about that recent cultural moment.

Its sequel Wonder Woman 1984 comes at a very different moment, the first holiday season since the novel coronavirus. And with viewers trapped at home, ready to chime in with their hot takes, the online response has been swift and overwhelmingly negative. The movie is, in many ways, a hot mess. For starters the title is confusing, as there’s nothing dystopian in the Orwellian sense to the scenario, it just happens to be set in the year 1984, where Wonder Woman is living as a civilian working at the Smithsonian. The script is weirdly paced, a lot of the cliché tropes (nerd girl turned hottie, villain seeking world domination) are awkwardly jammed together, plus there’s some badly realized CGI (Kristin Wiig’s Cheetah alter ego has been maligned as “worse than Cats”). All this jankiness makes the film’s ideological underpinnings more apparent. The original was also propagating a certain myth of American exceptionalism (read Josephine Livingston’s deconstruction of exactly how for the New Republic) but the film was tighter, so it was easier to get swept up in the emotion, theatrics, and high-budget action scenes. Without that, the sequel’s problematic politics are more glaring — and they’re made worse by Gadot’s real-life background in the Israeli military and her public support of attacks on Gaza in 2014.

As many have pointed out on Twitter (including human rights advocate Tareq Alkhudari and political risk advisor Khaldoun Khelil), Wonder Woman 1984 employs racist and xenophobic stereotypes while glorifying its white savior character, played by an actress with a Zionist settler-mindset. In the film, an Arab character’s wish manifests a sand wall which snakes through homes and roadways, separating people from food and water. The structure in many ways parallels the real wall Israel has built separating Palestinians from their homes and families while controlling resources, except in the film Arab people are depicted as the source of their own problems rather than victims of Israel’s military state (which, reminder, is financially supported by the U.S.).

The bad politics don't end there. In real life, the action star has defended Israeli military interventions which wiped out entire families in Gaza — one incident involved four boys being bombed who were playing soccer on the beach. In the film, Wonder Woman’s boyfriend fires an RPG towards Arab children also kicking the football. Gadot’s character then rides the rocket, scooping up the kids before they are run over by other Arabs in armored vehicles.

It's more than just offensive stereotypes, of course. The wall and the children caught in the crossfire demonstrate how the film pulls from familiar contemporary geopolitical conflicts but reimagines these situations to further its ideological aims, making the star-spangled interventionist American look heroic while the enemies of the U.S. and its allies are cast in a less-than-sympathetic light. Wonder Woman 1984 might be smashing the glass ceiling in Hollywood, centering another blockbuster around a female superhero, but its white feminism comes at the expense of the minority groups it maligns.