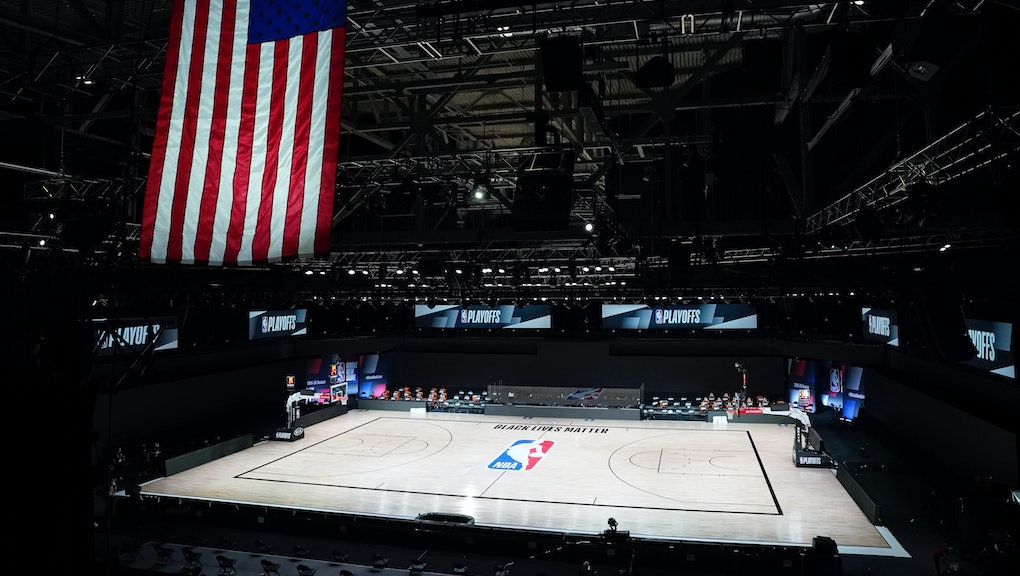 The Milwaukee Bucks' strike was just the beginning

On Aug. 26, 2020, the Milwaukee Bucks made history. They didn’t play a particularly spectacular game; they didn’t actually play at all. Their lack of movement is what had a massive impact. Minutes before they were due to hit the court for Game 5 of their first-round playoff series against the Orlando Magic, the Bucks were nowhere to be found. The players refused to leave their locker room; reports quickly filtered out that the team would not play in protest of the police shooting of Jacob Blake, an unarmed Black man, in Kenosha, Wisconsin.

Officer Rusten Sheskey shot Blake seven times in the back Sunday as he was trying to get into his car. Three of Blake's young children were sitting inside the vehicle. Blake was left partially paralyzed by the attack, which has spurred ongoing protests in Kenosha — about 35 miles south of Milwaukee — and across the country.

As word ricocheted through the sports world of the Bucks’ stand, the Milwaukee Brewers baseball team announced that they would not be playing their Wednesday game either. Within hours, the NBA announced that all three of the evening’s playoff games would be postponed. By the end of the night, teams in three of the other four active major sports leagues in America had joined their strike: Major League Baseball, Major League Soccer, and the WNBA. Tennis star Naomi Osaka joined in too.

The NBA’s players are overwhelmingly Black, and some have gone public with their own experiences with police brutality — including Bucks guard Sterling Brown, who was violently assaulted by Milwaukee police in 2018. At one point, an officer ground his knee into Brown’s neck, the same move by which Minneapolis police officer Derek Chauvin killed George Floyd on May 25. Players have become increasingly vocal about police brutality, demanding accountability and reform. “Black Lives Matter” was painted on the NBA courts in the “bubble” in Orlando, Florida, where the season restarted in July after its coronavirus-induced shutdown.

But the players’ actions Wednesday night spoke louder than any corporate-sanctioned graffiti. As LeBron James — who, as a member of the NBA Players Association, is perhaps the most powerful union worker in America— tweeted: “FUCK THIS MAN!!!! WE DEMAND CHANGE. SICK OF IT.” Later that evening, his team, the Los Angeles Lakers, voted to end the season, as did the crosstown Los Angeles Clippers. WNBA players, meanwhile, staged a powerful visual protest Wednesday, wearing t-shirts with seven bullet holes painted on the back to invoke the seven bullets that hit Blake.

While the NBA players have since decided to resume playing, it was electrifying to see these athletes recognize the power of their labor, if only for a night — or, more precisely, the enormous power that comes from withholding it. While many media outlets erroneously labeled their action a “boycott,” it’s important to call it what it was: a strike, and more specifically, a wildcat strike that was taken in defiance of their collective bargaining agreement. Withholding your money is a boycott; withholding your labor is a strike.

Wednesday brought the power of the labor movement to the forefront of the national consciousness, and it also gave labor organizers the opportunity to urge people to realize their power as workers. When critics of the athletes said sarcastically, “I wish I could just not do my job,” activists responded: “You can. Talk to your coworkers about unionizing, and get organized.” The quip reflected a real energy behind widespread organizing in the U.S. — and, in particular, the growing interest in a general strike.

A general strike is an industrial action in which workers across multiple industries in a particular area — a city, a region, a country, or even globally — engage in a work stoppage. The difference between a normal strike and a general strike lies in its scope and scale: When an individual union goes on strike, it involves only their members, but a general strike brings in everyone, regardless of union affiliation, or whether they’re even in a union at all. It is a truly mass action, one that holds the potential to bring the empire to its knees.

Something’s got to give, and the labor movement already has a century of experience in forcing change.

People have been calling for a general strike throughout President Trump’s term, citing his hateful, white supremacist policies, the economic devastation his administration has levied against the working-class, and his deadly mishandling of the coronavirus pandemic. And while actually planning and executing one would take a truly incredible amount of work, it certainly feels like we’re getting closer than we’ve been in a long time in the U.S. Something’s got to give, and the labor movement already has a century of experience in forcing change.

That said, some unions do seem more up for the fight than others. The Association of Flight Attendants-CWA (AFA-CWA) represents 50,000 flight attendants at 20 airlines, and has earned a reputation as one of organized labor’s most effective unions. The actions the NBA players took Wednesday call to mind the AFA-CWA’s vaunted CHAOS intermittent strike strategy, which has been striking fear into the hearts of airline bosses since it was first instituted back in 1993. The reason CHAOS — which stands for Create Havoc Around Our System — is so successful is because it so profoundly destabilizes normal operations when it’s unleashed. The tactic is scarily simple: Once workers have agreed to go on strike, they keep the actual date, time, and location of the action under wraps. Then, they strike without warning.

It’s a strategy designed to minimize risk to workers while maximizing the impact of the action. As the AFA itself explains, this could mean “a mass walkout for half an hour, a day, or a week at a time, with no advance notice to the company or to the passengers. It may be a strike at a certain domicile or over a certain piece of equipment. We could strike the entire system for 15 minutes, or strike all of the odd numbered gates in a particular city for a day. Or, as AFA-CWA did with success at Alaska Airlines, we may ask flight attendants to walk off individual flights at random with no warning to management.” The bosses never know where to look, and they never know what’s hit them.

CHAOS was developed with flight attendants’ uniquely mobile status in mind, but the concept can be tailored to any workplace. When the Bucks decided, with no warning, that they were stopping work — and then saw that work stoppage spread to other teams and other leagues — they brought a little of that patented chaos to the court. And to the delight of some fed-up lefties and labor folk, there were some elements of a general strike there, too: The NBA action didn’t spread to other industries, per se, but it did cross league lines, bringing in athletes from various sports in an example of the kind of widespread, industrial solidarity necessary to pull off a true general strike.

That’s another area where these athlete-workers have found inadvertent common cause with the AFA-CWA. In 2019, as the devastating government shutdown dragged on and thousands of furloughed government workers were suffering, AFA-CWA President Sara Nelson, one of labor’s most charismatic yet militant leaders, called on the nation’s labor leaders to trigger the nuclear option. “Go back with the fierce urgency of now to talk with your locals and international unions about all workers joining together to end this shutdown with a general strike!” she roared at an AFL-CIO dinner that January.

Ultimately, the threat of a large-scale, millions-strong work stoppage was enough to scare the Trump administration into ending the shutdown. Even mentioning the specter of a general strike was a huge deal, given that the U.S. hasn’t seen one since the 1946 strike in Oakland, and before that, in Seattle in 1919. It’s a smaller scale, of course, but the NBA players’ full-throated shout that athletes should wield their power as workers recalls Nelson’s seminal call to action.

The owner class needs the workers, not the other way around.

In other countries, like France and India, the general strike has been deployed much more recently, and more frequently. The labor movements in those countries wield a lot more power as a result. But in the U.S., a toxic cocktail of declining union power, anti-worker labor laws like the Taft-Hartley Act, and the country’s total lack of a safety net have made it difficult for all of America’s workers to strike at once.

But the owner class needs the workers, not the other way around. Athletes made that clear last night, and more workers should seriously consider following suit. It’s a Herculean task, but by organizing new support structures within the labor movement to account for the loss of income and stability a strike like this would demand, it could happen. Mobilizing existing workers’ rights organizations and mutual aid networks like tenant unions, eviction defense groups, and community food programs to pick up more slack would also help workers sustain a widespread work stoppage. For every worker who walks a picket line, there are countless others performing support and solidarity work behind the scenes and creating the conditions for the strike to succeed.

Still, a general strike seems unlikely in the U.S. Unions are not a monolith; some are downright conservative, and not every union member is going to be on board. Even if the members demanded it, they’d have to contend with reluctant leadership, and even if they got past that hurdle, U.S. labor law still isn’t on their side. But if organized workers expanded their effort to include the millions upon millions of non-union workers, as well as those who are unemployed, or unable to work, or being forced to engage in prison labor due to their incarceration status, the movement could build up an enormous amount of power.

Strikes are hard, which is why they are so powerful.

For an action on this scale to work, labor would also need to bring in reinforcements from across the rest of society too, including the millions of disaffected, struggling people in this country who are desperate for a change. Elected officials would need to pass legislation that actually benefits the working-class; the lack of medical care, child care, mental health care, and other basic resources for working-class people makes it extremely difficult to ask people to strike. In America, most people simply can’t afford to skip a day’s work or afford to risk retaliation from their employers.

Strikes are hard, which is why they are so powerful. They require a lot of sacrifice and commitment, and when you’re already struggling, it can be difficult to make that leap — even when the country isn’t in the grip of a deadly pandemic and gargantuan unemployment wave. The police — who are, ironically and shamefully, a heavily unionized workforce — would surely be called in to break the strike, which for them, tends to mean cracking skulls. It’s a tall order.

But that’s not to say it can’t be done. Why not demand the impossible? The need is there. And increasingly, so is the desire. There are already rumblings of a potential general strike effort on Election Day. If the people really want a general strike, the best time to start organizing one was four years ago ... but the second best time to start is right now.

More like this
Your burnout is about more than just your damn job
By Tracey Anne Duncan
Vaccines are good. Threatening to evict someone over them is not
By Rafi Schwartz
After 9/11, the U.S. leaned into security theater. Here's how that's playing out 20 years later
By Vanessa Taylor
Stay up to date