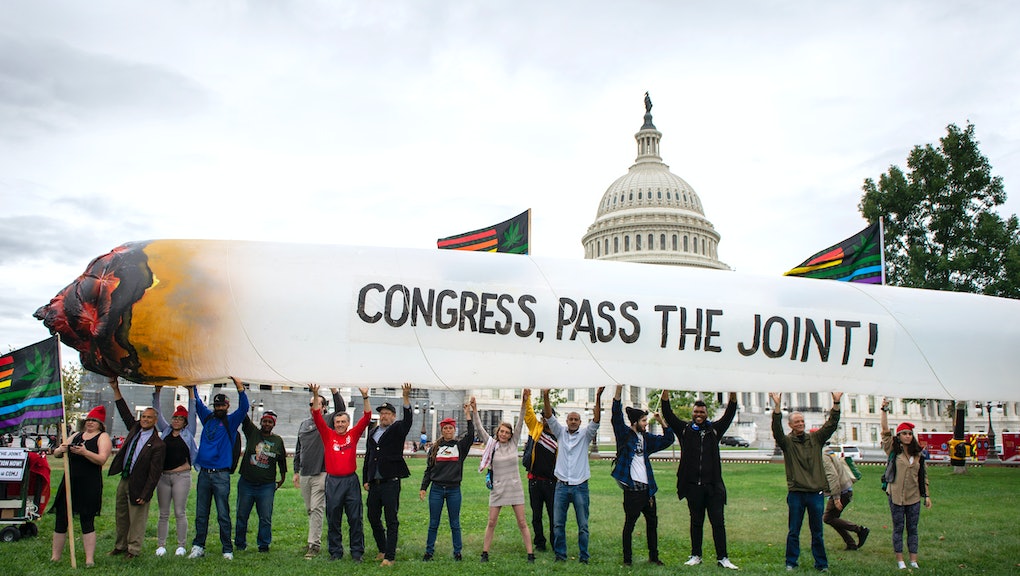 The U.S. House of Representatives on Friday took an immense stride toward a more just and equitable drug policy, passing a long-awaited bill to decriminalize cannabis at the federal level and expunge criminal records from those with non-violent federal pot convictions. Initially drafted in July 2019, the MORE Act (full name: Marijuana Opportunity Reinvestment and Expungement Act) is officially intended "to decriminalize and deschedule cannabis, to provide for reinvestment in certain persons adversely impacted by the War on Drugs, to provide for expungement of certain cannabis offenses, and for other purposes."

In passing the House by a vote of 228-164, it becomes the first federal cannabis legalization legislation to be approved by either chamber of Congress, and comes as more and more legislatures have passed similar measures at the state level.

"Forty-seven states have reformed their laws regarding marijuana possession and usage," House Majority Whip Jim Clyburn (D-S.C.) tweeted after the bill's passage. "It's time the federal government joined them."

In addition to dropping cannabis from the Controlled Substances Act, the bill also establishes a federal trust fund "to support various programs and services for individuals and businesses in communities impacted by the war on drugs" through a 5% tax on cannabis sales. It also bars the government from denying both federal benefits and immigration protections from those with certain types of marijuana convictions.

Whether the government will actually take the next step to legalize cannabis is unlikely, given the current Republican majority in the Senate. Majority Leader Mitch McConnell (R-Ky.) has been a vocal opponent to legalization efforts, calling marijuana hemp's "illicit cousin which I choose not to embrace" in 2018 and adding, "I do not have any plans to endorse the legalization of marijuana." Nevertheless, despite McConnell's opposition, an equivalent bill in the upper chamber has already been introduced by soon-to-be Vice President Kamala Harris.

"By going on the record with this vote, House members have set the stage for a much-needed legislative showdown in 2021 when we will have the Biden administration in office — one that has publicly expressed an appetite for advancing the restorative justice remedies outlined in the MORE Act," explained National Organization for the Reform of Marijuana Laws executive director Erik Altieri in a statement following Friday's vote. "We are primed and ready for this legislative debate and we expect, ultimately, to win it."

For his part, President-elect Joe Biden has been decidedly lukewarm on the prospect of federal legalization. Still, with nearly 70% of the country in support of legalized weed, it seems like only a matter of time before cannabis is fully embraced — or at least tolerated — by both federal lawmakers and, if not this upcoming White House, another one in the not-too-distant future.

More like this
So weird how Sean Hannity is super into the vaccine now
By Vanessa Taylor
How to stay sober when everyone's desperate to party
By Tracey Anne Duncan
Here's how scientists plan to create a less addictive opioid
By Aaron W. Harrison
Stay up to date