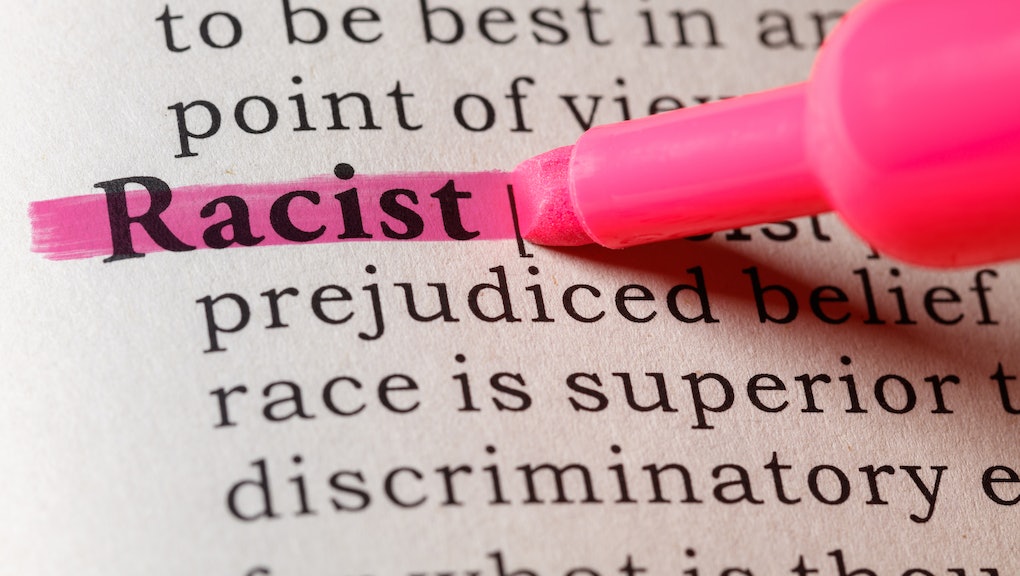 The most racist people are also the least likely to recognize their own racism, according to a new study

According to a recent study, the most racist people among us may also be the most ignorant to their biases. New research published in the academic journal Personality and Individual Differences concludes that the most prejudiced participants in a study evaluating attitudes about bias were also the same people who "overestimated their levels of racial and gender-based egalitarianism." And the implications of claiming your lack of racist or sexist beliefs when your actions and thought patterns prove just the opposite can be hugely dangerous.

The concept to psychologically categorize this lack of self-awareness actually dates back to 1999, with the establishment of the Dunning-Kruger effect, a psychological phenomenon that has made its way back into public discourse 20 years later, at the height of the Trump administration. The effect is, simply, a cognitive bias in which someone cannot accurately assess themselves, and therefore inflates their self-assessments. Sound familiar?

Naturally, without a level of self-reflection, a person cannot work towards self-improvement, one of the many dangers of a person believing they are not as racist or sexist as they truly are. "In line with the Dunning-Kruger model, this research found that very prejudiced individuals (i.e., those low in egalitarianism) may be genuinely unaware of their shortcomings because they lack the meta-cognition necessary to perceive them," write the study's authors, Dr. Keon West, reader in social psychology at the University of London and Dr. Asia A. Eaton, assistant professor of social psychology at Florida International University.

To evaluate a specific type of racism in their study, the social psychologists focused on anti-black racism, a proliferating bias, to analyze the attitudes of 148 voluntary participants. 79.1% of the participants were white, while smaller percentages identify as South Asian (13, 8.8%), East Asian (2, 1.4%), Middle Eastern (1, .7%) and ethnically mixed (15, 10.1%). Participants were asked to rank their egalitarianism in relation to race, with a score of 50 meaning a person was average and 99 indicating being less racist than everyone else. 75 was the average score for participants, with the greatest deviation in the self-reported result to the score from participants' Black vs. White Implicit Associations Test, found in those who scored most poorly on the exam to objectively analyze their biases and attitudes about race.

While the researchers predicted that, for various factors (including social norms), people would overestimate their egalitarianism, the researchers ended up finding that the people who overestimated their lack of racism were, in fact, the most racist. For these people, the diversity training program all participants voluntarily enrolled in as part of the study had no effect on the way they saw their own biases. Which, yeah, is pretty bad. If you can't recognize or admit to your own shortcomings, how can you learn and grow and actually become the person you think yourself to be? It's not that a person cannot necessarily learn to be less biased and more open minded, but how can a person who denies their failures in these categories think they need to learn more? Why would someone who arrogantly and erroneously believes they are not racist be willing to learn more about an area they feel they already excel in?

Claiming not to be racist while still harboring anti-Black or racially biased attitudes is incredibly dangerous, from the way one interacts with the world on a daily basis to the way a person may perceive larger issues and problems in relation to themselves and their community.

So how do we fix the bias problem of people who cannot even recognize their own bias? The researchers still think that education can be the best solution to alleviating racism and sexism, though the specific method of doing so is not conclusive. "It is thus possible that some solutions to contemporary prejudice may rely less on motivation and more on education," conclude the study's authors.

More like this
Biden's pledges aren't enough to avoid the worst effects of climate change, new study says
By AJ Dellinger
Remember the vaping crisis? Well, it hasn't gone anywhere
By Melissa Pandika
Could COVID-19 lead to erectile dysfunction?
By Melissa Pandika
Stay up to date