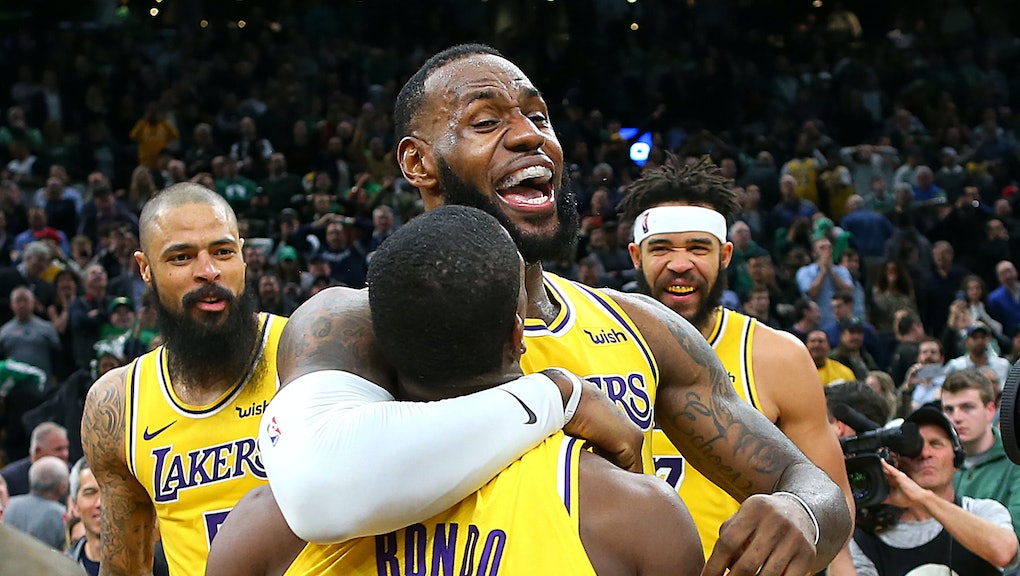 The NBA is banning hugs, because coronavirus

How do you get pro-athletes, used to smashing their sweaty bodies against other players then high-fiving and hugging and slapping each other’s butts when they score, to observe social-distancing? Turns out it’s pretty darn difficult. With the pandemic leading the cancellation of several games this week, the NBA told players it was stepping-up enforcement of its existing no-touching rules, deploying league security to keep athletes from hugging and shaking hands, according to a report in ESPN on Thursday.

Elsewhere in the sporting world, soccer leagues have asked players to avoid physical contact, though some have continued to celebrate their goals with group hugs and even choreography, according to the Wall Street Journal. Touch is an integral part of team building in most sports. But if leagues can’t keep athletes healthy, they won’t be able to keep playing, which is why they’re desperate for personnel to adhere to health and safety protocols.

But there’s some evidence that telling athletes not to hug or high-five their teammates could adversely affect their performance. A season-long study by the University of California charted physical contact in the NBA during the 2008–9 season, and their findings suggested that positive physical contact might help a team win.

"Touch predicts performance through fostering cooperation between teammates," Dacher Keltner, professor of social psychology at University of California Berkeley, told the Boston Globe in 2015. "You can communicate really important emotions like gratitude, compassion, love, and anger just through brief touches."

Keltner got his students to crunch the numbers. They found that the two teams that did the most touching (unrelated to game action) that season were Los Angeles and Boston. The Kobe Bryant-led Lakers had the second-best record in the league and won the championship. Boston had the third-best record, making into the second round of playoffs. All-Star (and future Uncut Gems star) Kevin Garnett, then playing for the Celtics, was the handsiest player in the league by far.

"Every team has talent, but the team that gets along the best and has each other's backs wins,'' former Celtic David Lee told the Globe in 2015. Ironically now, considering the pandemic, he added: "I think that stuff is contagious. You run into a timeout and the whole bench gets up and congratulates one another. That kind of stuff is what keeps the energy up during a game and a long season also."

But cheering and hugging one's teammates is also what keeps infection rates up, unfortunately. Until the pandemic is firmly in check, the high-fives will have to be touchless, and from six feet away.

More like this
How many times must victims relive their trauma in the Larry Nassar case?
By Chloe Stillwell
Colin Kaepernick's new Netflix documentary highlights the man behind the icon
By Keith Nelson Jr.
The 8 best reality shows you're not watching, but should be
By Brandon Yu
Stay up to date