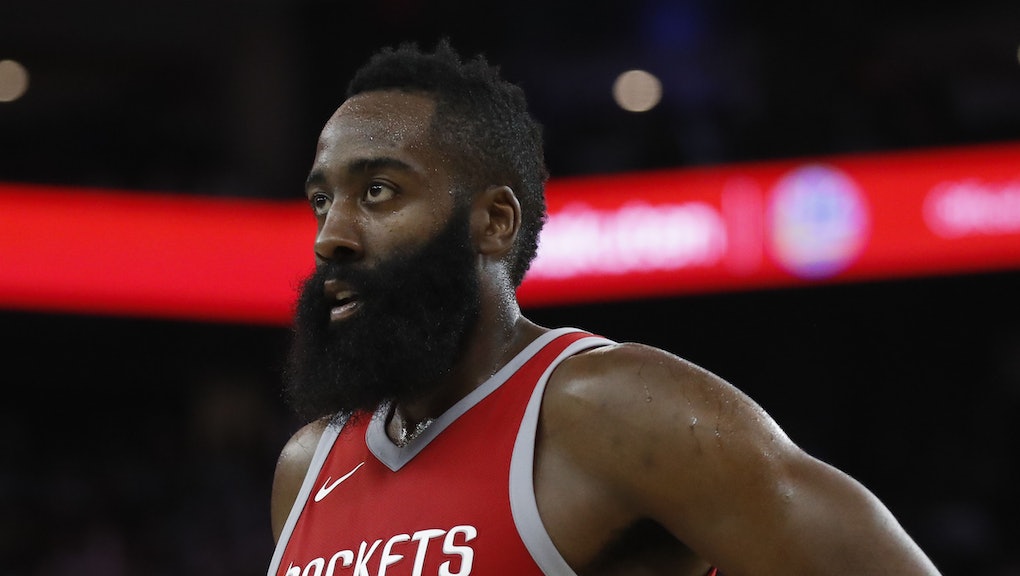 America, land of the free and the home of the brave! Unless you happen to disrespect the territorial sovereignty of the People’s Republic of China by expressing sympathy with the Hong Kong protest movement, in which case you’d better shut your mouth before you damage the business relationships your employer has been cultivating with the world’s leading autocratic regime. That's what we've learned from the NBA's China tweets mess, at least.

To recap: On Monday, Daryl Morey, the general manager of the Houston Rockets, tweeted a relatively mundane message: “Fight for freedom, stand with Hong Kong.” His tweet was a small gesture in support of pro-democracy protesters in the semi-autonomous region, who have been demonstrating for months to demand societal change from Beijing.

The backlash in China was swift and ferocious. Morey’s statement is anathema to the Chinese government, which is currently trying to suppress the protests in Hong Kong. It’s also objectionable to many of the mainland’s citizens, who share the government’s nationalist views. China’s national league, the Chinese Basketball Association, immediately announced an end to “exchanges and cooperation” with the Rockets, and the media giant Tencent Sports suspended broadcasts of Rockets games in China.

The New Yorker reported that Chinese internet users flooded Morey’s replies with the term “NMSL,” a Chinese term for “your mother is dead.” The Los Angeles Times reported that at the NBA exhibit in Beijing, bare spaces on the wall indicated where employees had removed all Rockets jerseys and memorabilia, including images of the former Rockets center Yao Ming in uniform. Hu Xijing, editor in chief of the Chinese newspaper the Global Times, tweeted that the Rockets organization “[needs] to avoid offending Chinese public” if it wants to “keep its Chinese market.”

Not all Chinese Rockets supporters have abandoned their team, though. One fan in China posted an image on social media of himself preparing to burn his country’s flag, with the caption: “I live and die with the team.” He was arrested by local police shortly thereafter.

The reaction in China is to be expected — the government routinely pushes back aggressively against critical comments and unflattering stories in Western media. In 2013, Chinese President Xi Jinping said that China “must pay attention to the shaping of our country’s national image,” using “newly emerging media to raise the creative strength, charisma, and credibility of our external discourse.”

What was a bit surprising, however, was the way China’s pushback was echoed by Morey’s boss, his league’s president, his players, other league officials, and eventually even Morey himself.

Tilman Fertitta, the owner of the Rockets, tweeted that Morey “does NOT speak for the [Rockets].” In its own statement, the NBA called Morey’s tweet “regrettable,” while making clear that “the values of the league support individuals’ educating themselves and share their views on matters important to them.” On Chinese social media, however, the NBA’s statement was more critical, saying, “We are extremely disappointed in the inappropriate remarks made by Houston Rockets general manager Daryl Morey.”

The two most prominent Rockets, guard James Harden and new acquisition Russell Westbrook, additionally offered a mea culpa to reporters ahead of a preseason game in Japan. “We apologize,” said Harden, who often visits China to promote his sneaker deal with Adidas. “You know, we love China. We love playing there.” Perhaps the strongest statement from anyone affiliated with the NBA came from Brooklyn Nets owner Joseph Tsai, a Taiwanese-Canadian billionaire who co-founded the massive Chinese company Alibaba Group, when he said that the Hong Kong protests amounted to a “separatist movement” and fiercely defended the “territorial integrity of China and the country’s sovereignty over her homeland.”

What feels icky about all of this is the transparent profit motive for the NBA to silence Morey. More than 600 million Chinese fans watched the 2017-2018 season of the NBA, and close to one-third of all NBA live-streaming subscriptions are in Asia. The Rockets are especially popular, as Yao played in Houston for eight years. In other words, a prominent American’s defense of pro-democracy protests in a foreign country was criticized by other Americans who don’t want to upset the dictatorship those protesters are fighting against, lest they lose access to that country’s massive market share.

But as Matt Yglesias at Vox pointed out, China’s restrictive attitudes on free speech have increasingly spread into the United States — an unsettling consequence of globalism. “Once upon a time, the American people were promised that the integration of China into the global economy would promote freedom and democracy there,” Yglesias wrote. “That promise has not been borne out. And the Rockets ownership and the NBA as a league are giving us a vision of the frightening possibility that the reverse will happen, and American capitalists’ eagerness to please the Chinese government will become a threat to freedom at home.”

The Soviet Union fell because America exported its political values along with its pop culture. But China has something the Soviets didn’t have — a massive economy of global importance. The First Amendment might not stand a chance.

The NBA isn’t alone in its craven posturing for Chinese riches, either. The Morey incident is just one of many that have recently underlined the global reach of Chinese censorship and shone a spotlight on the steps that companies have taken to bend the knee. Apple removed the Taiwanese flag emoji in a recent update to the iPhone’s operating system for users in Hong Kong and Macau; the emoji has been blocked for mainland Chinese users since 2017. The wildly popular Chinese-owned social network TikTok censors mentions of sensitive topics like Tiananmen Square or Tibetan independence. And earlier this week, the American gaming giant Activision Blizzard suspended a Hong Kong-based player at a tournament after he said “Liberate Hong Kong, revolution of our time” during a livestream.

"We are very angered and disappointed at what happened at the event and do not condone it in any way,” wrote Blizzard on Weibo, a popular social network in China. “We also highly object to the spreading of personal political beliefs in this manner. ... We will always respect and defend the pride of our country." Even private citizens in the U.S. have seen repercussions for speaking out, like the two basketball fans who were ejected from an exhibition game between the Philadelphia 76ers and the Guangzhou Loong Lions in Philadelphia due to their pro-Hong Kong messaging.

This week also saw South Park, a show famous for its free speech views, fall into the China vortex. The series was scrubbed wholesale from the internet in China after an episode called “Band in China” aired that focused on Chinese government censorship.

In a statement, South Park creators Trey Parker and Matt Stone quipped: “Like the NBA, we welcome Chinese censors into our homes and into our hearts.” It’s a joke, but the sentiment is real — we’re living in an era in which Chinese censorship, once something that only existed far beyond America’s supposedly First Amendment-protected shores, is increasingly chilling American speech.

More like this
The Norwegian women's handball team was fined for a sexist uniform rule that no one can explain
By Vanessa Taylor
Trump kept a Gitmo prisoner detained for 5 extra years. Biden has finally freed him
By Rafi Schwartz
The protests in Cuba are about much more than the current economic crisis
By Vanessa Taylor
Stay up to date