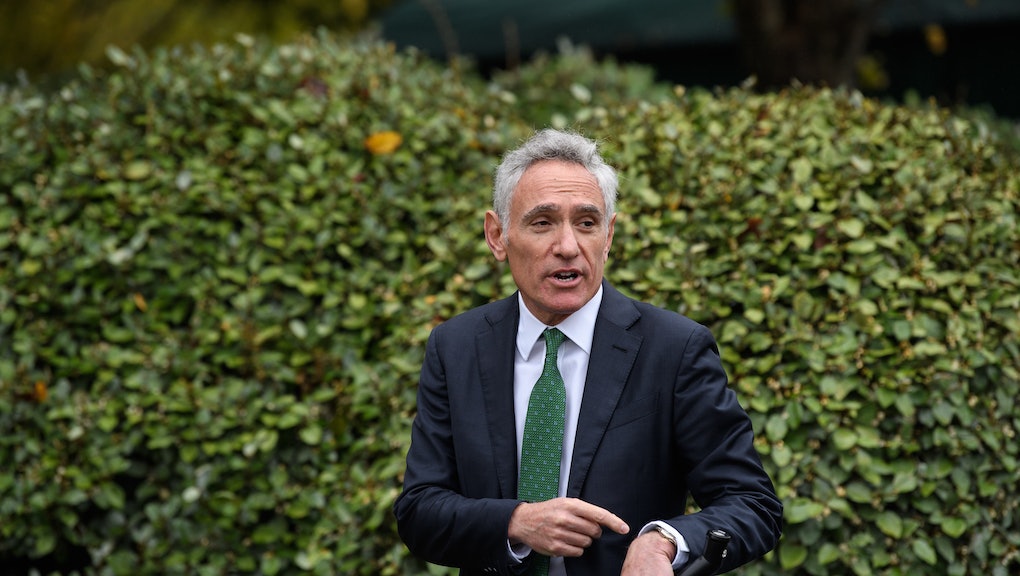 It's probably a bad sign when a premier educational institution is forced to release a terse emergency press release distancing itself from an associated academic's very public statements, made on cable news just hours earlier. That, however, is exactly what happened on Tuesday morning when Stanford University hastily put some much needed space between itself and Dr. Scott Atlas, President Trump's current favorite coronavirus task force adviser, after Atlas tweeted that Michigan residents should "rise up" against Democratic Gov. Gretchen Whitmer's latest pandemic mitigation measures.

Despite attempting to follow up his fairly unambiguous message by emphatically insisting he'd "NEVER!!" promote violence, Atlas — who, incidentally, specializes in neuroradiology and not infectious diseases — appeared on Fox News where he again urged viewers to ignore the sort of social distancing measures designed to stop the booming COVID-19 infection rates ahead of the upcoming Thanksgiving travel season from worsening.

"This kind of isolation is one of the unspoken tragedies of the elderly, who are now being told 'don't see your family at Thanksgiving,'" Atlas began. "For many people this is their final Thanksgiving, believe it or not."

If the Latin phrase "memento mori" serves to humble us by reminding everyone that we are all mortal, then Atlas's rush to justify potentially exposing one of the most at-risk populations to COVID-19 because, hey, they're gonna die anyway, should perhaps be labeled "memento moron" — as in remember, Scott, you're a moron.

And so we come back to Stanford University, where Atlas serves as faculty at the school's controversial, decidedly conservative Hoover Institute, where he is a senior fellow. After claiming it had been "asked to comment on recent statements made by Dr. Scott Atlas," Stanford made its position clear:

We support using masks, social distancing, and conducting surveillance and diagnostic testing. We also believe in the importance of strictly following the guidance of local and state health authorities.

Incredibly, Atlas's "hey, we're all gonna croak sometime, right?" appearance was not Fox News's only foray into justifying potentially killing your elderly relatives because you just gotta eat some cranberry sauce within spitting distance from them. On Tuesday, commentator Charles Payne picked up on the same thread Atlas had left laying on the Fox studio floor, and tugged.

"This Thanksgiving is when we need each other more than ever before," Payne exclaimed. "And the notion that you're gonna come to my house and count how many people are there, that is separation of families."

Considering how conservatives have used the phrase "separation of families" over the past few years, perhaps Payne sould reconsider his words before he says things on television.

Ultimately, yes, this Thanksgiving is going to be difficult — this whole year has been difficult. And, yes, if you usually spend time with your families and friends around this time of year, things are going to be sad, and depressing, and rough. But probably not as rough as watching a loved one die because you couldn't do the easiest thing on Earth and just stay away for a little while longer, despite what some conservatives seem to think.