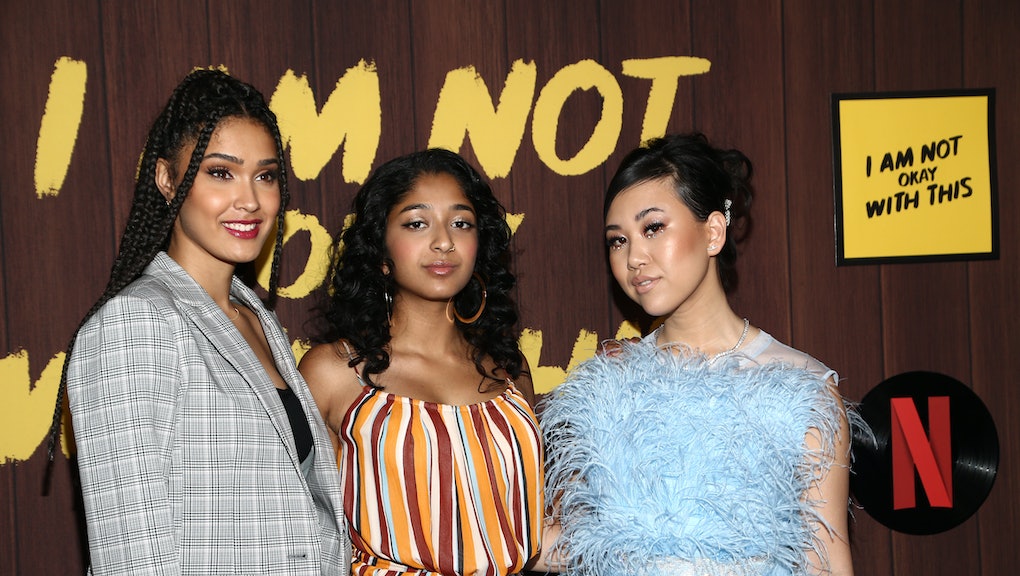 The moment feels startlingly, painfully familiar. In the fourth episode of the new season of Never Have I Ever, our charmingly hotheaded protagonist Devi is stopped in her tracks when she is faced by a horrifying sight: another Indian girl has arrived at her school. Worse yet, she looks pretty and cool. We see in Devi’s eyes, a complicated look: one of threatened panic, rooted in a sense of mutual identification.

The girl is a transfer student named Aneesa, a major new character in Mindy Kaling's Netflix comedy, which was wildly popular in its first season for its depiction of Indian-American adolescence that felt genuinely new in a way that also avoided being cloying, as has become the increasingly common pitfall for shows that overdo their purportedly groundbreaking perspectives. Part of this balance was achieved by the development of a much deeper, rather moving narrative — the undercurrent of grief that Devi (a delightfully precocious Maitreyi Ramakrishnan) was fighting in the wake of her father’s death — amid the high school dramatics.

This new season continues much of the debut's mixture of charm and poignancy, and also extends that freshness with another dimension: after Devi’s grandmother moves from India to America, the show becomes a window into an intergenerational household of Indian women. But, alongside her Ben-versus-Paxton competing boy romances and their requisite whirlwind of emotions, the major new storyline of the new season arrives in the face of the new girl, Aneesa (Megan Suri).

The tension Devi immediately feels is a reflection of a very specific phenomenon that is common to most people of color who have been surrounded by people that don’t look like you — the feeling of entering a classroom, or any room, in which there is just one or two “others” like you. The energy — an unusual mixture of wariness, of hostility, but also perhaps of comfort and warmth — that links you can be immediately palpable, even if others might not notice. In this case, others certainly do.

Immediately after introducing her, their woke-posturing teacher mixes Aneesa and Devi up, and Aneesa is thereafter referred to by a classmate as “Devi 2.0" (the comparison between the two continues throughout the season). While Aneesa speaks to the class, who immediately warms up to the new girl in school, Devi darts her head around in baffled terror. “Devi was in awe of this cool Indian teen,” the show’s narrator, John McEnroe says. “She had always assumed her unpopularity was because of racism, but this new kid was proving that Devi might just be objectively lame.”

It’s a funny joke that also distills a viscerally uncomfortable truth. Within this brief moment of sizing-up the one other Indian girl, there is a maelstrom of conflicting implications and emotions, from resentful admiration to a confusion of the innate racial dynamics of high school’s social hierarchies. How is it that this girl can bulldoze through the school upon arrival, piercing through the ceiling of popularity as an Indian girl, while Devi has rather faithfully accepted and cultivated her role as an archetypal high-achiever? Aneesa, Devi seems to think, isn't sticking to the script.

In reaction to this deviation, Devi lashes out defensively in the next scene. “Look how she’s sucking up to the popular kids,” Devi tells her friend Eleanor. “I get a self-hating Indian vibe from her. I bet she doesn’t have any Indian friends.” Neither does Devi, Eleanor points out. More truthfully, how much internalized racism is Aneesa’s sudden appearance and their skewed environment bringing out in Devi?

What follows between Devi and Aneesa, though, is not exactly a rivalry. Instead, the show more accurately captures a a stormy volatility toward Aneesa that consistently vibrates within Devi. After hating her, Devi comes to realize that Aneesa is a ready and willing friend — one that, unlike anybody else, can in fact empathize with her about, say, the kinds of restrictive behaviors of an Indian mother.

This kind of push-and-pull, perhaps the most impressively precise experience that the show has tackled, occurs repeatedly across the season: a bitterness toward Aneesa for what Devi feels is like a mirror of herself, followed by a sense of solidarity with the one person who innately knows her experience better than most, followed once again by another lurch into resentment. Things are exacerbated by the monumental stakes of teenage love, as Ben becomes involved and a love triangle begins to form. Eventually, things take a dark turn: in a moment of anger, Devi, in the cruelly offhanded way that only a teenager is capable of doing, says to a pair of classmates that Aneesa is anorexic, a rumor that spills through the school and is also, it turns out, inadvertently true.

“I never expected [Aneesa] to be stabbed in the back by the only other Indian girl in school,” Aneesa’s mother says in the aftermath. The sentiment feels right, and yet simultaneously the opposite — the fact that the only other Indian girl would actually be the most likely to do so — is also true. If it weren’t so tragic, if their entire arc wasn’t a knowing manifestation or catalyst for self-hatred that so often happens in spaces for young people of color, it might be seen as something warmly familiar instead — the way you can hate and love your sister from one moment to the next, or all at once, because that’s what you do when you see another version of yourself.

More like this
What could possibly explain Carrie Bradshaw shopping at Forever 21?
By Kara Weisenstein
Even 'Arthur' can't escape the cynical rules of modern entertainment
By Brandon Yu
A crisis PR firm dragged the Golden Globes for its discrimination. Will it listen?
By Brandon Yu
Stay up to date