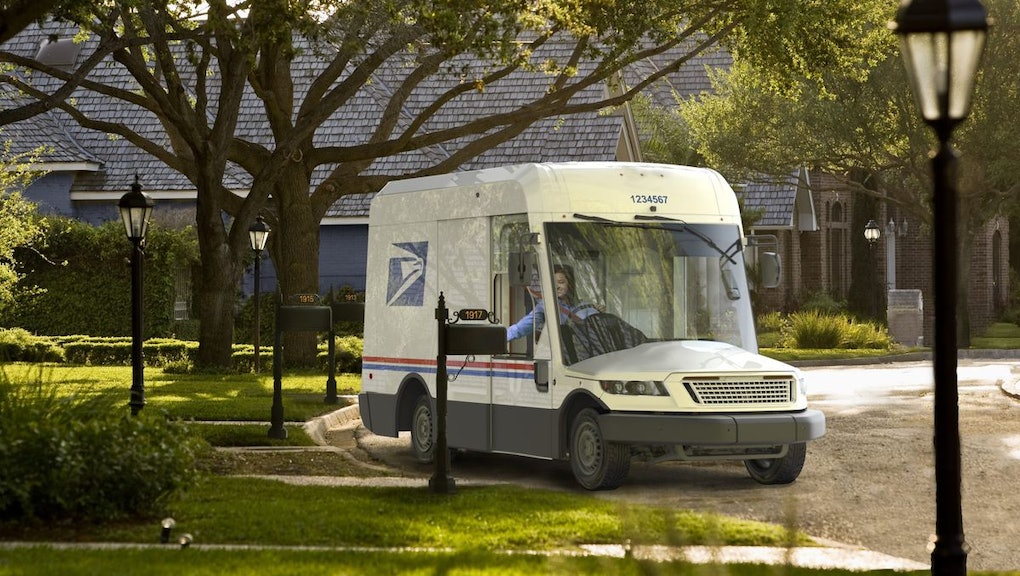 The new USPS mail truck is goofy as hell, but it might save lives

The lightweight, boxy U.S. Postal Service mail truck that you've grown accustomed to seeing drive up and down your street for the last 30 years is about to be replaced. On Tuesday, the USPS announced a long overdue makeover for its mail trucks, revealing a next-generation vehicle that will hit the roads starting in 2023.

The new van, manufactured by Oshkosh Defense, will get a massive overhaul that will provide some significant and desperately needed upgrades for the folks who ensure that "neither snow nor rain nor heat nor gloom" prevent your packages and letters from arriving on time. While the polygonal-like build and massive front windshield of the new truck have some wondering if the USPS stole Homer Simpon's car idea or perhaps tapped Pixar to do the design, it's what’s on the inside that is most interesting. Sure, there are high-tech advances like the inclusion of 360-degree cameras and front- and rear-collision avoidance, but postal workers will welcome one feature in particular: climate control.

It might come as a shock, but much of the current fleet of USPS trucks does not have air conditioning. The only reprieve currently available to drivers is to roll down the window or enjoy the minimal relief provided by a dashboard fan. That simply won't do in areas that suffer through excruciatingly hot summers, and it leaves the vehicles woefully unprepared for the increasing number of heat waves brought about by climate change. A number of postal workers have died or suffered serious injury due to heat exposure: A report from the Center for Public Integrity found that more than 900 postal workers suffered from heat hazards between 2012 and 2018. Since 2015, more than 100 mail couriers had to be hospitalized for heat-related illnesses. Since 2000, the Postal Service has added 63,000 vehicles with air conditioning to its fleet, but that still leaves the vast majority of its more than 230,000 vehicles without the simple luxury of climate control.

That's not the only problem with the current trucks. The model you're likely most familiar with, formally known as the Grumman Long Life Vehicle (LLV), has been on the road since 1987 and has long outlived its initial expected lifespan. The Grumman LLV was supposed to have a 20-year lifespan, but that was upped to 30 years in 2009. While the vehicles did the job admirably during that time, we're long past the point where the little boxes on wheels ought to be retired. Instead, with them still in circulation long after their initial intended lifespan, the overworked engines have started to catch fire and explode. More than 400 USPS mail trucks have exploded since 2014, according to a Vice report published last year.

Between the risk of driving a ticking bomb around, and doing it in historic heat waves without air conditioning, an updated truck is just about the least the federal government can do. Uncle Sam is hoping to squeeze a long life out of these new vehicles, too, equipping them with both gasoline and electric drivetrains to ensure they are prepared to transition to a fossil fuel-free future. It seems likely that the government will lean heavily into the electric option, as the vehicles won't hit the road until 2023 and President Biden recently expressed his interest in converting the entirety of the government's fleet of vehicles over to electric. That would have to include the USPS, which makes up about one-third of the government's fleet.

More like this
Amazon stomped out a unionization effort with allegedly "blatantly illegal" tactics
By AJ Dellinger
Amazon fired employees in retaliation for climate activism, the U.S. labor board says
By AJ Dellinger
Biden is going big on offshore wind — and it could create tens of thousands of new jobs
By AJ Dellinger
Stay up to date