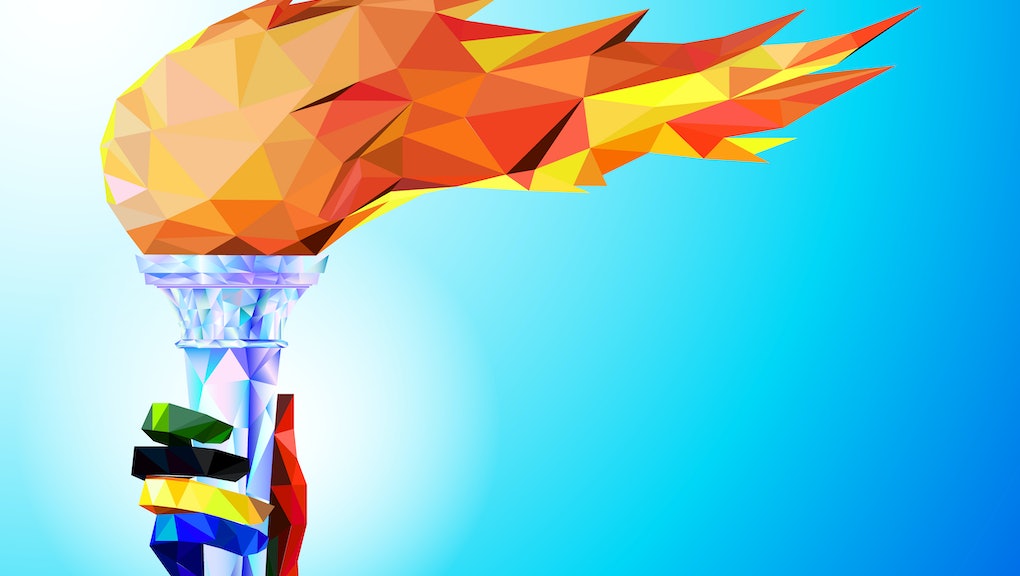 History is full of athletes using their platforms to support social movements like Colin Kaepernick taking a knee or Muhammad Ali refusing the draft. Now, though, it appears officials don't want to risk that happening at the Olympics. This week, the International Olympic Committee banned protests at the 2020 Tokyo Olympics.

Political demonstrations were already banned at the Olympics by Rule 50 of the International Olympic Charter. Part of what that rule says includes, "No kind of demonstration or political, religious, or racial propaganda is permitted in any Olympic sites, venues, or other arenas."

For many, that rule opened up more questions than it answered. What constitutes a demonstration? What is "political propaganda"? And most importantly, why are protests such an issue? To offer clarity, the IOC published athlete guidelines Thursday.

“It is a fundamental principle that sport is neutral and must be separate from political, religious, or any other type of interference,” the new guidelines state. “Specifically, the focus for the field of play and related ceremonies must be on celebrating athletes’ performance, and showcasing sport and its values.”

According to the guidelines, athletes who break the rules will face three rounds of disciplinary action — by the IOC, a sport’s governing body, and a national Olympic body. There is no single penalty because everything will be reviewed on a case-by-case basis.

Within recent years, the Olympics have seen athletes show support for civil rights struggles in their home countries. For example, Ethiopian runner Feyisa Lilesa crossed his wrists over his head as he ran across the finish line in 2016. Lilesa, who is a member of the Oromo ethnic group, did so to draw attention to the government's ongoing persecution of his people.

Then there's the cases of fencer Race Imboden and hammer-thrower Gwen Berry. In August, both were placed on probation by the U.S. Olympic and ParaOlympic Committee after drawing attention to social issues on the medal stand. Imboden knelt during the national anthem, while Berry raised a fist.

The guidelines released this week say they were developed so that competitors "can enjoy the experience of the Olympic Games without any divisive disruption." But referring to people calling attention to civil rights struggles, political persecution, and other issues as "divisive" is questionable at best.

The IOC clinging onto an idea that sports are fundamentally neutral is strange when nothing ever really is. In practice, the idea of neutrality often means siding with those in power because neutral generally means something that won't upset the status quo. This can be seen within the IOC's own history: Who can forget the iconic image of American sprinters Tommie Smith and John Carlos raising their gloved fists in the Black Power salute on the medal stand in 1968? It's an image ingrained in many people's memories, but most don't know what happened after the famous photograph.

As a result of their protest, Smith and Carlos were expelled from the Olympic Village. In 2018, new letters revealed that the athletes made their silent statement aware of that possibility, as then-head of the IOC Avery Brundage wrote two months before the opening ceremonies that he intended to "avoid any occurrences [that] will endanger the dignity of the Games."

It's a funny sentiment coming from Brundage, who served as the organization's president from 1952-1972. Before that, Brundage was involved with the IOC as a member beginning in 1936. That year, he was a big part of the push for the Olympic games to take place in Nazi Germany and permitted the Nazi salute to be used during those games.

The Olympics' possible pending reckoning with the role of sport in social justice additionally includes the burgeoning anti-Olympics movement. NOlympics LA, which protests the pending 2028 Olympic Games taking place in Los Angeles, is one such group that is calling attention to the Olympics' perpetuation of inequality, given its massive draw on local resources while issues like homelessness go unsolved. Other groups have made similar points about the immense financial strain that's put on a host city — only for the massive structures to go abandoned when the athletes clear out.

At the end of the day, athletes are human, and they come to the Olympics carrying political struggles with them. Host cities have existing residents who may not be so keen on a mass infiltration of athletes, media, and tourists for three weeks straight, let alone accepting of the idea of funding those trips via their taxpayer dollars. The Olympics are supposed to be the great global equalizer, and a respite from political bitterness. But it's worth asking who benefits from such a superficially imposed truce.

More like this
Watch GOP Gov. Jim Justice fully combust when asked why he signed a transphobic bill
By Rafi Schwartz
FEMA said it would reimburse cities for housing homeless people. Most cities ignored the offer
By AJ Dellinger
"Radical love in action": How organizers supported vulnerable Muslim communities during Ramadan
By Vanessa Taylor
Stay up to date