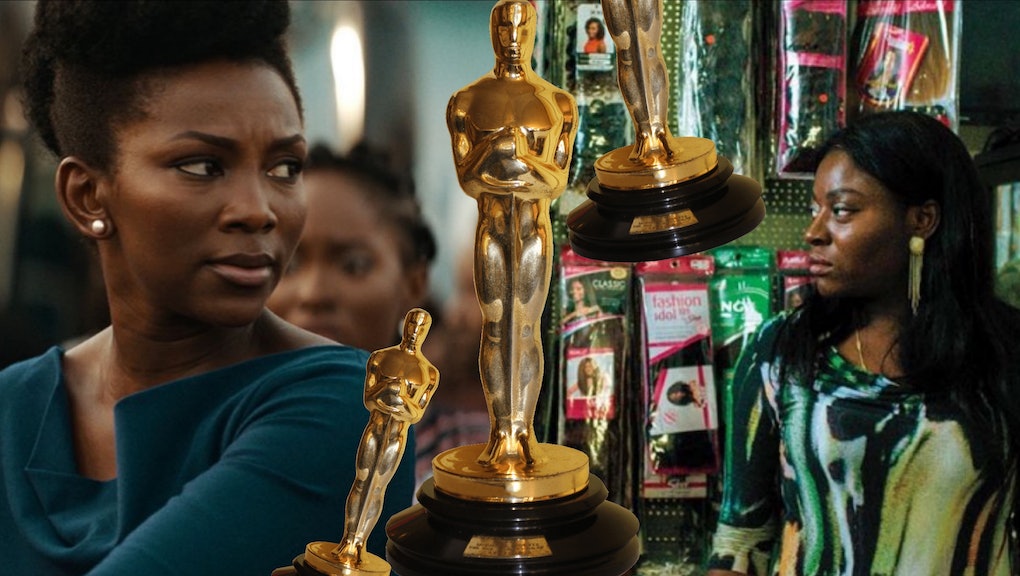 Stills from 'Lionheart' and 'Joy' courtesy Netflix and Freibeuter Film

The Oscars disqualified two foreign films for having too much English

Austria won’t be allowed to compete in the Oscars this year, according to an exclusive story by The Hollywood Reporter. The country’s entry, Joy, was disqualified by the Academy of Motion Picture Arts and Sciences because “only 33% of the dialogue is non-English.”

The same thing happened to Nigeria’s best international feature film contender, Lionheart, last week. The Academy “discovered that Lionheart includes only 11 minutes of non-English dialogue, which makes it ineligible for this award category,” it said in a statement.

The international feature competition works differently from the rest of the Oscars. Each country in the world is invited to submit one film apiece for consideration, like the cinematic Olympics. There are usually government committees and cultural entities that pick the films, which has obvious drawbacks for filmmakers from countries with restrictive regimes, for example.

To be eligible for the rest of the Academy Awards, a film has to have at least a week-long run at a movie theater in Los Angeles County. And that short screening window has been the subject of controversy lately, with Netflix and other streaming giants emerging as major Oscar contenders. Backers like Netflix, who have deep pockets and an appetite for experimental content, also represent many international and indie filmmakers’ best chance at global distribution and awards consideration.

This past April, the Academy changed the name of the award from “best foreign-language film” to “best international feature film” in a stab at cultural awareness. "We have noted that the reference to 'foreign' is outdated within the global filmmaking community," International Feature Film Committee co-chairs Larry Karaszewski and Diane Weyermann said in a statement.

What the name-change didn’t address was the Academy’s eligibility rules for the category, which stipulate that international films have to have a “predominantly non-English dialogue track.” This logic doesn’t square — at the very least, it proves the Academy needs an international studies refresher.

The Lionheart decision was swiftly condemned by filmmaker and star Genevieve Nnaji, who tweeted, "This movie represents the way we speak as Nigerians. This includes English which acts as a bridge between the 500+ languages spoken in our country. [...] It’s no different to how French connects communities in former French colonies. We did not choose who colonized us.”

Director Ava DuVernay, an Oscar nominee for her 2017 documentary 13th, backed her up: “To @TheAcademy, you disqualified Nigeria’s first-ever submission for Best International Feature because its in English. But English is the official language of Nigeria. Are you barring this country from ever competing for an Oscar in its official language?”

As the Academy evidently stands to learn, it’s not just the film industry that’s rapidly globalizing, with the help of Netflix and all the other entertainment distribution platforms on the internet. Language belonging to one nation or another is an increasingly outdated concept. Walk down any sidewalk in New York City if you want proof. My roommates speak Italian and Spanish. My neighbors speak Yiddish. If any of them made a movie and submitted it for Oscars consideration, that’d be considered an American film, would it not? Sadly, no foreign language film has ever won best picture, and just nine have been nominated. Last year Roma came close to shifting that paradigm.

The Academy’s restrictive rules dictating what makes a movie international enough, or what makes a film a “serious” Oscar contender, are outdated. Heck, the Oscars themselves are tired. The Academy’s actions also dovetail strangely with the Hollywood establishment’s efforts to thwart Netflix and other entities looking to make film more accessible to audiences and creatives around the world. At this moment, when celebrities are finally taking a stand for diversity and inclusion in Hollywood, it makes no sense to limit visionary international artists, just because the words spoken onscreen aren’t “foreign” enough.