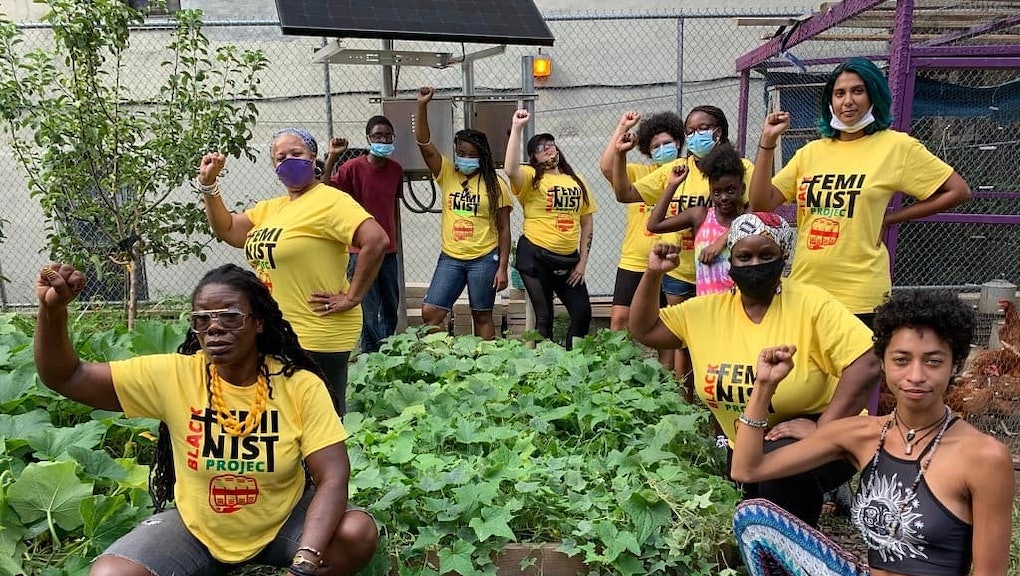 Contracting coronavirus didn’t deter Tanya Denise Fields, a 39-year-old mother of six, from her mission: to help other Black families in the Bronx survive the pandemic. Amid a global health crisis and a time of civil unrest across the nation, Fields, founder of The Black Feminist Project, pivoted her regular food justice programming into the creation and distribution of the “Corona Relief Food Box,” which serves New York families with a weekly groceries tailored to their family size, free-of-cost.

The movement began back in April, when Fields was fatigued and depressed. As she laid in bed sick with coronavirus for three straight weeks, she also felt a deep sense of guilt. “I looked at it as a personal failure,” the community organizer told Mic. “I felt a lot of shame. I felt I let my community down.”

In those moments, to Fields, COVID-19 had won the battle; she was wrong in so many ways. In the eyes of her community, she not only beat the virus, but also leveled up by making sure others didn’t go without food.

The coronavirus pandemic has jerked the entire world into a hunger crisis. And while much of the world considers the U.S. a financially sound country, our existing food insecurity ballooned during the past summer. One thing a lot of people don’t know, however, is that this problem was especially challenging for single mothers. In fact, single parent households are two-and-a-half times more likely to face food insecurity, according to Feeding America, a nonprofit organization of food banks.

In the Bronx, almost 87% of kids rely on free or reduced-price meals at school. With the summer break and the pivot to online classes, the hunger crisis in young people is only exacerbated. New York City’s food insecurity rate is 12% higher than the U.S. national rate, with 16% of Bronx residents living in households that lack reliable access to affordable and nutritious food. In this way, coronavirus shed light on some of the inequities that exist in working class and underserved neighborhoods.

All of this sparked something powerful in Fields. As soon as she recovered, she threw herself into work. Fields knew how fortunate she was to get her strength back; not all members of her community can say the same. The Bronx, the poorest borough in New York City and where Fields lives, has had some of the highest death rates from coronavirus. And in the spring into summer, Black and Latino residents died at about twice the rate of white people, data shows.

Fields’s first batch of Corona Relief Food Boxes was materialized in part thanks to a 2018 GoFundMe that hadn’t received much support until someone resurfaced it online. The Black Lives Matter movement had suddenly made her 10-year-long social justice work more relevant than ever, creating the perfect scenario for people to learn about her on a national scale. She updated the cause, and her organization raised $30,000 overnight.

Fields tells Mic that fundraising was successful in part because people, regardless of their location, age, race or ethnicity, resonated with her mission now more than ever: to provide healthy food, free of charge, in the midst of a pandemic and unemployment crisis. There seemed to be a heightened sense of empathy. People who contributed today might not need the extra food but in the current state of uncertainty, they could need it next week.

What’s in Fields’s boxes is important to note, too. Donated pantry boxes have historically been known to be stigmatizing, community members have told her. Unhealthy and unsubstantial food would have sent a message that the people who need a little help aren’t worth nourishment and nurturing. The boxes Fields distributes include fresh vegetables and fruit, fish, quinoa and, even jars of fresh pesto and berry jam made by her.

Underserved communities in food deserts (some of the most vulnerable families during the pandemic) have little to no access to produce and other essential food items. Field wanted to bridge that gap. By giving the community fresh, thoughtful, and high quality products, she’s sharing a direct message: You deserve good things. She calls it the “community’s version of Blue Apron.”

Up to 70 families received a food box during the first call-out on June 12th, and now they’re up to 100 families every week. The program works with a pay-what-you-can model where those who are able donate anywhere from $1 to $60 for their own box or someone else’s. The community aspect of Fields’s movement have been integral to addressing underlying health issues for families in the Bronx.

“Some of these underserved communities have high instances of diabetes, heart disease, obesity, high cholesterol,” says Micah M. Griffin, director of health programs at City University of New York. When you don’t have access to the things that can prevent these chronic diseases — healthy, affordable food; ample and accessible gyms; and access to quality healthcare — it creates the conditions that lead to higher risk factors of an individual contracting coronavirus, she adds.

Fields's impact goes far beyond providing groceries. She’s not only influencing the present but also the future quality of Black and brown lives. For example, Ysanet Batista, founder of Woke Foods, is serving the Bronx community by providing 100 hot meals a week at a local church alongside her two female co-op partners and The North Bronx Collective who distributes the plant-based meals.

Like Fields, Batista is hyperaware of how "charity" food donations are lacking, to say the least. “I’ve seen the meals the city is giving and they're mad whack. Our meals are delicious,” Batista tells Mic. “We curate a whole-ass menu. It’s mangú. It’s yuca, eggs, and homemade sauces.”

Batista and Fields want everyone who receives their food to feel comforted, nourished, and energetic. But most importantly, she wants to reinforce the value of her community. “I think in communities where we’re often told that we are not valuable, that we are a burden, that we are lazy or that we are the reason for all we are suffering from," says Fields. She aims to crush that myth and empower people, particularly in this political and economic crisis.

Both The Black Feminist Project’s “Corona Relief Food Box” and Woke Foods’ “COVID-19 Meal Supply” serve as lifelines during an unprecedented time, especially for Black and brown individuals who’ve lost their job or been furloughed because of the pandemic.

“Policies and the government ain't going to save us,” Fields says. She hopes to see initiatives like hers crop up more across the U.S., which is why her organization provides some funding for Black women doing the work in other communities.

The work of both Batista and Fields serves as a model for what can be done, even with modest resources (but, to be fair, a fierce and uncrushable spirit). “On the surface, it may look like you're just providing food but actually you're helping people with their mental health issues too,” Griffin says. “When you have to pick between paying rent, buying food and not contracting the virus, even though those are all physical elements, your levels of stress, anxiety, and depression can build up.”