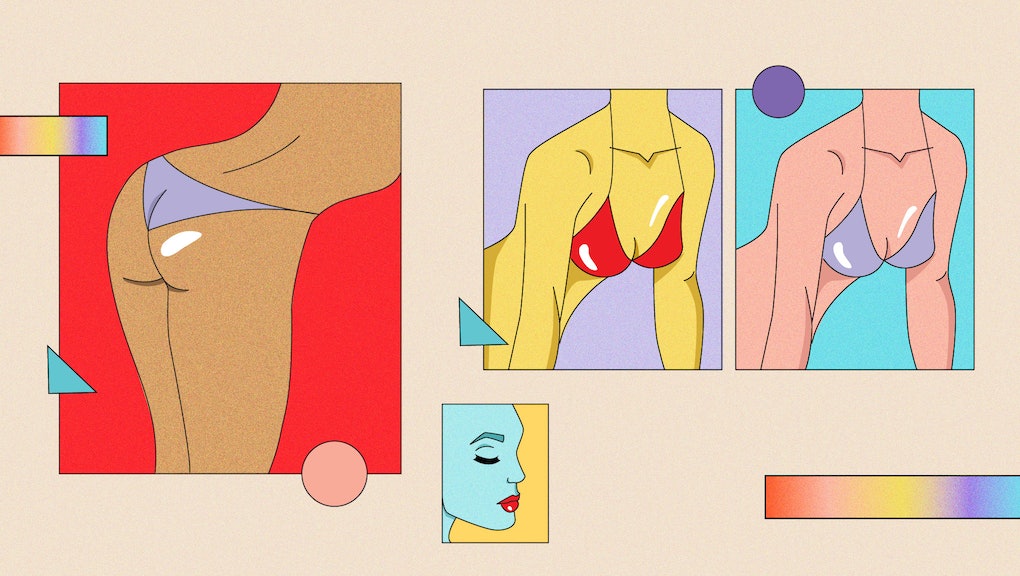 In the summer of 2020, with schools shuttered for months, unemployment reaching record highs, and protests over racial inequality flooding the streets, a quiet wave of women chose to put their priorities behind them and pursue their lifelong dream of a Brazilian butt lift.

“I actually booked more surgeries that April than I probably ever had,” says William Rahal, a Beverly Hills-based plastic surgeon known for his signature procedure — the "360 liposuction with Brazilian Butt Lift," which is essentially a refined lipo-Brazilian butt lift combo. “The demand was huge, so I completely filled up for six months. I’m booked out for a year now. It exploded.” The Brazilian butt lift procedure, for those unfamiliar, entails taking a patient’s own fat cells from an undesired area like the abdomen or thighs and transferring it to the posterior for a perkier, heart-shaped rear end. This ideally achieves the desired hourglass effect for those in search of a lean waist and bountiful booty.

The pandemic affected Rahal’s work in a curious way; he was forced to close his Beverly Hills office for two months following the initial California lockdown, but continued doing online consultations. When he reopened, he was faced with a sea of needy guts and butts. “This [pandemic] served as a kind of catalyst or impetus to say ‘You know what? It’s me time.’ It’s kind of YOLO. I’ve had that word mentioned to me,” Rahal tells Mic. “Recently a patient told me, and it kind of stuck with me because it was a powerful statement, she said ‘You’re giving me a second chance at life’ and I was like ‘Oh wow.’ It’s kind of like a rebirth.”

A rebirth, indeed. From what Rahal describes, it appears that many of his clients began considering procedures once they realized they’d have the time and space to heal afterward. And imagine, re-emerging from the trauma of a devastating pandemic with a body that might make you feel a little better about life. He says most of his patients are pursuing body sculpting surgery for the first time, and they have very specific ideas about what they want their new body to look like. For better or worse, he’s seen a trend in patients using a variety of body-morphing apps on their phone to design their dream body. “Some patients walk in and say ‘This is how I’ve morphed myself. This is how I edit myself. Can you make me look like this edit?’

While many patients flocked to facial surgeons after being forced to look at their own reflection on Zoom this past year, an even bigger story was happening out of frame below the neckline where thousands of bodies were healing from a bevy of breast augmentations, liposuction, labiaplasty, and of course — the BBLs.

On Manhattan’s Upper East Side, plastic surgeon Ryan Neinstein made an immediate shift to digital consultations when his office was forced to close due to COVID-19 restrictions. After four months in lockdown, Neinstein’s office reopened with a massive backlog of appointments. He says since his office reopened, last summer, the traffic has never let up and travel restrictions haven’t stopped a throng of international patients from flocking to NYC in search of gluteal nirvana. “We have a full floor of the Pierre Hotel filled, seven days a week, with international patients,” Neinstein says. “Yesterday I operated on someone from India, Serbia, France, and California.”

Neinstein attributes the bodysculpting and fat transfer booms, in part, to high-end professionals finally getting their butts out of the board room. “People could have large operations and be on a zoom call the next day and no one would be the wiser,” he tells Mic. “The amount of midtown lawyers, financiers, and doctors who never had time out of the office has been a pretty dynamic paradigm shift. Lawyers were never able to come, and now we can do 5-10 lawyers a week.”

But it wasn’t just overworked lawyers pursuing surgical rebuttal. “I’ve done two celebrities this week, with my athletic Brazilian butt lift,” says Neinstein. “We’re doing everyone from housewives in the suburbs to Housewives of Beverly Hills. It’s everybody.”

The increase in body surgery has also been attributed, in part, to a shift in finances. While millions of Americans slipped below the poverty line, those with disposable income and liquid credit lines had big bucks to spare thanks to cancelled vacations and other rich people shenanigans. Neinstein’s website features a chatbot that counsels out users whose liposculpting budget is less than $8,500 and redirects to a pricing web page that estimates the cost of post-pregnancy abdominal and waist contouring somewhere between $12,000-17,000.

Having more recovery time at home and more money to spare were only pieces of the posterior picture. Both Neinstein and Rahal emphasized that the pandemic body surgery craze was about more than a physical transformation. It was also a psychological and spiritual transformation for those looking to emerge from the pandemic feeling different, both inside and out. “A lot of people feel like they’re going to have a fresh start — almost like the game has restarted and they want to come out as the best version of themselves,” says Neinstein.

“There’s so much more stuff happening than the physical transformation. There’s a lot of spiritual change at the soul of plastic surgery,” Rahal adds. “Ultimately, it’s the confidence, the self-esteem, the internal mood that changes how a person experiences their life. It empowers women [especially].”

Look, after more than a year of isolation, social distancing and mask mandates, economic uncertainty, and the deaths of 600,000 Americans, our collective need to just feel better is totally justifiable — and sometimes, that means a body-enhancing shortcut. And honestly, it’s perfectly acceptable to admit that alongside frontliners and the vaccine, having the best ass possible saved people too.

This article was originally published on May 20, 2021

More like this
The benefits of liquid chlorophyll, explained
By Melissa Pandika
Grinding your teeth? Pandemic stress might be to blame
By Melissa Pandika
These adorable COVID-sniffing dogs are pandemic heroes — but there’s a catch
By Tracey Anne Duncan
Stay up to date