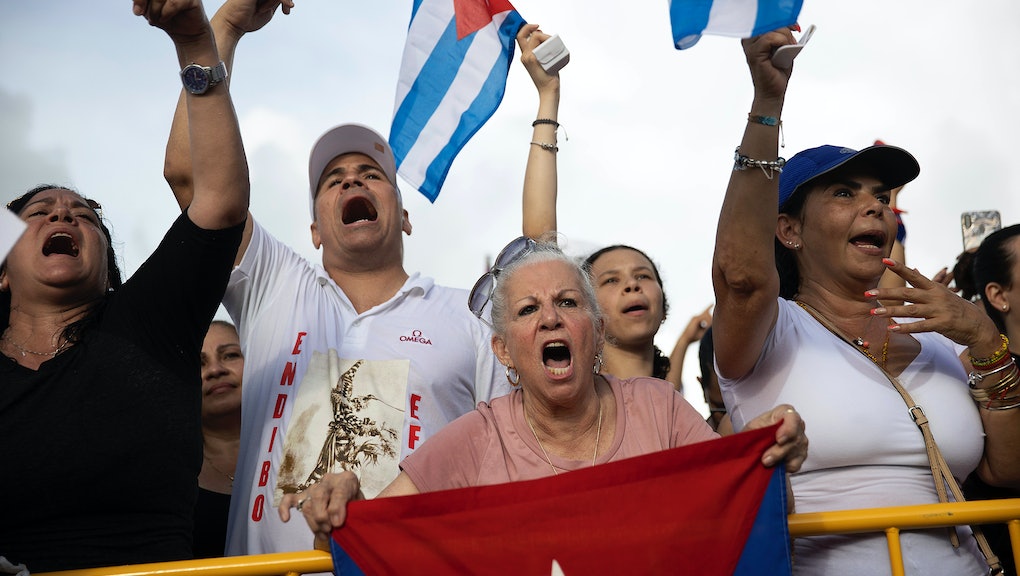 Over the weekend, a series of protests that spread throughout Cuba captured global attention. In the United States, the Cuban protests have especially caught the interests of Republicans like Mitch McConnell and Ted Cruz. But while some conservatives are taking the events as an opportunity to once again rage against communism, the reality is they're missing the role that the United States played in promoting civil unrest in the country.

Cuban protests began on Sunday in San Antonio de los Baños, a town located outside of the capital city of Havana. From there, the protests spread through several towns, with France24 reporting that protesters chanted "Down with the dictatorship" and "We want liberty" as they marched.

Part of the protests had to do with dire living situations in Cuba, as the country faces its worse economic crisis following the collapse of the Soviet Union. The Washington Post reported food shortages, blackouts, and a spike in COVID-19 cases, with daily cases now over 6,000. The outlet also reported that as people took to the streets to protest, they were met with violence by police.

Of the protests, Alfredo Martínez Ramírez, a 29-year-old civil engineer and activist, told the Post, "It was the moment so many of us had waited for. There were people who were not political, not intellectuals. The marginalized. People from different social classes. Everyone, just desperate, just fed up, standing together and screaming for freedom. Because the people are hungry, and they have lost their fear."

Since the weekend, many U.S. politicians have been vocal about their support for Cuban protests, including President Biden. In a statement, Biden said, "We stand with the Cuban people and their clarion call for freedom and relief from the tragic grip of the pandemic and from the decades of repression and economic suffering to which they have been subjected by Cuba's authoritarian regime."

"The Cuban people are bravely asserting fundamental and universal rights," Biden continued. "Those rights, including the right of peaceful protest and the right to freely determine their own future, must be respected."

However, these words of support are a bit ironic coming from Biden. While he promised during his 2020 presidential campaign to roll back former President Donald Trump's sanctions on Cuba, he hasn't done so yet. And as the U.S. scrambles to once again reignite the Red Scare, this points to exactly what so many politicians and media outlets alike are hoping to ignore about the island.

Economic crises don't just come out of nowhere. With Cuba, it's important to understand the role of anti-communist sentiments, and how global imperial forces like the U.S. use policies to essentially punish other countries for having politics they don't like. We've seen it time and time again, with the U.S. supporting right-wing coups throughout Latin America after a late 1990s shift in the region towards left-wing politics — a time generally referred to as the "pink tide".

In the case of Cuba, the U.S. utilized embargoes and sanctions to pressure the nation into complicity. Because it's an island, Cuba needs to trade with other countries to meet the needs of its population. But when Fidel Castro became prime minister of Cuba, then-President John F. Kennedy responded with an embargo on trade between the U.S. and Cuba that remains in place today. In 2017, Trump reversed his predecessor's relaxation on relations with Cuba, issuing new restrictions on travel and business with the country.

When looking at protests in other countries, it's important to consider what the U.S. has at stake, and why it backs certain narratives. To be clear, this isn't to say that people in Cuba have nothing to protest about. Instead, it's a reminder that these protests cannot simply be framed as a result of the ills of communism. That logic reeks of U.S. propaganda because it demands that the actions of capitalist nations, which have tried to ensure Cuban suffering through embargoes and sanctions, are ignored.

As Cienfuegos Distro, a Miami-based collective, wrote in a statement, "This tin pot dictatorship is owned and controlled by an entrenched military leadership and party bureaucrats. Between the U.S. government's economic blockade on Cuba and their corrupt government — the Cuban people have finally had enough."

"Real power and freedom for the Cuban working class will not come from foreign, and especially U.S., intervention. Anyone with the most basic understanding of Cuban history knows that," the collective continued. "Liberation, and the power to achieve it, will always flow from the bottom upwards. It flows from the working masses of the Cuban people and their revolutionary courage."