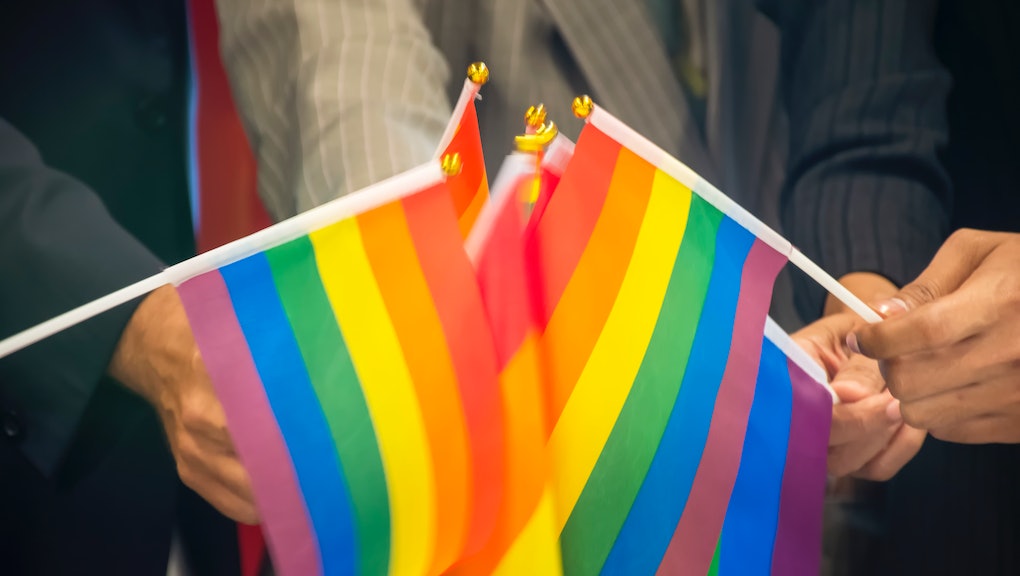 The Proud Boys got their hashtag stolen by adorable gay couples

The Proud Boys have been absolutely giddy since the first presidential debate on Tuesday. The far-right, neo-fascist, white nationalist organization got a special shout out on national TV from the president, when he told the group to "stand back and stand by," rather than to stand down or, preferably, fuck off.

But while Trump may be unable to distance himself from the hate group, the Proud Boys found themselves distanced from their own hashtag on Twitter over the weekend. Instead of allowing the white supremacists to chatter to one another, LGBTQ+ couples, particularly gay men, flooded the hashtag #ProudBoys with pictures of themselves, their families, and their loving and accepting communities.

The movement to hijack the hashtag appears to have been led by actor George Takei, who tweeted on Thursday, "What if gay guys took pictures of themselves making out with each other or doing very gay things, then tagged themselves with #ProudBoys. I bet it would mess them up real bad." The idea picked up steam right away, with Takei's replies getting flooded with photos of happy gay couples. Over the weekend, it briefly took over Twitter, racking up thousands of tweets and making #ProudBoys trend in the United States. The result, at least for a little while, was turning one of the public-facing organizing points of the Proud Boys into a place filled with a different kind of pride; one based in love rather than hate.

The Proud Boys claimed to be unbothered by the trend. According to CNN, the group's leader, Enrique Tarrio, said of the trend, "This isn't something that's offensive to us. It's not an insult. We aren't homophobic." Tarrio, who also leads the organization Latinos for Trump, said that "they're trying to drown out our supporters, they're trying to silence us," but claimed, "I think it's hysterical." You see, they aren't mad at all! In fact, they're actually laughing.

It's a good thing that Tarrio and his band of neo-fascists were cool with the LGBTQ+ takeover, because the trend ran through the weekend. Even George Takei took a brief victory lap, posting a picture of himself and his husband. The couple has been married for 12 years, and like many of the other lovely gay couples who contributed their pictures to the trend, they are a couple of very proud boys.