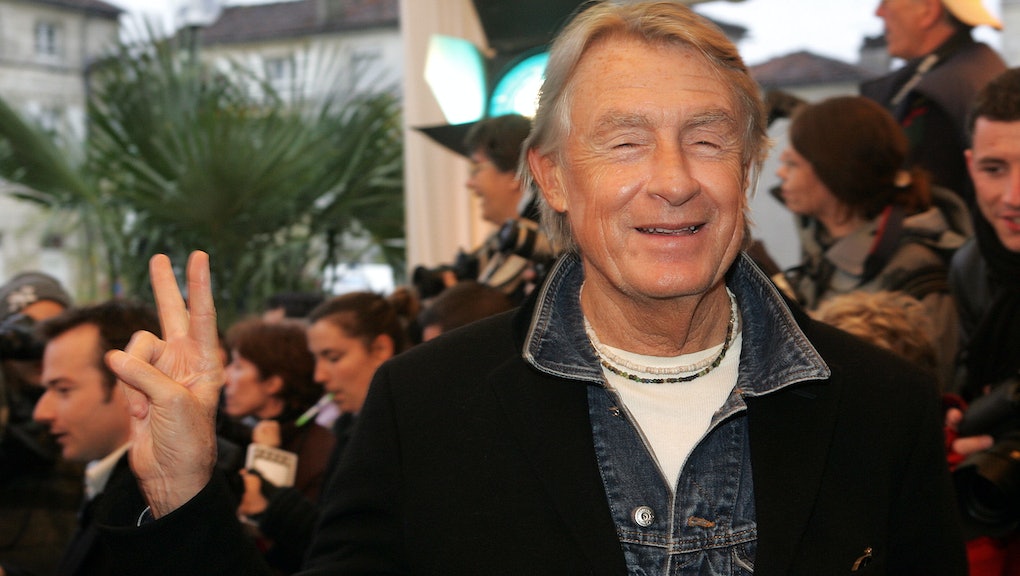 Endurance is a necessary ingredient of queer life. Demanding it is like salt in a wound; employing it is like salt in a dish, vital. It might be why director Joel Schumacher, who passed away on June 22 at age 80 after a year-long battle with cancer, was always able to weather bad reviews, poor box office numbers, and the cold shoulder that Hollywood tends to deliver to artists who underperform.

But what does it mean to be gay in Hollywood? Schumacher never seemed to care. And neither did we. His most successful period ran parallel to New Queer Cinema, when a wave of queer-themed stories took hold of the 1990s American independent film scene — a movement Schumacher had no particular stake in. For the nearly fifty years of his career, he was a filmmaker whose work and sense of self seemed almost entirely devoid of politics. This isn’t to say he didn’t have a political body. Nobody who came of age when New York practiced anti-sodomy laws, entered adulthood during the chaos of the early 70s, who whethered the AIDS crisis and lived to tell the tale, has ever existed in America without being defined, at least abstractly, by politics. But if it was coursing through him, it certainly wasn’t in his films.

Schumacher’s existence as a filmmaker was always more transgrassive than it was progressive. Today, it boggles the mind that Hollywood handed over the keys to the multimillion-dollar Batman franchise to an openly gay filmmaker with hardly a murmur. Present-day Hollywood is eager to find artists with a political praxis fine-tuned enough to bode nicely for the studio in question. But the relative indifference to Schumacher’s identity feels both antiquated and strangely utopic.

Political gymnastics would force a gay reading on his films, should that be of interest. The vampiric Lost Boys are leather clad and living on the fringe, sensitive to daylight, cruising local woods. The titular Phone Booth is a glass closet. Is there use in projecting queer ideology on Schumacher’s filmmaking? Perhaps, if that should move you, though Schumacher would likely find that reading to be bourgeois intellectualism at best and pigeonholing at worse.

But it’s his run on Batman that will be one of his most lasting cultural contributions. Batman Forever, which celebrated its 25th anniversary earlier this month, at the intersection of both gay pride and his untimely passing, was his first foray into major blockbuster filmmaking, followed by 1997’s Batman & Robin — and was for many his undoing. But jokes about batnipples or the inherent queerness of his vision always had the tone of sardonic observation, as opposed to the legitimate fingerprint of a gay filmmaker.. However conscious or unconscious the queer touch of his deft hand was, the film bares his architecture in its love of flamboyance and style, all of which are fundamentals of the Batman mythos itself.

Rejecting Schumaker’s take on Batman point-blank has always required a bit of historical revisionism. Camp is well-documented within the canon, and not without a century’s worth of precedent. We’ve spent the better part of a decade celebrating the relatively antiseptic style bible that governs the Marvel Cinematic Universe, a feat of business savvy and content distribution disguised as a filmmaking apparatus. Schumacher’s take on Batman was unique, and even with a 50/50 return value, I would take a divisive interpretation over coherent sterilization any day.

Hollywood’s obsession with virtue signaling has put it in hot water more often than not. Meanwhile, Schumacher’s existence in the studio system was in and of itself progress largely by virtue of anonymity. His queerness never sat central to the projects he was drawn to, but it was intrinsic. They had no interest in anxiety or paranoia, the specter of death, or the bliss of gay life. Schumacher was radical for doing what we, as marginalized people, are always most eager to do: The work. With little to no pretense.

And that work is remarkably varied. As a screenwriter, he penned two 1976 cult classics, Sparkle and Car Wash, as well as 1978’s The Wiz. As a director, he gave us two titanic ‘80s classics, 1985’s St. Elmo’s Fire and 1987’s The Lost Boys, both films with indomitable casts (the former, a Brat Pack staple; the latter birthing the Coreys). He helmed two of the best John Grisham adaptations put to film, 1994’s The Client and 1996’s A Time To Kill. 1993’s Falling Down feels like a preamble to the ‘94 LA Riots, a film that simmers with white rage while turning a blind eye to the actual tensions that defined Los Angeles during that very same period. And in between, he launched careers: Keifer Sutherland, Julia Robets, Colin Farrel.

But as tends to be the case, Schumacher’s Hollywood leverage was only ever as good as his last hit. He never ascended to the upper-echelon of filmmaking, but appreciating his work doesn’t require informing it with undue brilliance. Genius is highly sought after, yet the majority of films made by studios don’t require the graceful hand of a wunderkind. They require someone competent enough to do the work. The idea that our queer artists, female artists, filmmakers of color, need to be celebrated as geniuses creates yet another barrier for entry. In actuality, you’re lucky if you encounter one genius in your lifetime. The potential for progress is almost entirely contingent on our embrace of mediocrity and capability. Schumacher wasn’t a genius, but his artistry was that he was capable. And the result is a filmography now at its completion, that touches more genres that we might remember.

Marginalized people are always unlearning a penchant to over-apologize. For taking up space, speaking out, apologizing for being in places they have no business being. Schumacher rarely did, but a man with manners he was nevertheless. “If anyone went into Batman & Robin with great anticipation, and I disappointed them in any way, I really want to apologize,” he said in a 2005 interview. Schumacher was always blessed with good humor. His love of gossip is well documented, but he was also a Hollywood player who knew how to be good natured. “It was not my intention [to disappoint].” His intention, he says, was merely to entertain. He’s sincere, but after a pause, he smiles coyly, waving his hand with theatrical ambivalence, “and I mean it. I am so sorry.”

More like this
Queer in the country: How rural life is helping some LGBTQ Americans thrive
By Christopher T. Conner
'Exterminate All the Brutes' is a messy, ambitious documentary that ties together genocide, white supremacy, colonialism ... and Josh Hartnett?
By Nicholas Russell
'The Nevers' will be so much better when Joss Whedon has nothing to do with it
By Kara Weisenstein
Stay up to date