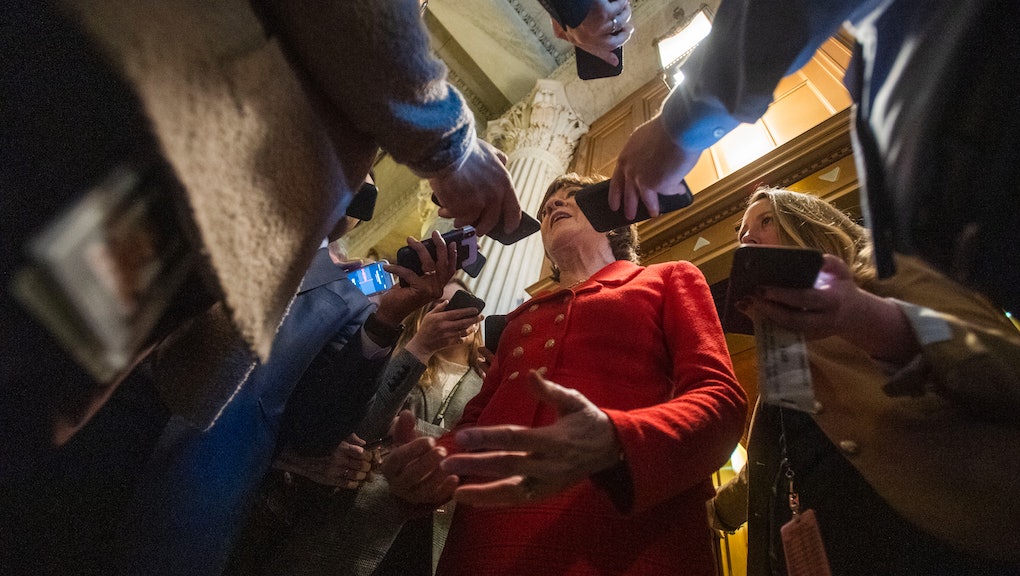 The race for the Senate depends on these contests

When it comes to the political balance of power, the race for control of the Senate is almost as important as the race for the White House. The Senate has control over all-important judicial appointments, and a majority in the upper chamber can be used to block an opposing president from achieving any of their agenda, as Senate Majority Leader Mitch McConnell notably did to President Barack Obama in the last years of his presidency. If Joe Biden wins the White House for Democratis but fails to bring a Senate majority along with him, he’ll have a tough time getting any major legislation through the likely GOP blockade. So with less than six months left before Election Day, how does the race for the Senate look?

Short answer: It’s a toss-up. Democrats have a structural advantage going into this race, because they are only defending 12 seats to Republicans’ 23. Republicans are also defending a lot more Senate seats in swing states. Still, the GOP currently holds a Senate advantage of 53-47, so Democrats will have to win most of the competitive races to take back the chamber.

There are five races where analysts think control of a Senate seat is most likely to change hands. Of these, only one — Democrat Doug Jones’ seat in Alabama, which he won in an upset special election after his opponent Roy Moore was accused of sexually abusing a minor — is heavily favored to go to Republicans. If Democrats win the other four, which are currently all held by Republicans, the Senate will be tied 50-50. In that case, if Democrats win the White House, they’ll win the Senate too, because the vice president serves as a tie-breaking Senate vote if needed. This is Democrats’ easiest path to control of the chamber.

The four most vulnerable Senate Republicans — whose seats are currently deemed “toss-ups” by the nonpartisan Cook Political Report — are Martha McSally (Arizona), Cory Gardner (Colorado), Susan Collins (Maine), and Thom Tillis (North Carolina). All four states have voted for a Democrat in one of the past three elections, and they all currently trail their Democratic challengers in the RealClearPolitics polling averages of the race, though most races have only been polled a handful of times so far.

At this point, especially in the absence of comprehensive polling, one of the measures being closely watched is fundraising — and Democrats have pulled in serious hauls in all of the four key tossups. In Maine, a blue-ish state where Democrats have been salivating about taking on Collins for years, her challenger Sara Gideon raised a whopping $7.1 million in the first three months of the year. Collins raised only $2.4 million, although she still retains a slight cash-on-hand advantage.

Gardner has been similarly outraised in Colorado, where his challenger, the popular former governor John Hickenlooper, brought in $4.1 million in the first quarter to Gardner’s $2.5 million. The same trend holds in Arizona, where challenger Mark Kelly — a former astronaut and the husband of former Rep. Gabby Giffords — brought in a towering $11 million in the first quarter, nearly double McSally’s $6.3 million haul. McSally is a particular target because she actually ran for Arizona’s Senate seat in 2018 and lost to Democrat Kyrsten Sinema, but she ascended to the Senate a month later by political appointment after Jon Kyl resigned from Arizona’s other seat.

These fundraising hauls don’t mean anything definitive about the state of the race, but they provide a snapshot of the kind of energy that’s pushing the challengers, several of whom were obscure regional politicians before taking on vulnerable incumbents. Republicans will have to spend heavily to defend these seats, potentially stretching their resources thin.

There’s another major issue giving Republicans heart palpitations when it comes to Senate races: the coronavirus pandemic. As of two months ago, GOP senators planned mainly on running on the strong economy as an indicator of their performance. America’s humming stock market offered them something concrete to brag about, without forcing them to hitch their wagon directly to the president, who is unpopular in states like Colorado and Maine. But the pandemic has eliminated that option, and now the devastation coronavirus has wrought is instead the major story. The economy is in shambles, and the debate about how to rescue it while keeping people safe is the only issue most people will be thinking about for the rest of the year.

This doesn’t offer much of a life raft for Republicans eager to talk about something other than the latest Trump scandal. As Vox notes, many Republicans hoped to attack Democrats over their impeachment of the president. Now, though, that feels like a distant memory.For the time being, the federal response to the pandemic will continue to dominate the news, and its relative success or failure will likely be the defining issue for vulnerable Republicans with Trump at the top of the ticket.

To make matters worse for the GOP, those four seats aren’t the only ones where Democrats are playing offense. Of the 19 other seats Republicans are defending, only 11 are currently listed as “safe Republican” by the Cook Political Report. Three more — those held by McConnell (Kentucky), John Cornyn (Texas), and Lindsey Graham (South Carolina) — are all listed as “likely” Republican wins. But given the fact that these are seats in traditionally deep-red states, the fact that they’re only “likely” to stay in GOP hands is notable, as Democratic challengers have raised substantial amounts of money by people hungry to take on prominent national figures. Still, state demographics in these races heavily favor the incumbents.

That leaves five Republican-held seats that are listed as “leaning” Republican, per Cook Political Report, and one seat “leaning” Democrat, which is held by a Democrat. Of these five, one of the most interesting is in Kansas, where the retirement of longtime GOP stalwart Pat Roberts has left an open seat. According to most analysts, Democrats’ hopes of capturing this seat rest on what happens in their opponents’ primary. Kris Kobach, the former Kansas secretary of state and a close Trump ally, is currently neck-and-neck with his opponent, Roger Marshall, in the polls.

Kobach hasn’t had much success in statewide elections in Kansas: In 2018, he lost the governors’ race to a Democrat, Laura Kelly. If Kobach secures the Republican nomination, progressives hope that his weakness as a statewide candidate will continue.

Republicans may also have problems in Georgia, where they are defending two seats. While Georgia has been a red state for years, a large minority population and growing Democratic vote shares in the suburbs have left it tantalizingly close to turning purple. In 2018, Stacey Abrams, a former state representative, came within a few percentage points (and likely some voter suppression) of defeating Republican Brian Kemp for governor. What’s more, incumbent Sen. Kelly Loeffler is currently facing a scandal due to stocks she traded shortly after receiving a classified briefing about the coronavirus in January. If she’s successful in the Republican primary, it’s possible Democrats can seize on the controversy to give themselves just enough of an edge to win.

Another wildcard state is Montana, which, despite voting for Trump by double digits in 2016, has an idiosyncratic tendency to vote for Democrats in statewide races. Case in point: Steve Bullock, a popular former Democratic governor, has thrown his hat in to challenge Republican Sen. Steve Daines. While Bullock faces an uphill battle in theory, he led Daines in one recent poll. A win here, as in Georgia or Kansas, would give Democrats a much easier path to Senate control — and bring them one step closer to either being able to effectively corral a second term of the Trump presidency, or push forward a first-term President Biden.