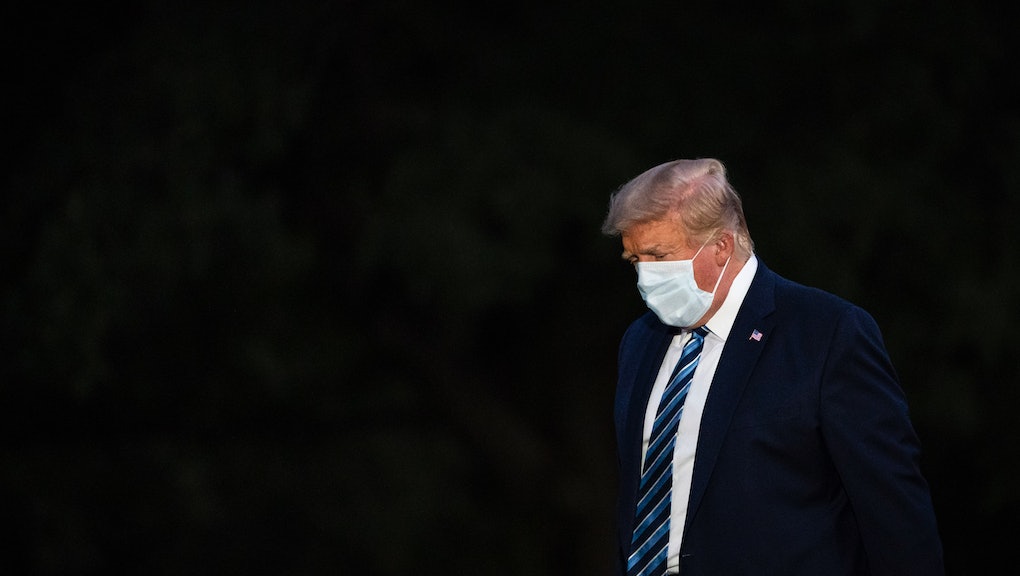 The second presidential debate will be virtual, so Trump says he won't do it

The coronavirus pandemic is necessitating a shift in how the presidential elections are approached. With President Trump's recent coronavirus diagnosis, nobody wants to risk election affairs becoming superspreader events — or, at least, most people don't. But on Thursday, Trump backed out of the second presidential debate after the Commission on Presidential Debates announced that it would be held virtually.

On Thursday, the Commission on Presidential Debates, which is nonpartisan, announced that Trump and Democratic presidential candidate Joe Biden would participate in the debate scheduled for Oct 15 "from separate remote locations," to "protect the health and safety of all involved." It's sound logic considering the coronavirus is highly contagious — and Trump is still actively battling it — but Trump isn't satisfied.

During an interview on Fox Business Network shortly after CPD's announcement, Trump said, "I'm not going to waste my time on a virtual debate. That's not what debating is all about. You sit behind a computer and do a debate. It's ridiculous. And then they cut you off whenever they want."

In a statement, Trump's campaign manager Bill Stepien claimed that Trump "will have posted multiple negative tests prior to the debate" and the "safety of all involved can easily be achieved without cancelling a chance for voters to see both candidates go head to head."

It's unclear what cancellation Stepien refers to given that a virtual debate is a debate. And ultimately, it was Trump who decided to pull out, with Stepien stating the president will "pass on this sad excuse to bail out Joe Biden, and do a rally instead."

In response to Trump's remarks, Biden said it would be "irresponsible" to comment on Trump's choice because "we don't know what the president's going to do. He changes his mind every second." However, Biden said he would follow CPD's recommendations.

This is far from the first conflict around campaign affairs and coronavirus. In June, Democrats announced their decision to officially take their convention virtual. Republicans, however, went ahead with a partially in-person convention in Charlotte, North Carolina. Afterwards, the Mecklenburg County Public Health Office, which covers the Charlotte metropolitan area, announced that 792 tests were conducted among attendees and two had tested positive.

While Trump can pull out of the debate if he wants, the decision to hold a rally is particularly questionable. Trump and first lady Melania Trump only tested positive for coronavirus last Friday. Just hours after announcing his diagnosis, Trump was sent to Walter Reed National Military Medical Center for a three-night stay.

Trump's attempts to bluster his way through his diagnosis don't beat science. But with a number of key Trump contacts now testing positive for coronavirus and a debate scheduled for next week, it's fair to be concerned about the health of anyone who is near him. If Trump holds a rally, he is putting not only attendees at risk, but also endangering anyone who must work the event itself.

Then again, this is all coming from the same man who posed mask-less for a photo op at the White House shortly after his release from the hospital and told his Twitter followers not to let the coronavirus "dominate" their lives. So is anyone really surprised?

More like this
Title IX will once again protect against gender identity discrimination
By Rafi Schwartz
Americans are feeling something weird and unfamiliar: optimism
By AJ Dellinger
In his first address to Congress, Biden took on the country's vices: guns and police brutality
By Rafi Schwartz
Stay up to date