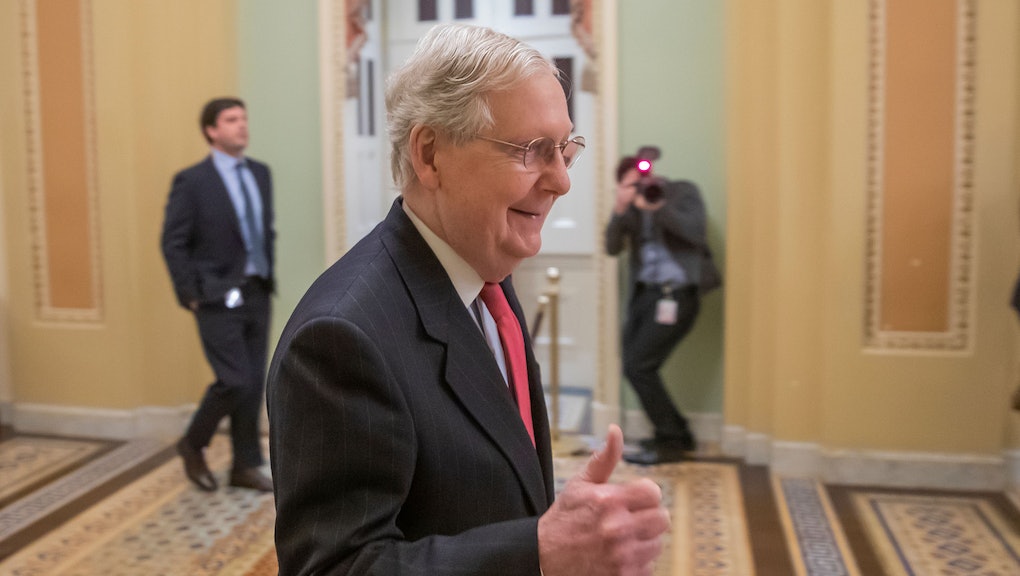 The Senate is moving closer to a vote on a massive bipartisan deal which will provide $2 trillion in aid to a country increasingly locked down under threat from the coronavirus pandemic. As the economy slows to a crawl, the stimulus aims to put money for essentials into people’s pockets and to prevent the economy from collapsing wholesale. The deal, which was reached in the early morning hours Wednesday during negotiations between Senate Republicans, Democrats, and the White House, will include direct payments of $1200 to many taxpayers and a $500 billion fund to bail out businesses.

“At last, we have a deal,” Senate Majority Leader Mitch McConnell said Wednesday. “In effect, this is a wartime level of investment into our nation.” McConnell told Republicans on a conference call that the bill would hopefully be up for a vote Wednesday, and House Speaker Nancy Pelosi is hoping to pass the bill in the lower chamber on Thursday via a process called unanimous consent, which would allow the bill to be approved without requiring members of the House to return from across the country.

The bill would be the largest relief package ever passed in America — much bigger than the 2007 and 2008 Wall Street bailouts.

“This is not a moment of celebration, but one of necessity,” said Senate Minority Leader Chuck Schumer. “To all Americans I say, ‘Help is on the way.’”

So what’s actually in it?

The text of the bill has not yet been released, but numerous reports have highlighted key portions. One of the headline features is the $1200 one-time payment that will be given to any American who made up to $75,000 on their 2018 taxes. The payment amount will be scaled back up to incomes of $99,000, and will not be disbursed to anyone who made more than $99,000. Families will additionally be given $500 per child.

The point is to provide immediate relief for those struggling with debt payments, rent, and essentials. While the payment will be a needed lifeline for many, critics aren’t happy with some key drawbacks. For one thing, a one-time payment may not go far enough. Despite President Trump’s claim that he will have the economy “opened up” by Easter — aka, three weeks from now — many leading medical experts and governors have projected a far longer timeline. That means that even if people are able to stave off this month’s bills with the relief package’s payment, next month’s may still be out of reach. Other countries have arranged for recurring monthly payments, including Canada, which will pay its citizens $2000 (in Canadian dollars) per month for four months.

Another criticism of the payment is that it will only be delivered in a timely manner to people who have their direct deposit information already established with the IRS. Those who don’t — which most likely includes poor people without bank accounts, who are the most vulnerable right now — could have to wait four months to receive their check, per reports. At that point, it might be nearly useless to them.

"It has unemployment insurance on steroids."

Another key feature of the overall package is the expansion of unemployment benefits. The federal government will provide workers who have been laid off with an additional $600 per week for four months, on top of the state unemployment benefits they will already receive, which range from $200 to $550 depending on the state.

"It has unemployment insurance on steroids," Schumer said Tuesday of the bill. "But, and most importantly, the federal government will pay your salary — your full salary — for now four months."

This is a bit of an exaggeration, at least when it comes to highly paid workers. But $600 a week is definitely as much as, if not more than, many Americans already make. Democrats also demanded that the bill expand the pool of people who are eligible for unemployment insurance, giving access to furloughed employees and freelance gig workers, including Uber drivers. Typically, only full-time employees are eligible for unemployment insurance.

After the deal was announced, several Republican senators objected to the size of the payments.

"This bill pays you more not to work than if you were working," said Republican Sen. Lindsey Graham (S.C.), who released a statement alongside Republican Sens. Ben Sasse (Neb.) and Tim Scott (S.C.). "You're literally incentivizing taking people out of the workforce at a time when we need critical infrastructure supplied with workers. If this is not a drafting error, then it's the worst idea I've seen in a long time," he said.

Graham’s argument — that giving laid off workers too much money would encourage them not to work — contains an obvious fallacy, which is that people cannot lay themselves off. Those who quit their jobs wouldn’t be eligible for the benefits.

This dispute threatens to overturn passage of the bill, which had been expected to sail through the Senate. Vermont Sen. Bernie Sanders called the Republican opposition an “outrage” and said he is “prepared to put a hold on this bill” and lobby for tighter restrictions on the corporate bailout angle of the bill if the unemployment provisions are weakened.

The bill also provides for emergency small business loans to be issued to companies as long as they don’t lay off any workers. The loans will be available until June 30. While the term “loan” is used, the offering is in fact more like a grant — as long as the employers continue to pay their workers during the pandemic, the loans will be forgiven afterwards. It’s basically free money to help keep workers on payrolls.

“There is broad general agreement that small businesses in this country will not be able to survive unless there is extraordinary assistance,” said Republican Sen. Marco Rubio (Fla.), who worked with Democrats on crafting this part of the legislation. “The goal is to keep employees connected to their employers, so that people aren’t just having to stay home and aren’t just feeling the stress of being laid off, but the uncertainty of whether they’ll even have a job to go back to.”

Another hugely consequential — and very controversial — element of the bill is the massive corporate bailout fund. Money from a $425 billion fund operated by the Federal Reserve, which created the fund after the Wall Street crash in 2008, will be available for loans to companies facing bankruptcy. Another $75 billion will be earmarked for loans aimed at specific industries that have been hit hard by coronavirus, including airlines and hotels.

In earlier drafts of the bill, Republicans wanted Treasury Secretary Steven Mnuchin to be solely in charge of determining which companies could receive loans from the fund. Earlier versions also allowed for a six-month period of secrecy before Mnuchin would have to make public the names of the companies that received the help. Angry about what they called a “slush fund,” and concerned that the fund could be used to personally enrich the Trump family, Democrats held up the deal and negotiated for increased oversight. There will now be immediate disclosure of where the money is going, and a congressionally appointed oversight board will monitor the distribution of the funds. In addition, a provision in the bill expressly prohibits bailout funds from going to companies controlled by the president or his immediate family, including his son-in-law; call it the Kushner Clause.

Finally, the bill will provide $100 billion for hospitals and health systems across the nation. The New York Times reports that Schumer told Democrats in a letter that the package includes money explicitly designed to give hospitals the ability to buy personal protective equipment, testing supplies, and increased beds. A devastating shortage of supplies has hamstrung the U.S.’s response to coronavirus, and local and state politicians like New York Gov. Andrew Cuomo have been begging the federal government to provide needed medical equipment. Last week, Trump signed the Defense Production Act, which gives the executive branch broad authority to made companies produce needed health care supplies, but declined to immediately invoke it; the head of the Federal Emergency Management Agency finally announced Tuesday that the DPA would be used to produce additional coronavirus test kits, but not desperately needed ventilator machines.

Of course, all of this is relative, because the bill’s future depends on Republicans being able to get over their intractable urges not to give poor people respectable amounts of money, and Democrats being willing to negotiate with them. Unless the Senate is able to back down from its tendencies toward brinksmanship, debates about bailout oversight and taxpayer aid will be moot.