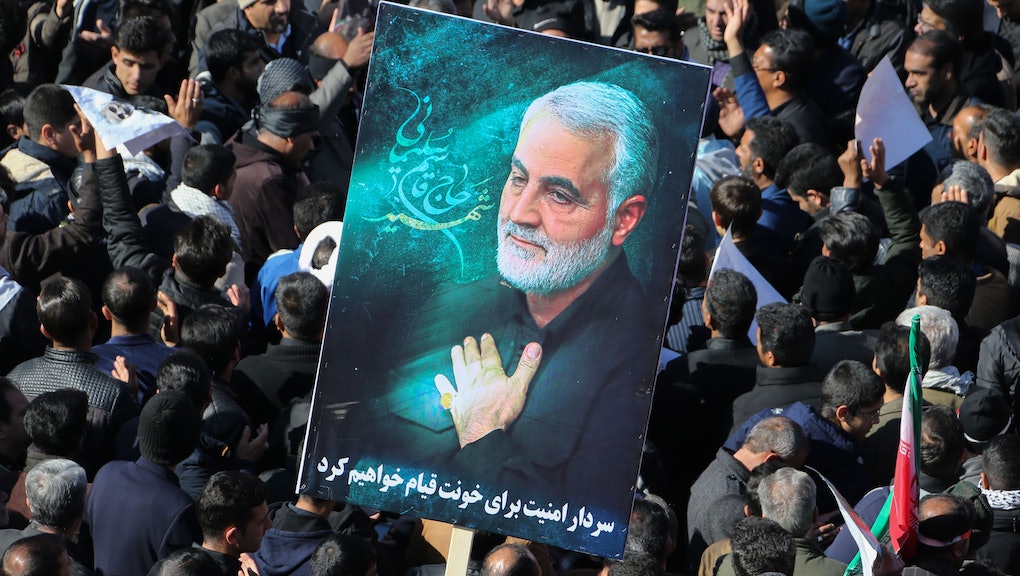 The sloppy aftermath of the Soleimani assassination

Did a single person in the Trump administration think this through? That’s the undeniable question that emerges while sifting through the dozens of harrowing headlines that have emerged in the wake of the president ordering the drone strike assassination of one of Iraq’s most prominent military leaders, Qassem Soleimani. The fear isn’t just the result of the bellicose rhetoric issuing from Iran, where millions have taken to the streets chanting “death to America,” and the Ayatollah Ali Khamenei has declared that retaliatory attacks will be coming soon. It’s also a byproduct of the frankly bizarre amount of sloppiness that’s spilled out in reports about how the Pentagon and the White House have handled arguably the president’s most brazen military attack on another country thus far.

The most important question underlying this entire incident emerged as soon as the drone strike hit: Why exactly was Soleimani killed, and why now? Explanations from the White House and the Pentagon have been vague at best, and actively contradictory at worst. The foremost line from President Trump is that Soleimani was planning "imminent and sinister attacks on American diplomats and American personnel, but we caught him in the act and terminated him."

But so far, no details of these so-called planned attacks have been released. Pressed for specifics, Secretary of State Mike Pompeo has retreated into mealymouthed semantics that have made the existence of any concrete plans seem increasingly unlikely.

Speaking on C-SPAN, Pompeo seemed to lay the blame for the assassination on the death of an American contractor in Iraq at the end of last year — an incident the United States has pinned on militias connected to Iran. “We know what happened at the end of last year, in December, ultimately leading up to the death of an American,” Pompeo said. “So if you’re lookin’ for imminence,” Pompeo continued, “you needn’t look no further than the days that led up to the strike that was taken against Soleimani.”

In other words, Soleimani’s assassination was actually retaliation for past violence, rather than prevention of future attacks. It seems Pompeo has a flawed understanding of the definition of “imminent.” It’s hard to read his statements as anything other than the tail wagging the dog, inventing a post hoc justification for a rash military act by the president.

The administration has continued to search for more justifications for why Soleimani deserved to die right now. There’s no arguing that as Iran’s top military commander he orchestrated schemes that led to the death of American soldiers abroad. But that’s been the case for years, and the Trump administration has failed to offer a cogent argument as to why the president authorized his assassination at this precide moment in time. Vice President Mike Pence claimed on Twitter that Soleimani “assisted in the clandestine travel to Afghanistan of 10 of the 12 terrorists who carried out the September 11 terrorist attacks in the United States.” But The New York Times points out that the official 9/11 Commission Report disputes this, noting, “We have found no evidence that Iran or Hezbollah was aware of the planning for what later became the 9/11 attack.”

A clearer picture of how the Soleimani strike came to be emerged from a Times report claiming that the assassination was the most “extreme” of a “menu of options” for dealing with Iran that military officials presented to Trump. According to the newspaper, the assassination was only included in the list in order to make the less severe options seem more appealing. The Times asserts that this is a common practice for military leaders when advising presidents, and reports that both Presidents Barack Obama and George W. Bush steered clear of targeting Soleimani, believing an attack on him would be too “provocative.”

Clearly, that’s not something that Trump especially cares about. Taken together, Pompeo’s statements and the Times report seem to paint a picture of an assassination that was carried out more as a general affront to Iranian aggression than an actual targeted attempt to save American lives from some imminent plot. This raises one frightening possibility: Trump may not have really known or cared to find out just how significant a figure Soleimani actually was. After all, Trump received wide praise in the wake of ISIS leader Abu Bakr Al-Baghdadi’s assassination earlier this year; perhaps he figured this would be a similar scenario. But they are not the same. The killing of an outlaw terrorist leader has wildly different foreign policy implications than the assassination of someone who is considered to be equivalent in stature within Iran to a vice president. Consider the fact that Khamenei openly wept over Soleimani’s casket, while possibly 1 million mourners gathered in the streets to protest the general’s death. Yet understanding these kinds of nuances is not something Trump has shown much interest in previously.

The sense of haphazard planning has lingered. On Monday, an unsigned draft letter from the U.S. military to the Iraqi government, which stated that U.S. troops would be withdrawn from the country “in a safe and efficient manner,” was leaked. The Iraqi parliament had voted to expel U.S. troops after the Soleimani strike, which occurred in Baghdad and which Iraq saw as a violation of its sovereignty. Shortly thereafter, though, the U.S. military said that the letter was actually a “mistake” and that no troops would be withdrawn. Mark Miley, the chairman of the Joint Chiefs, told reporters at a hastily arranged Pentagon press briefing that “the letter is a draft. It was a mistake, it was unsigned, it should not have been released. ... [It was] poorly worded, implies withdrawal, that is not what's happening." This is not the kind of high-level coordination you might expect from the world’s most fearsome fighting force in the wake of high-profile assassination.

Similarly, the White House has struck controversial and confusing notes regarding whether or not it will be attacking Iranian heritage sites. Initially, Trump threatened that any attack against American interests would lead him to retaliate by striking any of 52 identified targets, some of them “important to … the Iranian culture.” This constitutes a war crime under international law, and after the president’s comments sparked a major outcry, Defense Secretary Mark Esper claimed that in fact, no cultural sites would be targeted. “We will follow the laws of armed conflict,” Esper said. But he later doubled down on threats, appearing on CNN on Tuesday and saying, “We are not looking to start a war with Iran, but we are prepared to finish one."

Late Tuesday, it was reported that Iranian missiles had targeted military bases in Iraq where American troops were stationed. Surreally, the president tweeted of this bombing of U.S. soldiers: "All is well!" He added, "Assessment of casualties and damages taking place now. So far, so good!" There are no reported deaths, though Trump declined to address the American public Tuesday night after it was originally thought that he would speak on the attack.

Ultimately, all of this sloppiness may be besides the point when it comes to the real stakes of all this: whether or not the U.S. and Iran will end up at war. As much as the White House providing haphazard, shifting explanations for its rash actions may spark outrage, that’s unlikely to convince Trump’s loyal masses that following the president into battle isn’t a good idea. The only people who are likely capable of doing that are other Republicans who want to avoid a new conflict in the Middle East, which leaves open the terrifying possibility that the person most uniquely capable of preventing World War III is noted anti-interventionist Tucker Carlson. God help us all.