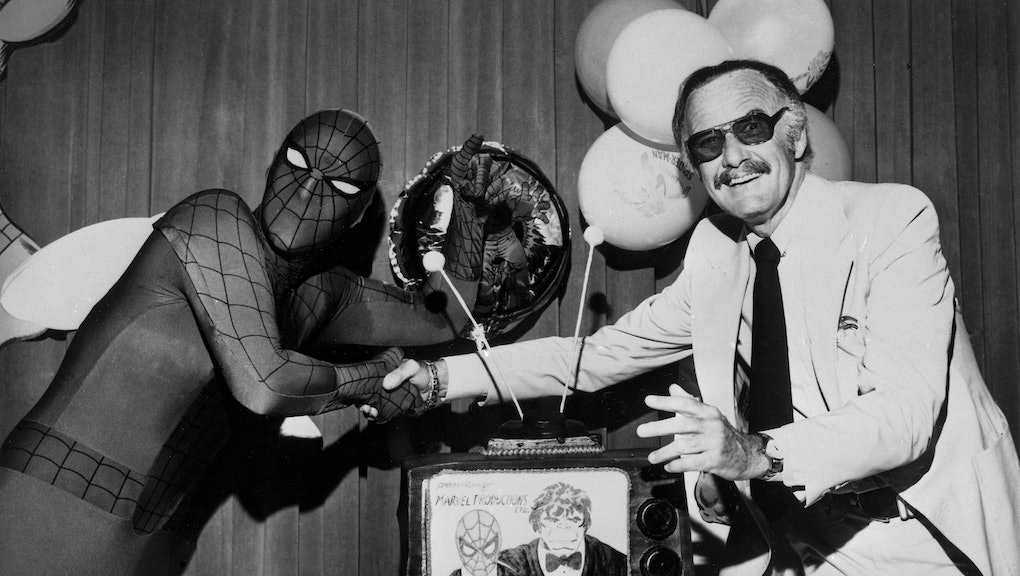 If you believe that comic books can embody broad societal trends, that their twisty madcap continuity is incubator for even more complex narratives, and that a childhood spent among merry mutants, monsters, and Avengers prepares the emerging intellect for the pleasures of literature, then you can count yourself as the kind of True Believer that Stan Lee, the great doyen of American comic books, had in mind in a famous 1967 dispatch from “Stan’s Soapbox.” Reprinted in the same comics he co-created as a sprightly young playboy, it read in part:

Many of you unsung heroes have […] inquired whether we take them seriously or just treat ‘em as a patently pointless put-on! Well, just for the record, Charlie, we BELIEVE in our swingin’ superheroes! We created them — we live with their adventures — their hang ups — almost 24 hour a day […] It’s the REAL world we have our doubts about — but that’s another story!

For Lee, who died in 2018 at the age of 95, the escapist entertainment offered by The Amazing Spider-Man, The Incredible Hulk, and Daredevil, the Man Without Fear had the potential to approach the prestige of high art. Never mind that such heights were seldom realized by the comic form, designed to be both disposable and immediate. But there have been occasions when they seemed to come close. Chris Claremont was the first writer to reinvent the X-Men as proxies for queerness; Jim Starlin’s lysergic Warlock series took Jung's collective unconscious to the cosmos; and Walt Simonson’s run on The Mighty Thor meshed mythology and anxious modernity well before Neil Gaiman and company perfected the formula.

Compared to these, Lee was down-to-earth. Always ready with a corny catchphrase (Excelsior! Face Front! ‘Nuff Said!) and his signature style (cigar, salt-and-pepper hair, Cartier Vendome sunglasses), his was an avuncular presence in bedrooms across the multiverse. He could also be an exceptional grump. Witness the epic shade on display in a video called simply “Stan Owns.” Looking over the shoulders of upstart illustrators Todd McFarlane and Rob Liefeld as they sketch the kind of testosterone-addled, gun- and pouch-toting antihero that personified 1990s excess, he quips, “I think it’s very impressive that in a matter of 20 minutes you can come up with something like this. I mean, bad as it is, it’s still impressive… I think it takes you longer to sign your name than draw a picture.” And then the coup de grâce: “Incidentally, you guys have ruined us. We’ve decided to give up comics and go into showbiz.”

Taking comic books from kiddie stuff to more sophisticated drama was its own claim to fame. And all Stan Lee had to do to get there was dick over his brother, sign his name to the work of his peers, and perpetuate a long-running fraud in the public eye.

Poor Stan. He didn’t ask for this. He just wanted to tell morality tales about radioactive spider-people and Iron Men. Only in his wildest dreams did he envision that the Marvel universe would become a multi-billion-dollar enterprise, not just a calling but a whole lifestyle bedecked in spandex and vibranium. Not that he didn’t give Alfred Hitchcock a run for his money in the cameo game: The best of these, from Guardians of the Galaxy 2, has Lee in a spacesuit, presumably marooned on a distant world, jabbering away at a trio of weary extraterrestrials: “Hey, ah gee, I’ve got so many more stories to tell!” This is Stan Lee as astral troubadour. He’s Orpheus, he’s Scheherazade. The buzzkill is that, unlike them, Stan Lee was real. So where is the man behind the legend? Well, that’s where things start to get sketchy.

In True Believer: The Rise and Fall of Stan Lee, Abraham Riesman makes a good faith effort to untangle Lee’s legacy from the Gordian knot of hearsay, obfuscation, and outright lies — many of them perpetuated by the man himself. Born Stanley Martin Lieber to Romanian Jews who escaped a pogrom in their native country, the man who would become the marvel was educated at the Bronx’s DeWitt Clinton High School alongside James Baldwin and dramatist Paddy Chayefsky, and where future comic legends Will Eisner, Bob Kane, and Bill Finger had only recently graduated. After getting his start in comics refilling ink wells, he served in the same Army division as Frank Capra, Charles Addams, and Dr. Seuss, before returning to Atlas Comics where he toiled as a journeyman writer of cheap westerns and pulp horror (the name change had been devised so as not to sully Lee’s given name) before teaming up with pugilistic artist Jack Kirby under the newly minted Marvel Comics banner.

Riesman’s Lee is an all-American flim-flam man, a huckster, and an accomplished liar whose many deceits have all-but-obscured the reality.

Lee and Kirby’s tense Lennon/McCartney relationship would result in the creation of the Fantastic Four, Thor, and the X-Men while Lee teamed up with an Ayn Rand-worshipping tightwad named Steve Ditko to create Spider-Man. From the get-go, Marvel heroes were damaged goods, imperfect and angst-ridden outsiders that appealed to the 60s counterculture. From 1962 to 1971, Stan Lee oversaw comics’ Silver Age as editor-in-chief. It may not have been the literary success of young Stanley Lieber’s dreams, but this was the era of pop art; taking comic books from kiddie stuff to more sophisticated drama was its own claim to fame. And all Lee had to do to get there was dick over his brother, sign his name to the work of his peers, and perpetuate a long-running fraud in the public eye, where he successfully posed as sole writer-creator of Marvel.

The first thing you learn about Stan Lee is that you don’t really want to know about Stan Lee. Riesman’s Lee is an all-American flim-flam man, a huckster, and an accomplished liar whose many deceits have all-but-obscured the reality because the more sanitized fantasy version is the better story. To say that Kirby and Ditko went to their graves still craving credit for their work is an understatement — Kirby and his estate would wind up in court more than once — but the survivors aren’t any more forgiving when it comes to the question of Lee’s intellectual property.

True Believer takes up the cause of Lee’s pitiable younger brother Larry Lieber, who toiled on bottom-rung romance comics, all-but-ignored by his more flamboyant brother, barely scraping by on a meager existence in the elder sibling’s shadow. Again and again, Lee is “propagandist,” “blow-hard,” “self-promoter,” the billion-dollar question of his authorship impossible to decipher. Part of the problem is the “Marvel Method,” in which the writer would give the artist a vague outline of how a given story should go, after which the artist would sketch out the requisite panels, leaving the artist to go back and fill in the word balloons. Nobody, writer or artist, had any ownership of a given character, contracts left creators in the lurch and hamstrung any attempt at collective bargaining, so there was no comics union to protest if and exaggerated for the benefit of “a credulous public” what may have been nothing more than a little light editing of Kirby’s visionary output. Another disgruntled creator, Joe Simon, even sought vengeance in the pages of a Mad Magazine clone called Sick in 1966, where he drew a strip called “The New Age of Comics,” featuring unscrupulous overlord “Sam Me,” in a superhero costume sporting a dollar sign on his chest.

And so Lee’s star rose at the expense of the friends he betrayed, the egos he injured and, after his eventful 1960s career, he largely became a mascot for Marvel, resented by all who knew him. Riesman gives us a few nice moments: There’s Federico Fellini dropping by the office to pay his respects (“I like very much your comics. In one hour, I come see you, yes?”); Lee’s charming college lecture circuit beginning with Bard College in 1964; a few scenes of the gosh-wow genesis of Dr. Strange, the Silver Surfer, or Captain America, the latter rescued from his WWII heyday as the champion of a more complicated country. But overall, Riesman leaves us with the impression that heroes only exist on the page; to paraphrase Doctor Doom in a popular meme, the self-mythologized man “toots as he pleases”; and to have any identity at all is to have a secret identity.

When it comes to Lee — whose unfortunate last years were riddled with manipulative grifters, opportunists, and sycophants — and his insistence on having the last word regardless of the enterprise in question, I can’t help but think back to an installment of Epic Rap Battles of History where the Marvel honcho is pitted against Jim Henson, who rhymes:

Let me mention / I’m impressed with all the vision that it took / for you to sign your name / On all of Jack Kirby’s comic books.

Their battle ends in a draw as they are interrupted by the only real winner here — Walt Disney:

Get back to work / that’s my dime your wasting / I didn’t buy you for billions / So you could play around debating / You belong to Disney / Which means you stay busy / cranking out magic / and assembly-line whimsy.

And so, in the way of all things, what begins as a dream, a sketch, an origin story ends as filthy lucre, and to buy in is to sell out. In the words of Stan Lee: “’nuff said.”